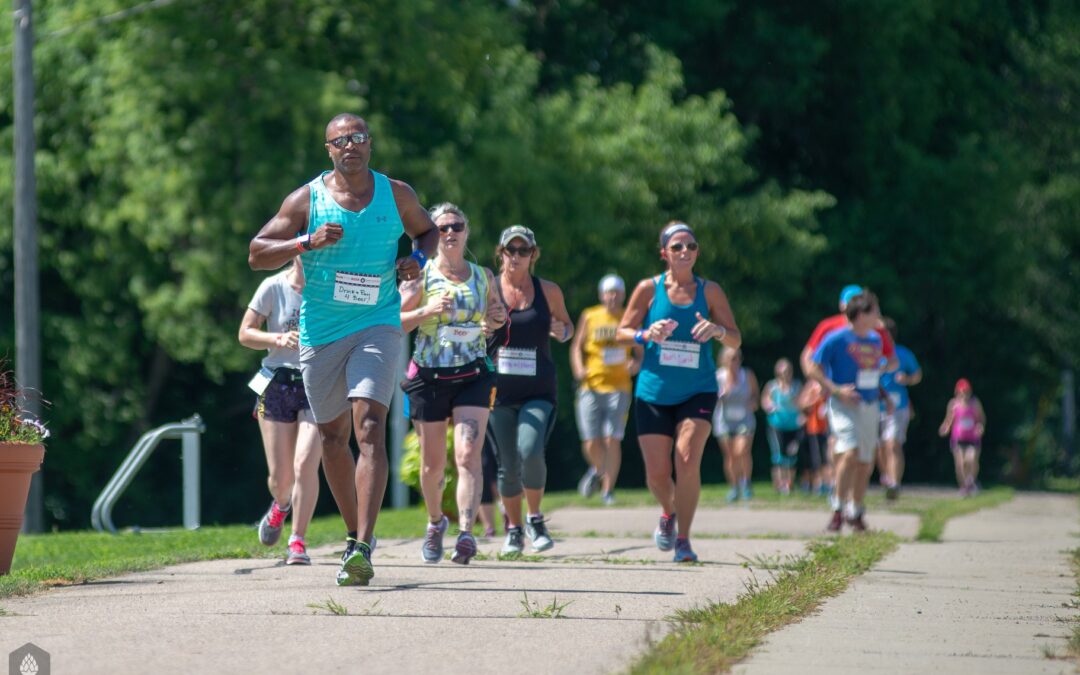 One not-so-scientifically proven way to make beer taste better is to gulp it down at the finish line of a 5k race with friends.

The Brewery Running Series is a national group of fun runs that began in 2012 in Minnesota and now hosts events in 18 states. At the runs, participants cover about three miles however they want and then celebrate their achievement with some local brews.

Tanner and Lindsay Mason first participated in a Brewery Running Series event while living in Illinois, which has a local chapter of the group. Both enjoyed casual 5Ks and said the events were fun “whether you’re a runner or not.”

When the husband and wife pair moved to Virginia, they sought out the events in their new home state, but they discovered Virginia did not yet have its own outpost of the group. They decided to found their own branch in December 2019, with the first races coming in March 2020.

And then the pandemic hit.

“We did have a big organization to help us guide through it,” said Tanner Mason, talking about guidance from the Brewery Running Series national group. “It definitely made our first season quite a bit smaller, but it worked out. We were able to social distance.”

The untimed fun runs in 2020 typically included between 20 and 50 participants, though both say they expect that number was lower due to Covid, and attracted people with a range of skill levels. While some runners can cover the three miles in an impressive 20 minutes, others came in groups of friends and family to walk the entire route.

In fact, the 5k is optional, according to Lindsay Mason. Some participants just come to cheers others.

In its first year of runs, the group covered nearly 600 miles and drank almost 200 beers, according to stats on the series’ website.

They’ve also donated nearly $400 to local non-profits in an effort to give back to the community. Some groups they’re working with this year include the Richmond Animal Care and Control Foundation, a shelter that takes in all stray animals regardless of health or behavioral problems, and Keep Virginia Beautiful, a non-profit working to protect the state’s outdoor spaces by preventing littering and promoting recycling.

Lindsay Mason said they look for breweries to host events that are interested in more of a long-term partnership that also helps support the local brewing scene.

“We’re pretty open to any breweries that are willing to work with us.We’re trying to create more of a partnership, not just use their venue space,” she said. “We’ve even made friends out of it. It’s fun getting to know people working at the breweries.”

All the breweries that hosted runs in 2020 are also back on the 2021 schedule.

In looking for breweries to partner with on events, they’ve also become new beer fans themselves.

“The beer here is so good,” Lindsay Mason said, adding that they’ve been exploring breweries along the Loudon County bike path near their home in Sterling.

The Virginia chapter is planning 10 events this year on Saturdays in April, May, September, October and November. Most fun runs began at 11 a.m. and take place all across the state, including in Northern Virginia, Richmond, Williamsburg and Charlottesville. Once runners check in and get their race swag, they cover the three-ish miles however they want, then enjoy some beers with friends. Registration for the run itself and your first beer is $30, but participants can also add on additional swag like a series t-shirt.

May 8, Board Room Brewing Co (Clarendon)