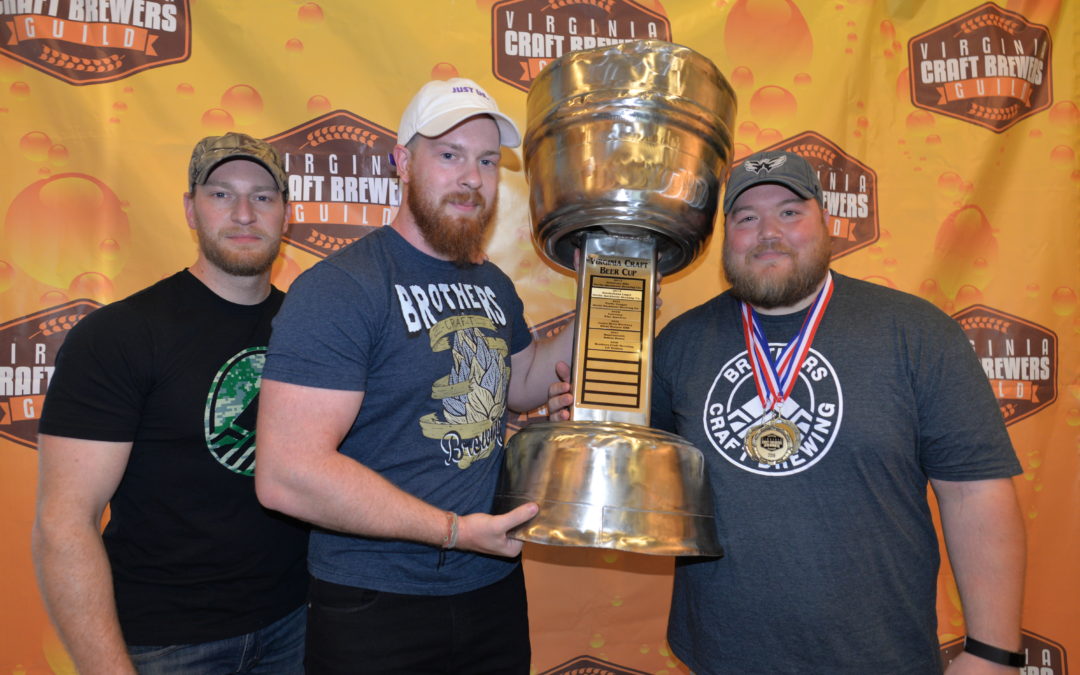 As major restructuring of the annual Virginia Craft Beer Cup is taking shape, I caught up with Virginia Craft Brewers Guild President & CEO Brett Vassey to discuss the changes as well as a few topical items of importance to the industry.

Vassey had a lot to share, so let’s get to it.

Can you give us an update on the 2019 Virginia Craft Beer Cup competition and festival?

This year we’ve now opened registration for the Virginia Craft Beer Cup. This is our eighth year.

We are expecting to judge over 400 beers this year — a record number of beers.

We’ve had a whole bunch of changes we’re very excited about. One is bittersweet: our head judge, Tom Cannon, has retired after five years. We’re proud of his service as our head judge.

We have a new judge, Anna Shore, and we’re excited about her leadership. She’s been a judge for the Cup in years past. She’s also the head judge for the Dominion Cup, so she’s got a tremendous knowledge in the BJCP rules.  All judges have to be BJCP certified. We believe we’re the only Guild in the country that runs it in this nature for this long.

So, we’ve had about 100 breweries registered. Judging is on June 8.

This year we are making some major changes in the recognition program. One, we are creating a set of labels that winners will be able to use in all of their branded materials.

Number two, we’re trying to create the best of GABF (Great American Beer Festival) and CBC (Craft Brewers Conference) at the national level all in one event in Virginia.

What we’re doing is rebranding our day of programming around technology, distribution, quality, safety, all the things we do as far as workshops at our annual meeting. We’re rebranding that the Virginia Craft Beer Conference.

This year we’ve created the very first annual Virginia Craft Beer Cup Gala. It will be a stand-alone event in the evening at Tredegar Iron Works in Richmond. We’ll have production on our awards ceremony.  We’re making this a very exclusive event; very highly produced. Really trying to raise the bar on quality of recognition and the use of the Cup as an opportunity to build market opportunities and public awareness for brands.

What is the date of the Conference and Gala?

The Conference and the Cup Gala are June 17.

In addition to a conference and awards ceremony, the Virginia Craft Brewers Guild has produced a festival open to the general public. The past two years the event was held in downtown Charlottesville. Is such an event planned for 2019?

We’ve not released our event calendar for the year. We’re still working on all of our events.

What we’ve done this year is we decided to make a substantial investment in expanding our events and the types of events. We’re working on two new events. We don’t have all the dates and times yet.

The Brewers Association reports that 60% of Virginia craft breweries have adopted the official Independent Seal. The cost is free. How can the Virginia Craft Brewers Guild work to increase that number closer to 100%?

That’s a good question. That is actually one of our strategic goals of our marketing and tourism committee. It is to gain 100% adoption by brewers of that label.

We really have a two-pronged approach to this. One is to get all of our members to include it in their labeling and social media. Those who don’t distribute should at least recognize it in their tasting rooms to educate the public. That’s a second goal.

The third goal is we decided one of the most important things we want to do in the next two to five years is to build-out our own retail relations program. It will start with the VIP buyers (retailers) at our Cup. We want to educate them to educate the consumer to look for the seal. It just takes time, volunteers and consistent messaging.

We think it will take a couple of years to get the first to goals accomplished.

There are new happy hour laws going into effect in July in Virginia. Does the Guild leadership have a stated opinion on the impact of these laws on breweries and will this improve relationships with the Restaurant Association?

We are absolutely 100% in support of the expansion of the happy hour law. We lobbied it. We actually put resources into lobbying that bill in the General Assembly. It was one of our priority bills for this session for the Guild.

We also will be working with the Virginia ABC on the rule making process; there’ll be either a set of guidance documents or a circular that’s going to be developed on the tasting room regulations. We’ve already met a couple of times with the ABC on what we would want to see in those guidance documents as it pertains to (brewery) tasting rooms.

As far as retailers, we’ve been working very closely with individual retailers and trying to educate them on how we can support that regulation. We all came together around that in a very positive way. It was a win-win for retailers and brewers.

What is the general consensus among craft brewers you’ve talked to lately: Are we still in that euphoric the sky’s the limit stage or are there concerns about a quickly maturing industry?

Over 80% of our members in this last survey responded not only do they feel positive but they plan on expanding production.  As far as euphoria it does continue.

Perspective is important here. When you’re small making a few hundred barrels is an exciting expansion. It’s a little more difficult for the larger guys. The larger brewers are still growing but it’s a lot more challenging because of the competition in the (Virginia) marketplace and from out of state, particularly imports.

Packaged beer is just becoming very competitive as far as grocery store chains. Bottle shops are still good opportunities for our larger members and those looking for new packaged beer.

The bottom line is our industry builds on the success of how we brand ourselves in our tasting rooms. The vast majority of brewers see the tasting room as the way they get brand awareness, consumer buy-in, and then distribution comes after that.