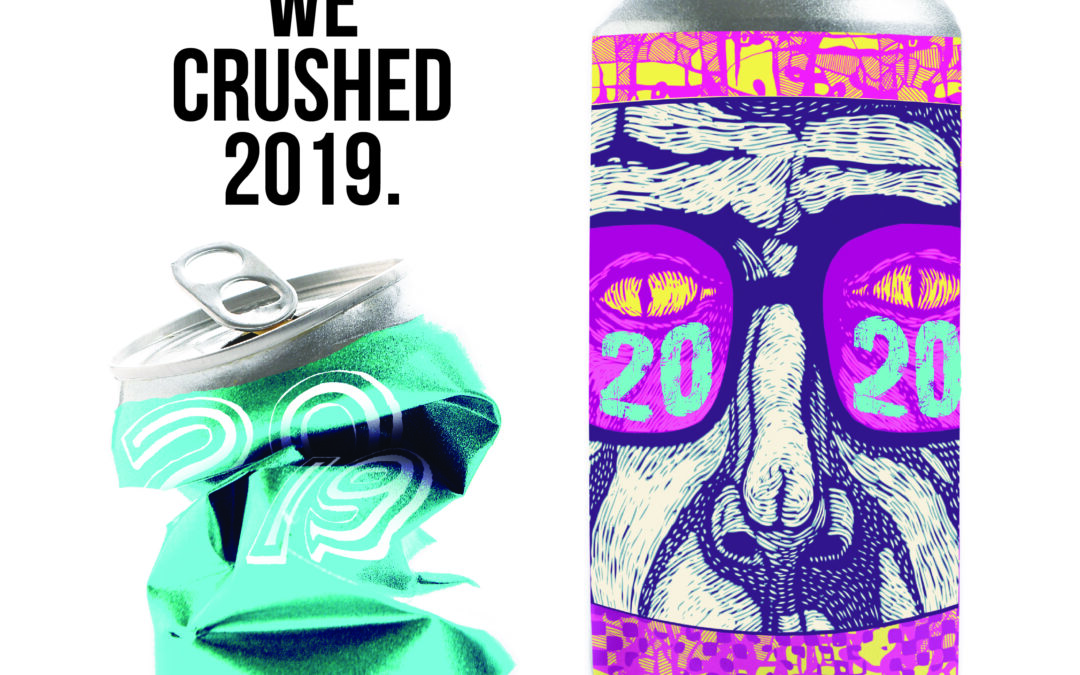 It has become an annual tradition where we sit down with Brett Vassey, President & CEO of the Virginia Craft Brewers Guild and Virginia Manufacturers Association, to get his knowledgeable insights and analysis of the current year and the upcoming 12 months of the Commonwealth’s independent craft beer industry.

Here’s an excerpt from our conversation.

VCB: Looking back at 2019, what were the key accomplishments of Virginia’s craft beer industry and the Guild?

Brett Vassey: From the industry overall, despite some of the conversation about the industry’s saturation, we continue to grow. Virginia continued to add breweries; more on the nano variety. Barrelage continued to increase as well.

We don’t know the exact data yet. The data from the BA (Brewers Association) will come out toward the end of the year.

We think we’ll be near number 12. For us, that’s pretty exciting, just continuing to see the growth despite folks being concerned about saturation nationwide.

It is getting harder though. There’s no question.

We see, particularly in the Richmond market, Hampton Roads market, there’s a lot of competition intra-industry and then, also from out of state. That’s something we’re watching for in 2020 and beyond.

We still have 20 to 30 jurisdictions without craft beer within a 30-mile radius. We still have some opportunities around the state.

As far as the Guild, we continue to grow the resources of the Guild to not only cooperate with the BA, but also to be able to develop more of our own resources for members to help them grow and compete.

One of the things we do that we think really helps distinguish true independent craft beer in the marketplace is the Virginia Craft Beer Cup. We’re, quite frankly, just incredibly proud we are one of the only guilds in the entire United States that runs such a competition.

We have near double-digit growth in participation and it gets more sophisticated every year. This year, we were able to take the next step in improving knowledge in the marketplace of these great products, in particular these winning breweries and beers, by starting the Virginia Craft Beer Gala.

The Gala was our very first attempt to mimic the GABF (Great American Beer Festival) at the state level. It was a raging success.

And, Jeff, largely to you all thank you so much for being our media partner in that because the aftermath of that and the distribution of the video has gotten so much attention. Our national organization looked at that as a model.

The second thing we’re really proud of is we’re trying to improve grassroots advocacy and awareness of all of the political change going on that’s making folks nervous. Is craft beer still going to have the same cache in the political environment that it’s had in the past nine years?

What we’ve started is a “Be a Brewer for a Day” program. We had our first event at Trapezium. It was a great success. We’re actually going to present our program at the national guild’s conference. We hope it is going to be featured in the national magazine as a best practice.

It’s how we coach members how to bring-in leaders and show them what it means to be a brewer. Just the regulatory compliance alone baffles people as to how much you have to invest both in terms of capital to make beer and government compliance to produce and distribute beer.

Legislatively, we have about a dozen legislative and regulatory issues pressing on the industry that we’ve invested an inordinate amount of time into. Most notable, we have successfully negotiated with the ABC and a large coalition of stakeholders in the alcohol industry for the complete reformation and restructuring of all permit fees and licenses at the ABC. That will be the principle bill we work on in the next General Assembly session.

It took over a year and we made it through with no increases in fees and hopefully an improvement in the process and in service. That rarely happens in government.

VCB: You mentioned the Gala and Cup competition, do you have a date and location for 2020?

BV:  We’re still going to do it in June. That’s the date that works best. It gives us the chance to hold the judging in late April, early May and then be ready for the Gala in June.

It will be a Richmond location. We try to be within a couple of hours of every member. Richmond is the preferred location for our members.

VCB: The Guild has produced a festival in the past to showcase the winning beers. You have considered multiple regional festivals as well. Where is the Guild’s thinking on a promotional festival?

BV: Where we are now is we have spent the better part of a year surveying members, working through our marketing and tourism committee…the sense is the large beer festival market is so saturated and, quite frankly, are not profitable for the most part.

Our future plan is to rather than have one festival, we’re leaning toward having a series of regional events that are unique, different than anything else going on, and that are co-located with another activity.

For instance, this year we added the Virginia International Raceway. That was co-located with a qualifying race program. We have had a partnership with the State Fair for years. That doubled in attendance this year. That has worked for us very well.

That’s the model we are most comfortable pursuing — to work with partners where there’s a mutual benefit and spread the fest into multiple events around the state because everything’s becoming hyper regional.

The majority of our members do not distribute their beer so they are market specific. It makes more sense for us to highlight the beers in the regions where they are produced and where their taprooms are.

VCB: Do you see satellite locations continuing as breweries seek to expand their brand identity into other markets across the Commonwealth?

BV:  We actually see the expansion brewery model continuing into the future because it is the principle way that…if you want to go from a small brewery to medium sized brewery that is the way you can grow the fastest.

Then, you have the large breweries like Starr Hill. It’s just a reinvention of their business model. They’re primarily a distribution brewery. So they’re returning to their roots by coming back to an entertainment-style facility with a concert hall and a rooftop deck. It’s amazing.

VCB: Just a few years ago large brewing conglomerates were acquiring successful regional craft breweries such as Wicked Weed and Devils Backbone to add to their portfolio of beverages and give them a footprint in the craft beer market. The Brewers Association and independent breweries refer to them as “crafty” brands. Do you think this strategy has plateaued?

BV: I think it is always possible the multinational brewers will look at acquisition as a way to grow. That’s just their normal business model. I don’t think that’s going to change.

As far as the scale and intensity, it does seem to have slowed down.

VCB: This year we had some surprise brewery closures with Mad Fox being the big shocker. Is that a troubling trend or do you see these as more isolated and situational incidents?

The Mad Fox scenario is heartbreaking for us because Bill (Madden) was a founder of the Guild. He was one of our 11 founders and the core of our leadership, particularly around our Cup competition. That one really did surprise folks. It resonated broadly and had folks really rethinking, do we have the best business model? Let’s tighten things up and be as lean as possible.

He had a very complicated business model. He was a brewpub, but he also distributed and then two years ago, invested in a taproom in Washington, DC. The District can have taprooms. You don’t have to have a brewery co-located with your retail. You can just setup, basically, a bar and ship your beer in and sell it.

He did setup a taproom and that didn’t work.

If you have a really good business plan, have a great tasting room and constantly making new beer and attracting new customers and you understand your tourism and your entertainment function — that’s now part of brewing — small breweries are going to be okay.

For distributed beers, it’s getting harder and harder to break through because there’s only so much shelf space and taps. Those folks are in a hyper competitive market.

VCB: Brothers Craft Brewing seemed to really engage with the Harrisonburg Downtown Council  to expand the visibility of its Resolute Weekend. Restaurants and retailers were approached as extended participants. Do you see this approach as a model for the future in small downtowns?

Over 70% of our members have a relationship, on some level, with their local restaurants. It’s actually part of our orientation we share with every new member. We talk about it in our marketing and tourism committees — how important it is to have some relations with your local retailers and help them understand your business model and how you can both succeed.

Brothers is one of the best examples. Those guys make great beer; they’re award-winners and are collaborative. They really do understand in that town how to win hearts and minds and build friendships. We’re incredibly proud of what they’ve done.

VCB: What’s ahead in 2020 for the Virginia craft beer industry?

BV: The one thing I’ve learned with this industry is there’s going to be a new business model pop up every couple of years that challenges the status quo.

The trend seems to be (breweries) wanting to have additional malt beverages on tap in the tasting rooms.

There seems to be an interest in multiple alcohol products. We have members that are looking at manufacturing wine, seltzers and ciders to broaden their appeal to their customer base.

That certainly is a trend that will continue.

We definitely are going to see the growth in nano breweries. They are less than 3,000 barrels in production. We think that is the future for startups. We’ll almost see those exclusively.

We’re starting to see renewed interest in Bristol and Danville. We’re probably going to see more of our members reaching out to have small breweries, or nanos, in more rural jurisdictions where there really is not much craft beer.

The third trend we’re going to see is a pretty rapid expansion of independent distribution. They’re serving an important niche in the market for the very small, specialized brewers that are just looking for a handful of local retail relationships.