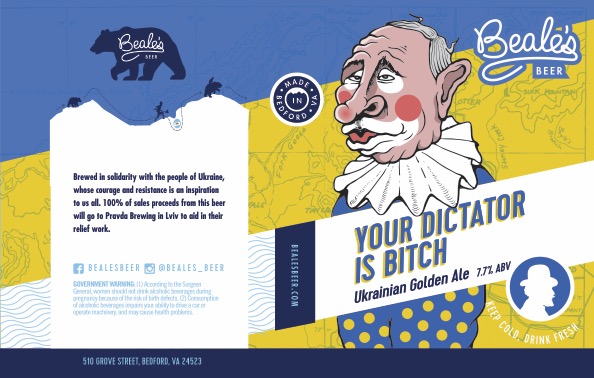 Craft breweries around the world have risen to the call to collaborate on a version of a Ukrainian beer to raise funds and awareness, and local beer makers joined the “special effort.”

Putin Huilo (translated as Putin Dick) is a strong beer (8% ABV) and is bottled in an equally, visually powerful label designed by graphic artist Andriy Yermolenko.

The label on the bottle provides this description: “Putin Hulio has become a worldwide nickname for the President of Russia. Unlike Hitler, and other world leaders, whose imperial ambitions lead to the deaths of innocent people, Hulio is not a fanatic — he’s a Russian billionaire, not a tzar. In early 2014, Russia annexed Crimea, and several other parts of Ukraine. This action violated world orders established after WWII, and set off the expansion of Russian Terrorism throughout Europe.”

Scott Bateman, owner of COVA Brewing Company and this year’s president of the Coastal Virginia Brewery Alliance, rallied the brew troops to get behind the cause related to humanitarian efforts in support of the Ukrainian people.

“Ulyana Wingard, owner of the Garage Brewery in Chesapeake, had been our main source of information and inspiration,” said Bateman. “When the call for assistance came to our attention, the CVBA member brewers didn’t hesitate and jumped into action. We quickly pulled our members together and formed several collaboration hubs that would get the beer brewed and flowing as quick as possible. We were made aware by Ulyana a few weeks ago that close to 500 breweries across the world had signed up to collaborate and contribute funds to the #Ukranian cause. Another way for our collective brewing community to make a statement of solidarity and support for the citizens of Ukraine. Ulyana’s story was very inspiring for us all and we appreciated her commitment to the cause.”

The recipe for Putin Hulio was developed by Pravda Brewery, which is located in Ulyana Wingard’s hometown on Lviv, Ukraine. When the Russian invasion began, Pravda stopped making beer so as to use its bottles for Molotov cocktails for ordinary citizens could resist Moscow’s brutal forces.

Breweries around the world are sharing recipes from our Ukraine craft brewing community and developing unique recipes and labels to #makebeernotwar.

In Norfolk, COVA Brewing hosted brewers from Deadline, Rip Rap, Maker’s, Smartmouth and Benchtop to make the Putin beer based on Pravda’s recipe. So, too, did The Vanguard collaborating with Big Ugly, Tradition, Oozlefinch, MoMac, and Nansemond Brewing Station.

All pints sold will have a $2 donation to fund the following set up by and explained by Pravda Brewery:

“Humanitarian relief: Together with Lviv City Council, we help women and children with disabilities in need to temporarily leave Ukraine to EU and receive first social aid. We work with Poland, Czech Republic, Portugal, Italy, Germany and Baltic states. We transfer women and children who don’t have enough money, orphans, children with mobility and palliative issues.

The Garage Brewery and Wasserhund Brewing Company joined forces for the beer.

Said Christine Holly of Wasserhund: “We brewed a Belgian Triple named Putin Huylo (8.1% ABV) as a strong ale, golden in color, with hints of cracked pepper and coriander. Pravda Brewing in Lviv, Ukraine has ceased the production of beer to produce Molotov cocktails to aid in the fight against Russia. Therefore, they have released their award-winning beer recipes in what is being called an “International Collaboration” to support he people of Ukraine. For this Tripel, we collaborated with The Garage Brewing whose owner is a Ukrainian immigrant. All profits of draft ales will go directly to the Red Cross of the Ukraine.”

Bold Mariner’s Kerrie Stacks flew to Paris as a Beer Ambassador, and participated in a collaboration with Julien Perrod, head brewer at La Parisienne.  Both the French and American brewed versions will raise money for UNICEF to benefit efforts in Ukraine.

“I spent three weeks in France during March and April,” said Kerrie Stacks. “I was in Paris for Planete Biere and also met with restaurants and distributors. Participation in the festival and the collaboration brew was organized by the Brewers Association’s export development program. Being fluent in French was a big plus as it allowed me to really make connections with accounts and french craft beer enthusiasts.”

Norfolk-Paris-Kyiv IPA was brewed with Mosaic and Citra hops and will come in at 5.5% ABV. The beer will be available on draft and cans wrapped with a Ukraine yellow and blue label.

O’Connor Brewing, in collaboration with Pravda, is doing a heavy beer as bold in strength as in name —  F*%K PUTIN Dry Hopped Strong Golden Ale.

New Realm Brewing Company brewed “Haze of Hope,” with proceeds going to support CARE USA. The non-profit is aiming to reach 4 million people with immediate emergency assistance, such as food, water, hygiene kits, psychological support, and cash assistance to aid families in Ukraine who are fleeing violence, and is prioritizing women and girls, families, and the elderly.

In addition to the Alliance brew, Big Ugly Brewing made Mercy Killer Barrel Aged Stout, which included the Ukraine flag on the label.

Legend Brewing Company of Richmond brewed Red Eyes, an amber ale, for Ukrainian relief efforts. The can label featured the Ukraine colors and a blue-faced, red-eyed person in a futuristic looking hazmat suit.

Alewerks Brewing Company released Teamwerks, a Ukrainian-style Golden Ale with $1 of every 4-pack or glass sold going to Mercy Chefs.

Virginia Beer Company, while in London on a trade mission, teamed up with craft beer bar The Rake for a massive tap takeover, and all proceeds from sales of VBC beer being donated to the UK’s Disasters Emergency Committee Ukraine Humanitarian Appeal.

Beale’s, based in Bedford, Virginia released Your Dictator is Bitch (Ukrainian Golden Ale 7.7% ABV) on May 28. Head brewer James Frazer shared this description: “Brewed in solidarity with the people of Ukraine, whose courage and resistance is an inspiration to us all. 100% of sales proceeds from this beer will go to Pravda Brewing in Lviv to aid their relief work.”

The Beale’s label paints Putin as a clown.