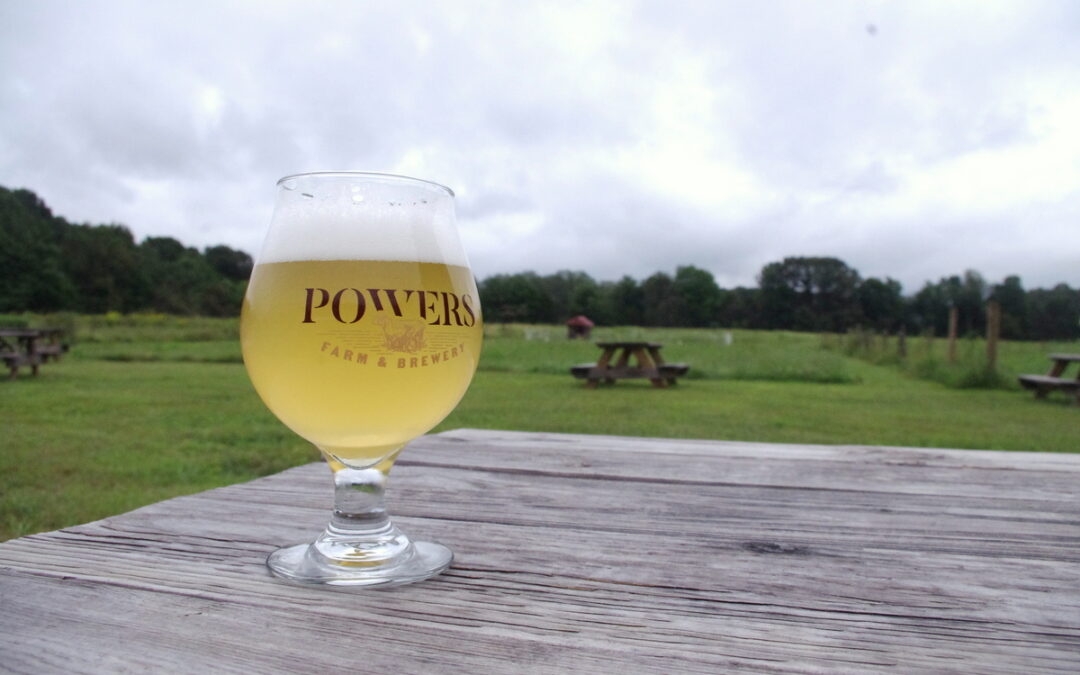 It’s been a long strange trip for the breweries of Northern Virginia since March. Between the changes in procedures, practices and personnel, the breweries have had to pivot multiple times amidst changing government health regulations.

Some breweries have leaned on their roots to help them make it through this difficult time. Community Supported Agriculture (CSA), continues to be a popular way for consumers to buy local, seasonal food directly from farm breweries throughout the state.

“We are passionate with agriculture for our CSA and our brewery customers,” says owner Kevin Powers, who, with his wife Melody, own the 2.5-acre Powers Farm & Brewery located in Midland, just outside Warrenton in Fauquier County. “Pre-Covid we integrated the farm and the brewery by doing things like growing elderberry flowers and using it for Kolsch.”

The Powers grow most of the hops they use, and raise bees, herbs, fruits and veggies for use in their 2.5-barrel brewhouse. “It’s more work but one nice thing is that the weather has been incredibly cool and sunny this spring and not a lot of rain, so the crops look good.” The Powers found an unexpected benefit going between the brewery and cars for curbside pickups, Kevin says. “Once we were stuck outdoors-only, we did crowlers and we have a covered porch. It’s a lot better for our health. I went from walking 100 yards per day to 8 miles.

Loudoun County is seeing some expansions and a few new breweries but with one exception: Dragon Hops closed its doors permanently in March after opening in June of 2018. The eclectic brewery, bar and restaurant had a mixed following that drew heavy metal fans, drag queens and defense/intelligence community types.

On another front, brewer and firefighter Rolando Rivera is getting strong reviews for his beer at House 6 Brewing Company in Ashburn. House 6, which opened to the public around the same time as Dragon Hops, features firefighter themes including a Pilsner named Hop, Drop, and Roll as well as the El Bombero Kolsch.

Notaviva Craft Fermentation owners Steven and Shannon Mackey not only had to shift to porch-side purchases for their bucolic, laidback facility but they also started using local caterer C’est Bon by Savoir Fare to help distribute their products in nearby Round Hill. The satellite spot for beer was due to a separate-than-Covid obstacle to their winery, cidery and brewery — the construction that started on Virginia Route 9 and has blocked traffic in both directions at nearby Hillsboro for months.

Just south of Hillsboro, Old 690 Brewing Company has managed to keep the beer flowing thanks to some basic ingenuity and marketing. “Home delivery was a very big success for us,” says Shannon Grey, Old 690’s manager. “It kept us on the radar as a local source for beer. We gained a lot of new customers.”

Old 690 offered various stickers and free merchandise to keep their followers happy. Frequent buyers increased their chances to win prizes while others received pint glasses. “Every time they got a delivery, they got a ticket,” says Grey. “We gave out an Easter Basket for an egg hunt with the kids that had some toys. It was really fun.” The deliveries became so successful that Grey started getting calls from some of the competition. “We had larger breweries who were calling us asking how we did it.”

The popular brewery, which celebrates its six-year anniversary August 14-16, has been strictly following state guidelines (at one point going with reservations only) for visitors, adding extra staff for cleaning tables and relying on single-use plastic utensils and cups. Grey says it is just a sign of the times. “We modified hours for the convenience of beer lovers and are following regulations. We’re following all the guidelines. We did some modifications and we have a new brew system. We’re working on more natural carbonation system.” There’s a very special new beer just released, Harley chocolate oatmeal stout, that is named for a dog that disappeared at the brewery yet surprisingly was found two weeks later.

Several new beer spots are on the horizon in Loudoun County while others are expanding or already open. The mammoth Flying Ace Farm in Lovettsville is opening at the end of summer with a brewery, a distillery, a Monk’s famous barbecue restaurant and a bridal estate for large weddings or corporate events. One of the buildings has a large replica of an airplane hanging from the rafters.

This spring the always popular Loudoun Brewing Company in Leesburg finished its brand new brewhouse and got its beer even more dialed-in. In addition to the larger new brew system, owner Phil Fust says he expanded his sprawling patio called “The Sunny Side,” a grassy area which is bigger and more comfortable for people to listen to live music. “We are doing well,” says Fust. “We are brewing at least one new beer every week,  like before, and now we will be canning seltzer with fun flavors like margarita, mojito and mimosa.

Just up the street, Dynasty Brewing of Ashburn has emerged with a second location in Leesburg. Dynasty has set up in Leesburg across from the Loudoun County parking garage in the former home to Bike TrAle Brewing. The genesis of the name is the Virginia Dynasty of four of the first five U.S. presidents who were natives of Virginia. Dynasty’s operations partner Favio Garcia is something of a legend in NOVA beer circles, going back to his work with Old Dominion, Lost Rhino and Beltway breweries, among others.

About a hundred feet away from Dynasty is the most anticipated spot for food and beer this summer in Loudoun County. Buford’s Biscuits in Leesburg is a restaurant specializing in Southern cuisine but definitely will offer a very interesting assortment of beers in the former home of Senor Ramon’s