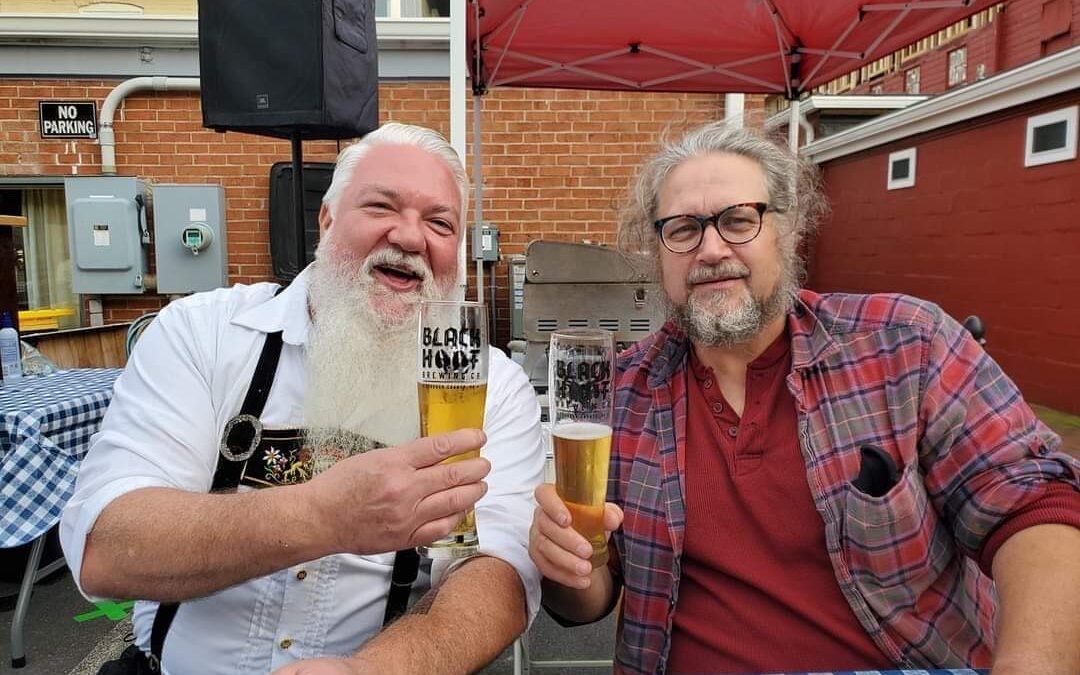 by Jefferson Evans and Chuck Triplett

Early May found the Northern Virginia brewing community suffering a very unexpected and hard to process loss when Dean Lake died. Dean was a true elder statesman among Virginia brewers, talented at his craft, known for his gregarious nature and sharp wit, a good friend to many.

Bill Madden, another veteran of the NoVa brewing community, noted, “Dean will always be an alumnus of the prestigious brewing team of Old Dominion Brewing Company, known for the many bright minds and characters that passed through that well-worked 25-bbl JVNW brewhouse based in Ashburn, Virginia.”

Madden went on to say, “I first met Dean at the inaugural meeting of the Rubber Boots Society on May 19, 1996, which was held at Old Dominion. Dean became the Editor, wrote the quarterly newsletter, which was a thankless job. I got to know him over the years and watched as he moved between Old Dominion, Sweetwater, Thoroughbreds, Dog Money, and Black Hoof. Dean was well-liked by all in the industry and became a brewer’s brewer, respected by his peers and always ready for a good discussion on his view of proper brew house procedure. I will miss his gregarious disposition, always ready for a good laugh. I will miss being able to share in brewers conversations that, unless you are in the industry, sound like a foreign language. He truly will be sorely missed by many. Rest easy, my friend.”

Favio Garcia — cofounder of Lost Rhino Brewing Company, brewer at Beltway Brewing Company, and now co-owner of Dynasty Brewing Company in Ashburn and Leesburg — is another alumnus of the Old Dominion brewing team and remembers Dean over the years.  “I can’t remember exactly when I first met Dean. It must have been when I was a young brewer sent out to the Old Dominion Brewery to pick up yeast and clean some kegs or some other task. Maybe we hung out together late at night after one of the now infamous Old Dominion beer festivals. I was fortunate to eventually get a job at Old Dominion and for a short time we were co-workers before he left to start a brewery in Leesburg. At that time I really didn’t appreciate Dean’s sense of humor and I was left saying many times “yeah, okay” as I tried to catch up to his quick wit and figure things out. But, eventually, I did figure it out and I followed his path.

Dean left a brewery where he loved to brew lagers and helped start a brewery with a friend.  As would I. He brewed at Sweet Water Tavern for a while and I landed at Sweetwater just as he was leaving to go back to Leesburg. Once again, I was just a few years behind him, but one thing is for sure, when I needed a friend he was there. When Matthew Hagerman and I were trying to start a brewery of our own, Dean invited us to brew a batch of pilsner at his brewery, which we served at the NoVa Brew Fest to show that we were serious. We could not have done that without Dean. When my time ended at that brewery, Dean invited me over for a beer. Not to listen but to poke fun at me and make me laugh. Because of our shared experiences, our sense of humor was more aligned at that point. I appreciated that beer that Dean offered and what came with it —  support and friendship. Not too long ago we were sitting at my location in Leesburg and Dean just kinda pronounced: “Favio and I are friends, but we never see each other.” Once again, he was right and made me laugh. Too busy running our breweries and busy with our families. I was looking forward spending more time Dean.”

On May 5, the winners of the 2022 World Beer Cup were announced. Among the results were those for German-Style Doppelbock and receiving the Bronze Medal was Leesburg’s Black Hoof Brewing Company for the Dominator Doppelbock, brewed by Dean Lake. Dean, an appreciator of German lagers, had found a home at a brewery focused on German lagers. A collaboration that should have lasted longer, but it is the lost time with friends and love ones that truly stings. We were all looking forward to more time with Dean.