Did The Beer Jesus From America Sell His Soul? 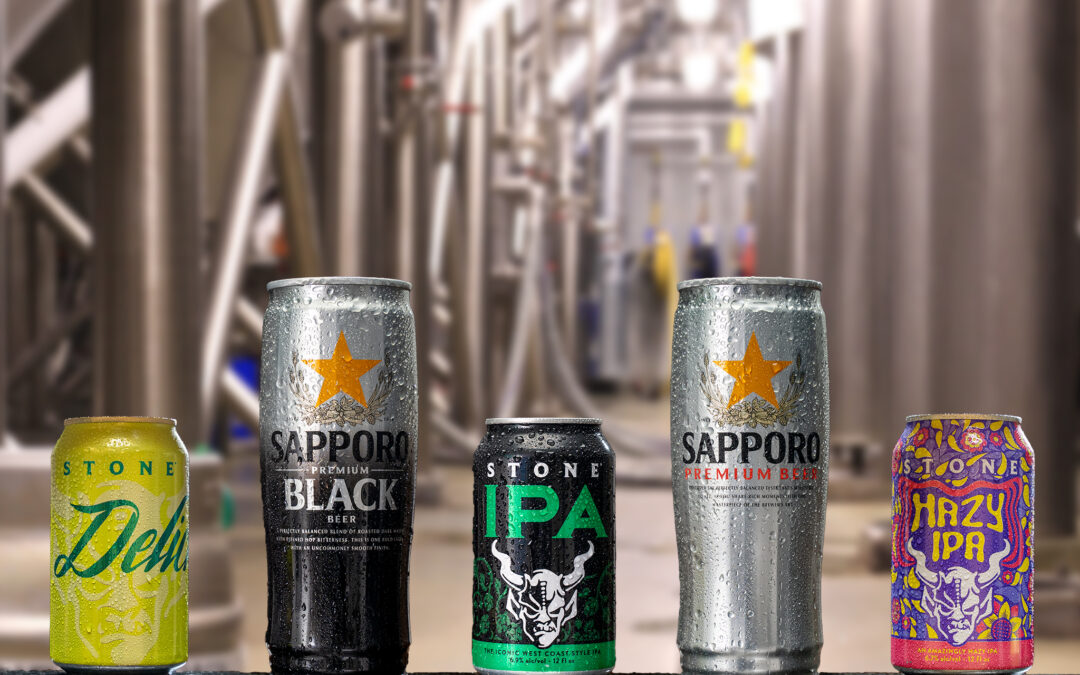 (ALL IN THE FAMILY: Stone Brewing favorites become part of the Sapporo portfolio of beers in August.)

The acquisition is scheduled to close by late August in a deal valued at $165 million and involves Stone’s operations in both California and its east coast production facility in Richmond.

The news came as a shock to many as Stone Brewing co-founder and executive chairman Greg Koch spent his career crusading for independent craft brewers and preaching against the evils of Big Beer.

“That was their entire schtick,” said one Virginia brewer who wished to remain anonymous.  “Their marketing slogan was ‘yellow fizzy beer is for wussies,’ and Stone positioned themselves as the protector of small craft brewers taking on the corporate beer establishment that treats beer as a commodity.  I think this has to destroy their credibility with their loyal craft fans.”

That remains to be seen thus far, however.

Unlike the immediate and harsh response Virginia-born Devils Backbone Brewing Company received by craft beer enthusiasts and fellow brewers from across the Commonwealth after its announced sale to beer giant Anheuser-Busch-Inbev in 2016, the chatter on social media has been ho-hum for the most part regarding Stone.

“Certainly, we can view this as a loss of an innovative and independent craft brewery, which it is,” said Diane Catanzaro, a contributing writer for Virginia Craft Beer Magazine and a certified beer judge. “But it’s also sort of like the American dream; they started a small brewery, grew it, and now they will be probably be super rich.”

In March of 2022, Reuters news service reported a Federal jury awarded Stone Brewing $56 million in its trademark infringement case against Molson Coors. In its reporting, Reuters journalist Blake Brittain quoted Molson Coors spokesman Marty Maloney saying, “What we learned through this trial is that Stone Brewing’s lawsuit was not driven by consumer confusion and that Stone Brewing has a $464 million debt to pay to their private equity investors in 2023.” While Molson Coors is considering this as possible grounds for an appeal, a somewhat auxiliary question arises: How did Stone Brewing get $464 million in the hole to investment group VMG/Hillhouse and was this the deciding factor in co-founders Koch and Steve Wagner selling to Sapporo?

“That information was taken out of context during the Keystone trail,” said Sean Monahan, Stone Brewing Chief Operating Officer. “VMG has been an excellent partner to Stone, investing in our growth since 2016.”

The year 2016 is interesting. In his farewell or explanatory post on the company website titled “It’s Time,” Greg Koch referenced that year.

“…But I wanted to stand up for craft beer, which was the perennial underdog of the beer industry. Until it wasn’t.

“When was that moment? That’s a harder call than [pick your metaphor], but it seems to be sometime around 2016.”

2016 was the year Stone Brewing opened its Richmond facility to better serve the craft market east of the Mississippi with a fresher, highly sought after portfolio of beers like Stone IPA and Arrogant Bastard.

The city of Richmond used $25 million in grants and bonds to fund Stone RVA, according to Richmondbizsense.

Stone Brewing was founded in 1996 and grew to be the 9th largest independent craft brewery in America.

Sapporo has been seeking greater marketshare in the United States and Canada. In 2017, it acquired San Francisco’s Anchor Brewing Company for $85 million.

“Sapporo shares our values and appreciates our unique, time-honored approach to brewing,” wrote Keith Greggor, Anchor Brewing co-owner, in a 2017 letter to supporters. “With both a long-term vision and the resources to realize it, Sapporo will keep brewing Anchor’s beers in San Francisco while expanding to new markets worldwide.”

And now this includes Richmond.

Stone’s Sean Monahan remains optimistic about the commitment Sapporo brings to the table and insists the brewery’s financial challenges had nothing to do with the sale.

“Sapporo is acquiring Stone for many reasons unrelated to VMG’s investment in Stone,” Monahan said. “This is the right decision for the long term of both Stone and Sapporo.

“As Greg Koch mentioned in his blog post, had we not found the right partner, we wouldn’t have sold,” Monahan continued. “We feel really fortunate to have a partner that respects Stone – our beers, our people and our fans. We’re not changing.

“And for the VA audience, a nice complement to this story of growth is the news that we’re in the process of installing our pilot brewing system. This 10-bbl system creates a whole new channel for our local brewers to express their creativity and offer one-off beer styles right there out of our Richmond facility. So, not only are we investing capital into our RVA brewery, expanding and hiring more people, we’re also going to be offering some really exclusive, small-batch Stone offerings with more regularity right there in our Tap Room.”

Stone’s Richmond brewery will be producing Sapporo’s lineup of beers by the end of next year. Visitors to the Stone tasting room are likely to also find beers from across the Sapporo family (i.e., Sapporo, Anchor, Unibroue) in the “Friends of Stone” offerings.

It appears Stone may lose its coveted independent label.