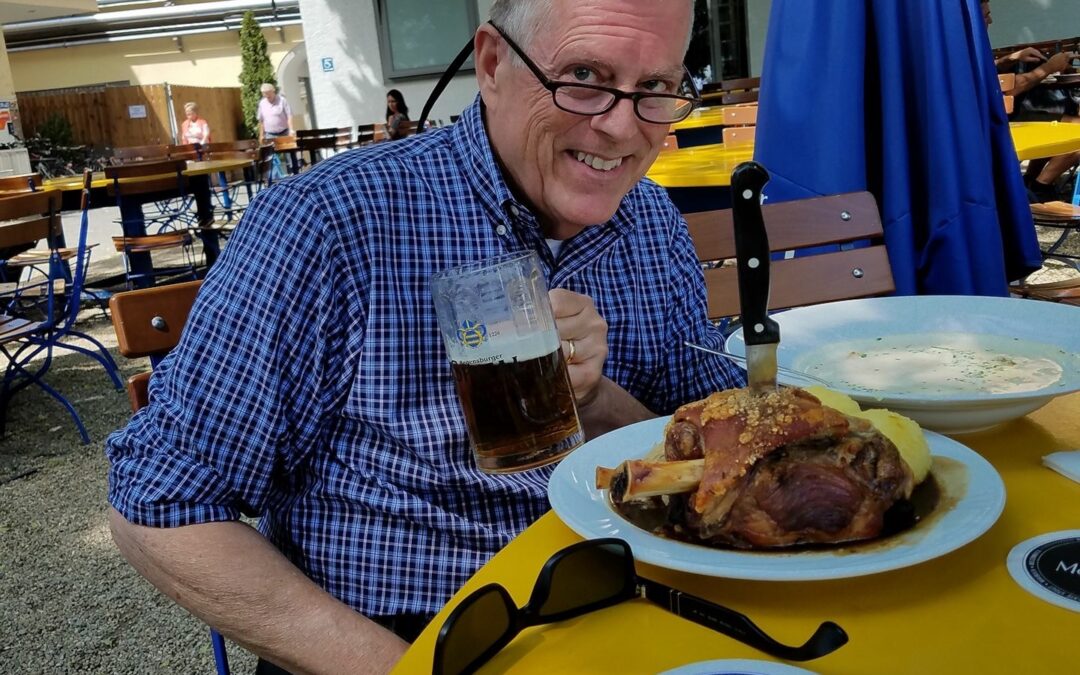 Triplett has made numerous beer pilgrimages to the Olde Country and often makes it his business to sample the latest attempts by American brewers — especially in Virginia —  to replicate the originators.

Given the season, we thought it’d be a fun topic to discuss with Chuck. Here’s our conversation.

When did you first experience beers brewed in Germany?

I started seeking out German beers in the mid-1970s because of the dearth of good American beers at that point. German beers at least had flavor. I made my first beer trip to Germany in 1990.

What brands and styles were some of those German-made beers that you enjoyed most here in America during those dark ages?

In the 1970s, both Lowenbrau Light and Dark were available as well as Wurzburger and a couple of others. This was before Miller obtained the rights to brew Lowenbrau in the USA.

Can you share with our readers some of your favorite towns and breweries in Germany for drinking beer?

My favorite region would be Bavaria and the state of Franconia. My favorite town is Bamberg.

I would give Cologne and Dusseldorf in the north honorable mentions.

Bamberg had 10 breweries mostly within easy walking distance and several bierkellers as well. It is home to the famous Weyermann Malt company too. The most famous Bamberg beer brand is of course Schlenkerla and it’s rauchbiers (smoked beers) but Spezial, Fassla, Mars, Keesman, Greiflenkau, Kloster and Kaiserdom are all there and making fine beers. Several of these breweries also offer rooms to stay.

Within a 5-mile radius of Bamberg there are  close to 30 more breweries and in  the Franconia region in general has around 300. There are also plenty of biergartens and kellers to visit and enjoy. It is really a beer drinkers paradise and I never tire of visiting. The Kellerwald which is near Forscheim has over 20 brewery kellers carved into the in the forested, granite mountain with tasting rooms and beirgartens there to sample the beers lager on site.

How is the experience of drinking beer in Germany similar and different than in America?

Most German breweries have a tavern or pub where you can enjoy their biers. Similar to American taprooms however they are usually comfortable and cozy places. Different from American industrial settings. Germany of course has its massive bierhalls which are great fun.

German beers of all styles seem to maintain a better head (carbonation) than American-brewed beers. Is that appealing to your tastes and why?

You won’t be served a beer without a frothy head. Much different from real ale in the UK where the beer must be up to the fill line. There is plenty of science as to why the beer’s head improves the drinking experience by exposing its essence to all of the senses.

What are some of the Virginia-brewed German-style craft beers that are on par with those in Germany?

There are several outstanding and  GABF medal winning Oktoberfest brews from Virginia. To name a few: Port City, Lost Rhino and Bear Chase. There are, of course, other great Virginia examples. We are fortunate to have some very good to excellent lager brewers throughout the state. I have had some dynamite brews from Bingo, Ardent, Vibrissa, Wheatland Spring and others.

What makes a Marzen beer most appealing to you?

I am a malt guy. I like the balance between the sweet malt and slightly bitter hops in the German styles. The clean, crisp, biscuitty melanoidins just do it for me. After nearly 50 years of drinking beer I was over the excessive use of hops about a decade ago.

Which American wheat beers brewed in Virginia equal those in Germany?

I am not really a fan of wheat beers, but there is some confusion when discussing Oktoberfest styles because the actual current style served at Oktoberfest in Germany is termed Wiesn or Wiesen, which means “field” beer. It is lighter in color than the traditional marzen which is what most Americans think of as fest beer.  I love both styles.  Not so much the similarly named German wheat styles though.

Any additional thoughts on German-style beers brewed in Virginia and across the USA?

I think the thing that seems to set German beers above most American renditions of their styles is decoction brewing.

It is standard in Germany, but most American breweries don’t do it. I think it make the difference. It is finesse. There are some excellent  lager focused brewers in this country and some of them do decoct. A few of the best from outside of Virginia are Von Trapp in Vermont, Jacks Abby in Massachusetts, Bierstadt in Colorado, Schilling in New Hampshire and Notch in Massachusetts.

I am so happy to see the growth of lager styles among American breweries these days. Many brewers are attempting them and I see them more often when visiting tap rooms. I also have noticed that they are seemingly getting better and better though they are are harder and take more time to make. I hope the trend continues.