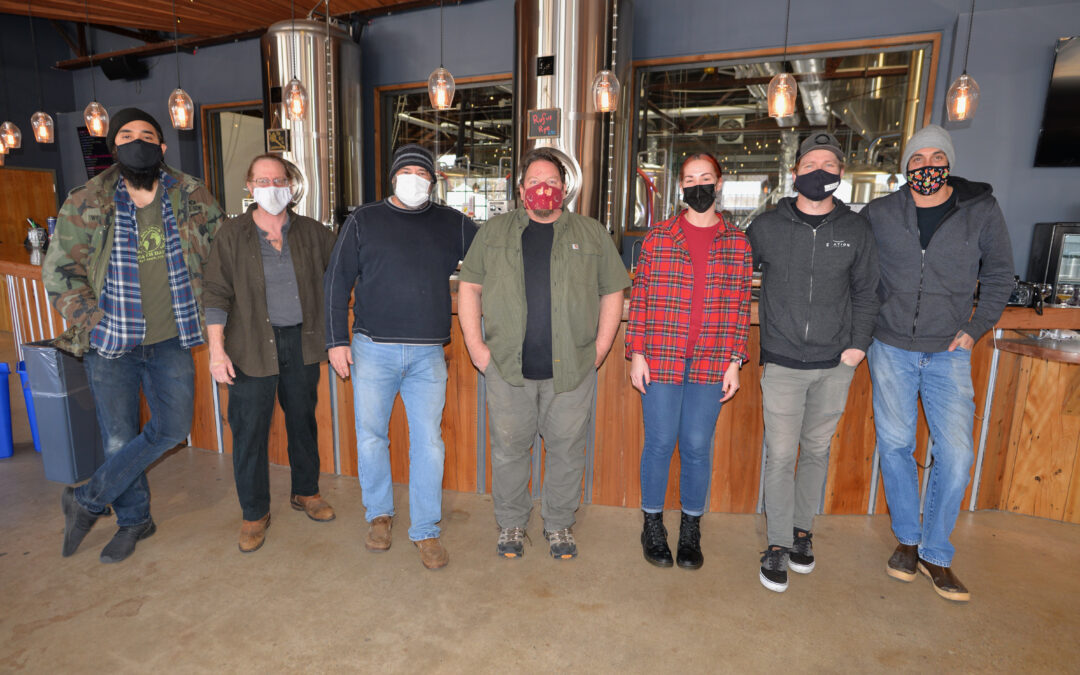 Anyone driving on North Colley Avenue at night can’t help but notice Elation Brewing Company with its blue and deep purple glow of theatrical lighting illuminating and reflecting off the large, stainless steel fermenting tanks behind the curved bar.

John McCormick, owner of The Bakehouse at Chelsea, had a similar reaction on his first encounter.

“On my first time visiting Elation I was really overwhelmed by the space,” said McCormick. “I had driven by it before and I came at night. It is just such a beautiful space to walk into. It’s so inviting, warm and comfortable.”

McCormick noticed the large fermenting tanks. They reminded him of something he was very familiar with — a wood fire pizza oven.

McCormick was enjoying a beer and struck up a conversation with Kenny VanHook, the brewery owner.

“We hit it off and then I just said, ‘Hey, would you consider imagining a pizza oven in the corner with The Bakehouse making pizzas,’” McCormick recalled. “It was sort of a half-joking statement. Kenny circled back a couple weeks later and we started moving forward with a plan.”

Award-winning Elation Brewing Company first opened to the public on February 27, 2019. Like all independent craft breweries, Elation produces a core group of beers such as Larchmont Lager, Schwaz, Notice This (West Coast IPA), and Rose Gose (a tart gose) as well as a rotating list of seasonal and one-off, limited release products.

Elation also offers its customers cider, mead and wine on draft as well as a small menu of food items prepared in its in-house kitchen.

Where the current kitchen is hidden from view in the back of the brewery, the soon to operate The Bakehouse at Elation will be entertainingly visible. Behind a curved wood serving station (a design consistent with the brewery’s bar), a staff member of the bakery will make from scratch pizzas by order and cook each in an attractive oven for all to see.

“All of the dough, toppings, everything will be made at Elation,” said McCormick.

The Bakehouse will enhance both the quality and variety of food directly offered to Elation patrons.

The Bakehouse at Chelsea opened in May 2014. You could call it a “craft” bakery in that the chefs and bakers use fresh, high quality, and organic ingredients for an assortment of pastries and breads. Wood fire pizzas — specifically Neapolitan style — are also a specialty using naturally leavened dough and shaped by hand.

When the pizzas are ready to roll so too will a new beer made for the occasion.

Head brewer Bob Sweeney has a beer fermenting for the official grand opening of The Bakehouse at Elation.

“The beer’s called Bakehouse Bohemian Pilsner,” shared Sweeney. “The idea behind it was to be something to be enjoyed with pizza.”

The beer will be lagering for a total of six weeks. The key ingredients are Bohemian pilsner malts and Saaz hops to make this a true traditional pils. Talk about authenticity:  Saaz hops, named after the Czech city of Zatec (Saaz in German), make up more than 66 percent of the hop crop in Czech Republic and are used extensively in Czech/Bohemian pilsners.

“It’ll be pretty true to style, refreshing and light,” said Sweeney. “Easy to wash-down pizza with.”

The Bakehouse at Elation is projected to open around St Patrick’s Day. In addition to the Bakehouse Bohemian Pilsner, the brewery’s upcoming beer releases will feature a 9.5% ABV Baltic Porter at the end of March as well as canned versions of its popular draft brews.

According to McCormick, if The Bakehouse at Elation is successful he will look to partner with other breweries in the 757 region for similar opportunities to expand his brand.