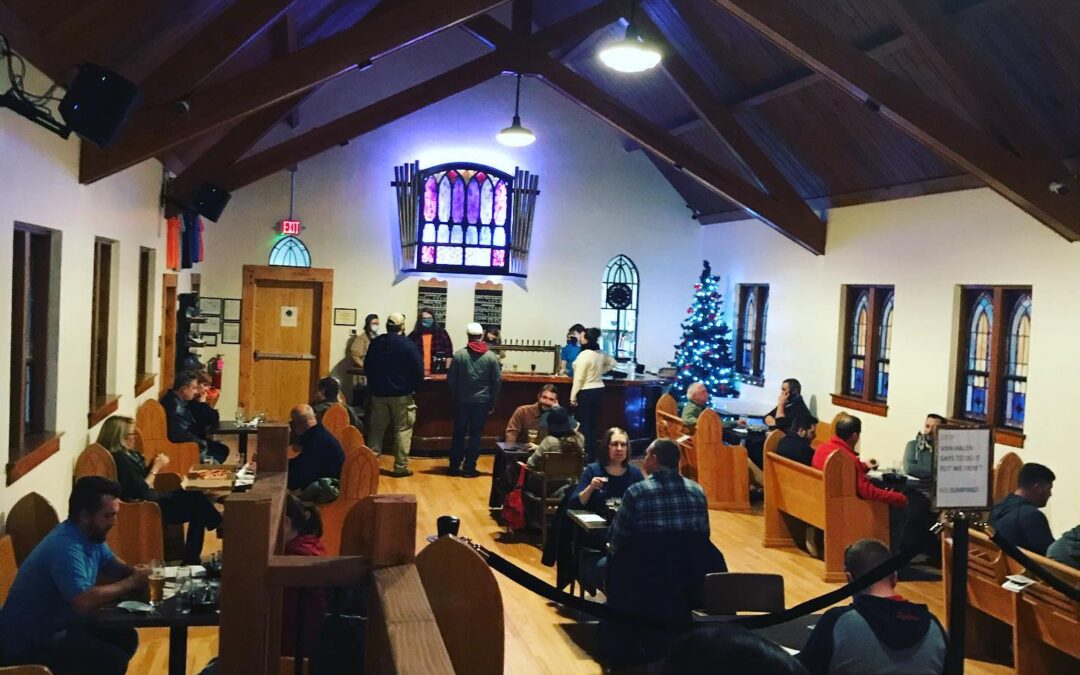 (A former church sanctuary serves as the tasting room at Long Way Brewing. Photo courtesy of the brewery.)

Anyone hoping for a second craft brewery to open in the tiny college town of Radford literally had their prayers answered late last year when Long Way Brewing opened in a former church.

After considering several properties in an effort to revitalize the west end of the city, business partners Janet and Rob Gropman, Keith Weltens and Jeff Kleppin came across an abandoned stone building that last operated as the Seventh Day Adventist Church.

According to Kleppin, a place of worship wasn’t exactly what they had in mind to convert into a brewery. But as some believe, “the Lord works in mysterious ways.”

Though the exterior looks more than 100 years old, it was actually constructed in the 1950s to look rustic and appropriate for a Southwestern Virginia river town.

Inside, however, for those who give thanks to the Almighty Above for great beer a wonder to behold awaits.

The tasting room maintains the original stained glass windows with one additional colored glass window to allow for more light. Wooden church pews were shortened and converted into booth seating. Where the alter was once positioned at the head of the church patrons line up to order a beer at the taproom bar.

“Preserving the feel of the room was certainly a priority for us,” said Kleppin. “It makes us just one of 20 or so breweries in the country that are in former churches. We’re happy to be in that small company.”

When it came to naming the brewery the ownership team thought long and hard about a long list they had brainstormed on. Rather than a Biblical name, they selected a different slice of local history in calling it Long Way Brewing.

For those classic rockers out there it isn’t related to the Supertramp tune “Take the Long Way Home.” The brewery is named in for long-ago resident Mary Draper Ingles who, in 1755, was taken prisoner by the Shawnee tribe to what is modern day Ohio. It is said she escaped and took “the long way” home — some 600 miles — by following the New River back to her family homestead. A statue in her honor stands in a park near the river.

Mary Ingles might be proud not only for being membered through the brewery name but also because a woman — Kim Pensinger — was named head brewer.

As it turns out, the brewery ownership didn’t have to look far for a skilled beer maker. Kim Pensinger lives a few houses away from the brewery with her husband Mike Pensinger, the award-winning head brewer at Parkway Brewing Company in Salem.

“We didn’t have a brewer in mind when we started the whole thing,” said Kleppin. “The more we talked with Kim and she really wanted to get into it; she lives with a brewer; she’s been homebrewing. She makes sense for us. She’s got a knack and we are really pleased so far.”

While the draft list will rotate like the hands around a clock, some of the early favorites with local customers who stream-in from the surrounding neighborhood are Steppin’ Up Blonde Ale, Forecast: Overcast Hazy IPA, Ingles Trail Pale Ale, Mary Mary Why You Buggin’ (an English Brown ale named for Mary Ingles), Whole Latte Love (coffee stout), Gose Together Cranberry Orange, and Cluster Luck IPA.

Jeff Kleppin said Pensinger has free rein to be creative with the beer she brews, and that’ll be put to the test sometime in February when she plans to make a Koyt.

Koyt was a popular beer style in Medieval Holland from the years 1400 to 1550. It is said to be a true bready brew derived from 45 percent or more oat malt with a minimum of 20 wheat malt and the remainder coming from pale malt.

Jopen Brewery in Haarlem, The Netherlands, is ironically located in a former — and much larger — church. Jopen brewed and bottled a historical Koyt with Gruit (a herb mixture pre-dating the use of hops for bitterness) that came from a recipe dating back to 1407.  It’ll be interesting to see how Kim Pensinger’s version turns out.

Speaking of bread, the two-level church building allowed the owners to do something special. Where the brewhouse and tasting room occupy the second floor, the ground level houses a non-profit called the Radford Fairlawn Daily Bread. The organization had been looking for an upgrade in its mission to provide free meals to those in need. Keith Weltens, who helped as a volunteer from time to time, got the blessings from his partners to offer them the first floor.

“If we could have an opportunity to give back to the community then we wanted to do that,” Kleppin said.

As the verse John 6:35 states, quoting Jesus, “I am the bread of life; whoever comes to me shall not hunger, and whoever believes in me shall never thirst.”

Sounds like Long Way Brewing is the place to be.