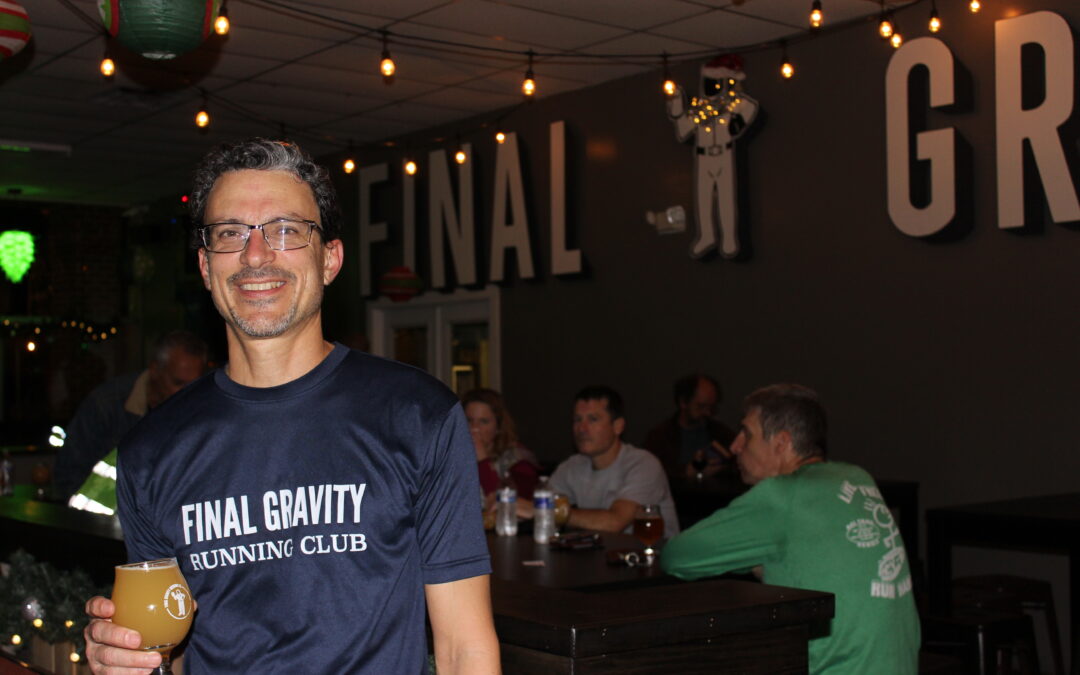 Expectations were high when Tony Ammendolia announced that he would be adding a nano-brewery to Original Gravity, the home brewing and wine making store which he opened in 2011.

“Tony was actively, systematically dialing in a perfect IPA when he was home brewing,” recalls Ana Shore, past president of the James River Home Brewers in Richmond. “We knew if he opened a brewery it would be a success just based on quality of beer.”

In 2015, the business added a 2-barrel brew system and received the necessary federal and state licenses. Naturally, he named the brewery Final Gravity.

“Being a home-brew shop, we thought it would be cool to use all equipment that is available to home brewers,” Ammendolia told me soon before the brewery opened. He’s since enlarged the tasting room and added 5-barrel tanks, while keeping distribution limited to occasional special events.

The Final Gravity tasting room reflects a casual appeal, while its double-door connection with the shop reflects the home-brew roots and expertise.

“I wanted it to be down to earth and welcoming,” Ammendolia reflects. The space includes a dart board, board games, tabletop shuffleboard and pinball. He also emphasizes having knowledgeable staff, several of whom have also worked in the homebrew shop.

Yet the proximity to the beer-geek world of home brewing doesn’t contribute stuffiness to Final Gravity. On the contrary.

“I believe there are no stupid questions,” Ammendolia affirms. “I don’t want customers to feel intimidated. Even in the shop, people will sometimes apologize, ‘I don’t know anything about brewing.’ ‘That’s OK, you’ve come to the right place.’”

As a neighborhood brewery in Richmond’s Northside, Final Gravity attracts plenty of regulars who walk there or ride bikes. Plenty of these same neighbors initially came to the tasting room accustomed to mainstream beers.

“We start them off with maybe a blonde ale, then move them up if they’re ready. We also believe in letting you try beers. We have little one-ounce tasters as well as half pours.”

In the same spirit, Ammendolia aims to “always have something for everybody”: a Belgian-style, a lighter beer, a middle-of-the road like an amber or brown, and a darker style. Typical beers on tap at the tasting room include Saison DeMeyer, Lakeside lager, Stepping Stone blonde ale, Fire Station 5 amber ale and Irish Goodbye export stout. You can also expect a couple of sours, such as variations on the Berliner weisse or gose.

All of this in addition to the style that Ammendolia is best known for, has won awards for, which draws visitors from all around Richmond and beyond: IPAs, especially the New England-style – juicy, luscious, laced with lupulin essence, with a rich, full mouthfeel. “It’s a style that’s here to stay,” he says. “The name is unfortunate, because they’re hoppy but they’re not bitter, so they’re not really IPAs.”

The beers labeled IPA at Final Gravity are a mix, showcasing American and West Coast as well as New England, from session to imperial.

When I ask him about trendy beers, he replies, “If it’s a beer, I’m willing to try it.” He tried a brüt IPA when that was trending. “That went well,” he recalls, “but there are so many other things to make … I became a craft beer drinker and appreciator in my early 20s (in the 1990s) because I liked beer.” Which means that trendy styles like pastry stouts and hard seltzer are not his thing. He may home brew a hard seltzer, he tells me, for his own experience and for his knowledge as a homebrew store owner, but he has no plans to brew one for Final Gravity.

However, he adds with a smile, he makes exceptions for holidays – like this year’s Halloween chocolate coconut stout that tasted like a Mounds bar and the Berliner weisse made with Jolly Ranchers, or a green beer for St. Patrick’s Day.

Meanwhile, at Original Gravity, business is steady, but he adds, “It’s leveled off. I thought five years ago that the popularity of craft beer would encourage more people to brew, but it’s had the opposite effect [industry wide]. There’s no need to brew now, when you have easy access to so many styles.”

Even right next door.

Conveniently located off I-95 and I-64, so an easy stop-off for those passing through