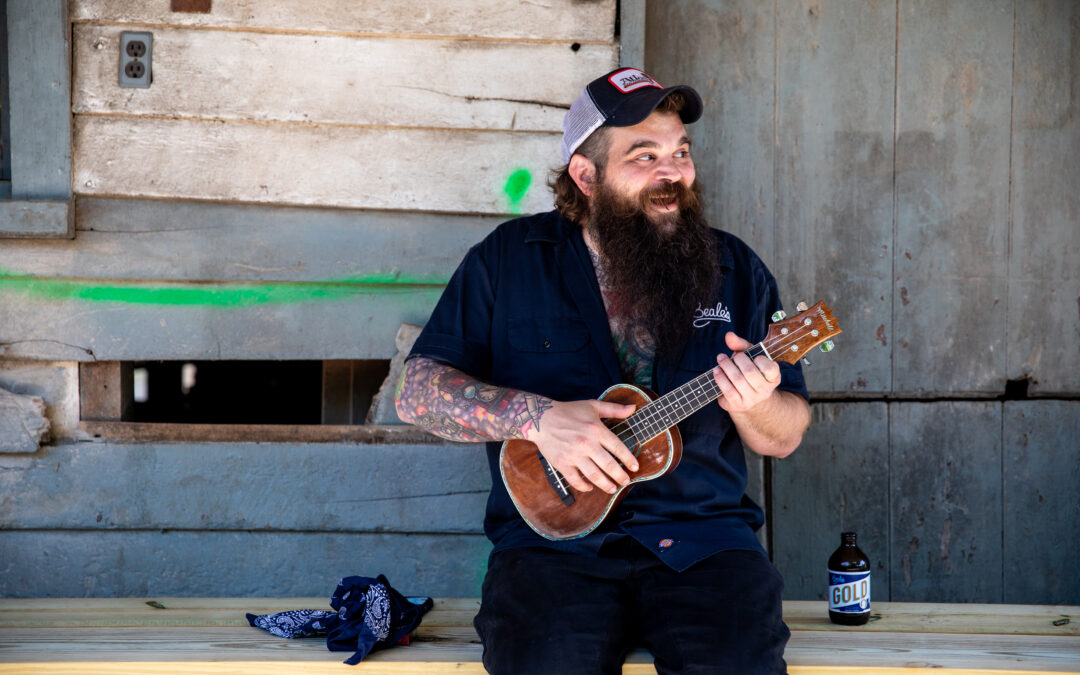 I’d like to crown another James — James Frazer — as potentially the hardest working man in the beer business.

Like the Godfather of Soul, Frazier is a musician at heart having fronted That Band with the Fat Kids in his hometown of Bedford, Virginia. After the band split, Frazer put his creative energy into a new project — homebrewing — and at warp speed accelerated his fluid knowledge, winning 26 competitions in 15 months. This led to an opportunity to compete in the Great American Beer Festival Pro-Am, and although his Black IPA didn’t win, an ever better prize came calling.

Dave McCormack, a historic property developer whose go-to brew at the time was Allagash White, heard the buzz of Frazer’s brewing prowess and requested a sample of his work. Frazer sent a white ale, and the rest was history in the making.

In the summer of 2016, with James Frazer at the helm, Trapezium Brewing Company opened for business in Petersburg’s historic downtown district in a former bricked ice house. Frazer had never brewed commercially, so McCormack was essentially rolling the dice thinking James’ recipes were a good bet. He was right.

“At Trapezium, we wanted to make quirky, approachable familiar beers,” explained Frazer. “We wanted to push some boundaries but still make it taste like beer. We wanted to add different nuances and touches to beer to make it stand out and develop new processes.”

Awards, in fact, have been common for the brewery including a silver medal for its Chasing Ponies in the Wheat Beer category at the 2020 VCBC.

McCormack and Frazer have made ambitious plans from day-one.

A year after opening Trapezium to great fanfare, they unveiled Beale’s in quaint Bedford, Virginia featuring straightforward beers such as Beale’s Gold and Red IPA. Beale’s scored a bronze in the 2020 Great American Beer Festival virtual competition for its Plumpricot in the Specialty Berliner-style Weisse category.

“I have several beers I was experimenting with that didn’t really fit the Trapezium brand,” said Frazer. “With that in mind, we had an opportunity to open another brand rather than opening up another Trapezium.”

The beers of Beale’s are reflective of the traditional tastes of local residents and offers them a familiar yet fresher alternative to mass-production lagers as a gateway to craft beer.

In addition to Beale’s and Trapezium, Frazer and McCormack have had several other brands variations fermenting, and those will be launched in 2021 with physical locations in York County, the Church Hill neighborhood in Richmond, and in Amherst, Virginia.

York County’s Department of Economic Development approached McCormack about the location on Route 17. It will mark the developer’s first ground-up brewery.

“They wanted us to bring something of what we do to York,” said Frazer. “Initially, they wanted Trapezium, but we felt like the Beale’s brand was a better fit for York.”

The York facility will resemble that of Beale’s in Bedford.

“We’re going to take a lot of the art like the map on the wall and replicate that with the architecture,” Frazer shared.”

The brewhouse will operate on a seven-barrel system with 15-barrel fermenters and lagering tanks.

Though this is a second location for Beale’s, Frazer insists it will be unique.

“Next year (2021) we are opening three breweries so I don’t want it to look like a franchise at all,” he said. “I want each brewery to have its own identity; it’s own speciality. It’s very important to me because we’re very creative people, and having different brands gives us the opportunity to explore beer more and grow our brand.”

The true niche of Beale’s in York — thus far projected to open in July 2021 as Beale’s East, though the name may change — will be what Frazer describes as “new age lagers.”

“With all the experimentation we’ve done we’ve learned a bunch of tricks,” he said. “Lager is a style of beer that really hasn’t been explored much in the past 200-300 years. We’re going to be exploring different types of lagering styles.”

In Amherst, Virginia, Camp Trapezium will focus on Belgian-style beers including Flemish reds as well as a farm-to-glass approach using only local ingredients and a spontaneous cool ship.

“That’ll be a 100% oak fermentation facility,” shared Frazer. “That should open in the spring.”

From Amherst to Richmond, Frazer will shift gears to operating a Belgian-style blending house in the Church Hill section of the capital city tentatively called 93 by Trapezium. The building is a former Masonic Lodge (520 N. 25th St) purchased by McCormack’s Waukeshaw Development company for $950,000 with an expected $500,000 in addition spent on build-out.

“I’m building a tanker truck to transport finished beer but not carbonated beer to Church Hill from Trapezium,”  Frazer said of the process. “From there we’ll pump it out, fill our barrels with lagers, stout, and porter and even inoculate to get some mixed culture going on.”

Once the beers inoculate, the liquids will be blended similarly as the are done in Belgium.

Frazier plans to bring back some ancient beer styles based on his extensive research, a sort of Jurassic Park laboratory of beer.

“It’s kind of taking what we do at Trapezium and kind of deconstructing it and elevating it at the same time,” Frazer, “while paying homage to tradition in Belgium and them Americanizing it with different styles. Richmond has a very talented brew scene right now and we want to compliment it with something different.”

As for the look of 93: “It’s like where would Black Sabbath go after a gig in 1972? I want it to be like that type of vibe. The darker side of Trapezium.”