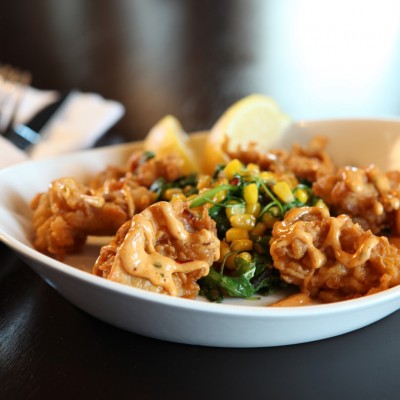 Living in Norfolk, I often formulate an evacuation plan each summer as hurricane season begins. We residents on the coast are mindful of the destructive power of even a Category 2 storm. Should I stay or should I go? Should I ride it out in my city by the sea, or head for the hills?

To test the waters I checked into the Craddock-Terry Hotel for a night. Admittedly, I was at first taken aback by the enormous red high-heel woman’s shoe on the exterior of the building. The sight, however, was much to the delight of my girlfriend who never grows tired of shopping for footwear.

That’s it, I thought. This is a place of compromise – beer, shoes and food.

Well, once inside, the more historic nature of the building became evident. We stayed in a deluxe king-size guestroom. It was a mix of contemporary coolness with original exposed beams and brick walls. The oversized walk-in shower was a romantic blast.

Interestingly, an old wooden shoebox awaits each new visitor on the bed. Following the instructions, we fill out our request for breakfast, slide open the box-top, pop in the form and then place the pine shoebox outside our door. Magically, as if Santa’s elves delivered it themselves, a simple continental breakfast appears inside the box the very next morning.

The original Craddock-Terry Shoe Factory was founded in 1888 by John W. Craddock. It was the 5th largest shoe factory in the world. The building which now houses the hotel was built in 1905 as an expansion to keep up with demand. Throughout the hotel today are photographs and other artifacts related to its past.

After we settle into our room, it was time to venture down to Waterstone Fire Roasted Pizza. The restaurant is on the bottom level on the Jefferson Street side of the building. The restaurant obviously features made to order, thin crust pizzas such as the Federal Hill (Red sauce, roasted red peppers, pepperoni, mushrooms and mozzarella, $10.95) and The Florentine (White sauce, baby spinach, sun-dried tomatoes and feta cheese, $9.95). Other menu items include appetizers, salads, pastas and sandwiches. All items pair well with craft beer pumped in from the floor above where the microbrewery Jefferson Street Brewery is located.

Jefferson Street Brewery was opened in 2008. The brewery is the creation of brewmaster Wesley “Wes” Chastain. He operates a 3-1/2 barrel system and produces just enough beer for Waterstone patrons, and the locals who come in for a growler refill.

For Chastain, the beers that make the most sense to produce are the approachable, sessionable beers that compliment great pizzas and American gastropub-style fare.

“We don’t do big, high alcohol beers,” said Chastain. “Stuff people can drink with food and enjoy without worrying about drinking too many.” Jefferson Street Brewery produces an American Pale Ale, Old Style Amber, Bohemian Pilsner, Oatmeal Stout and Honey Wheat – their best seller. “Every third brew I have to brew that one,” he said. “It’s an American-style wheat. Unlike a hefeweizen that has all the cloves and banana flavor this is a real drinkable beer.” Pints are sold for $4 each. A 5 flight sampler goes for $8.75 and the 6 flight is $10.

While there are no official tours of the brewery, patrons are welcome to climb up the spiraling staircase and view the brewery’s fermenting tanks through the glass windowed doors. If Chastain is brewing, he’ll invite you in for a sample directly from the stainless steel tanks and answer any questions.

Chastain is enthusiastic about the success of Virginia craft breweries. Before working at Jefferson Street, he brewed for a Florida chain called Hops Grill Bar, winning two Gold Medals and three Bronze in the Best Beer in Florida Championships. But, he notes, others in surrounding Virginia towns are doing great work.

“Craft beer has really blown up in Virginia,” said Chastain. “Jason Oliver at Devils Backbone started crushing it at the Great American Beer Festival with all these medals.”

After an appetizer and a few beers at Waterstone, it was time to go to the top floor to enjoy dinner at Shoemakers American Grille on the Commerce Street side. Shoemakers features a fine dining experience with shoe themed dining rooms and matching décor. I can say the Blackened Grilled Salmon was exceptional (Lightly blackened, grilled salmon filet with a sweet corn hash and a Cajun Cream sauce, $20). Other enticing menu items were the Kona Fillet (8 oz. Kona Coffee rubbed Filet Mignon, grilled to order and topped with a bleu cheese, “Fromage” sauce. Served with grilled asparagus, $32), Crab Stuffed Trout (Oven roasted with asparagus risotto and a tomato and onion relish, $22.95) and the Filet & Crab Cake (8 oz. Filet Mignon, grilled to order and paired with a 4 oz. signature crab cake, $35).

As you can see, the unique combination of lodging, food and craft beer makes this an intriguing getaway, whether you’re seeking a weekend retreat or fleeing a hurricane.