Let’s Go to The Garage 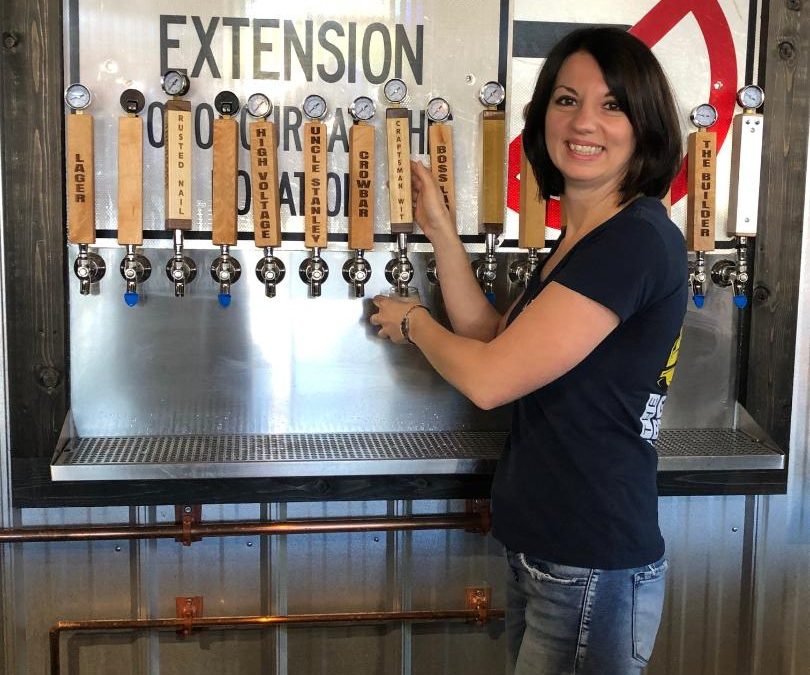 Let’s say you are casually lounging around the homestead, trying to come up with something fun to do. Your “sigo” (significant other) suggests “Let’s go to the mall!” You’re not sure what you want to do, but you’re pretty sure that isn’t it. You reply “How about dropping me off at the Garage? It’s 2 minutes away and you can pick me up when you’re done shopping and we’ll grab dinner.” Your sigo says sure, are you getting an oil change? Or a tune up?” Here you confess you are thinking about a lube job. As in getting moderately lubricated at Chesapeake’s newest fermentation facility, The Garage Brewery, at 1011 Eden Way North.

The Greenbrier area of Chesapeake now has its very own brewery, thanks to the diligent efforts of Ulyana and Roy Gomez the husband-and-wife owner-and-builder team who founded this spot for suds.

Ulyana and Roy both love beer and wanted to be part of the craft beer community. They felt encouraged that the brewing scene in the 757 could be characterized as one of cooperation, not competition. Ulyana, the brewery’s owner, had been renovating and selling houses for the last six years and felt fermentation would be more fun than flipping. Her husband, Roy, the brewery’s co-founder and resident “MacGuyver”, has been a contractor for 25-30 years, and has the construction skills needed to build a brewery.

The 180-person capacity facility opened on 20 July 2019, and it is big and beautiful. One hundred and twenty folks can indulge in beers indoors, while sixty can enjoy the beers alfresco in the outdoor seating area. There is a slogan on Roy’s business card, “Well Built Beer.” It could have said “Well Built Brewery,” because there are a lot of nice touches therein. Roy said “I did the build-out single-handedly. I built the tables, the bar, the flight holders, the mezzanine, the stairs, everything,” and he did it in six months. He does not let things go to waste, and many of the items inside the brewery are reused, recycled, and repurposed from previous projects. There is an 18-seat mezzanine, built out of old pallets, on one side of the tasting room. The mezzanine can be reserved for private functions and provides a bird’s eye view of the Garage. The stairs leading up to this lofty perch are from a former Norfolk pier, and you can peer down on tables fashioned of recycled two-by-fours. All of the bricks you see at the Garage are reused. Some of the windows that partition the brewery from the tasting room come from a former Norfolk church. All we can say is praises be and please pass the pint!

The Garage Brewery has a seven-barrel (217 gallon) brewing system, and they brew two to three times a week. Continuing in the recycle/reuse mode, spent grains used to make the beers are given to a local farmer who feeds it to his chickens and pigs … which could be one of the reasons locally produced bacon tastes so fine.

Every brewery needs a head brewer, and a friend steered them to the talented Kelsey Robbins, an area homebrewer. Roy said, referring to Kelsey, “He’s amazing, he’s a genius … street-smart and knows his chemistry.” Ulyana and Roy also hired an assistant brewer, William Sawyer, to help carry the water, er, malt, at the Garage. A former music teacher for Pre-K through the 12th grade students, this fall Will is crafting lagers, not lesson plans, and he’ll be paying attention to fermentation not 1-4-5 progressions.

When you belly up to the bar, beers are offered in two sizes, five-ounce “tasters” and larger servings of ten or sixteen ounces, depending on your selected beer’s alcohol by volume (ABV); big ABV, small glass. Flights are available, growlers and crowlers are not.

What’s on tap at The Garage?

When Chris visited there in late July, they had eight beers on tap, many names reflect mechanical aptitude and construction work (Roy’s bread and butter).They had Light Bulb, a relatively low alcohol American craft lager (4.5% ABV), and Rusted Nail, an Amber Ale (6.3% ABV). For those of us who love Belgian Wits (the beer, not the comedians), their Craftsman Wit comes in at 6.5% ABV. Uncle Stanley is a 5% ABV thirst-quenching sour Gose. High Voltage, a West Coast IPA, comes in at 7.5% ABV and a whopping 100 IBUs. That is a mighty bitter beer; after a 12-ounces of that, Chris sounded like Melissa Etheridge (“Somebody bring me some water ….” Actually, hydration is always a good idea). F-Bomb is a double IPA and is a mammoth 9% ABV mouthful of malt. Crowbar is a beautiful English Porter, dark as motor oil, and 7% ABV. Last, but certainly not least, Boss Lady Vol. 2, is a triple-berry sour made with blueberries, blackberries and raspberries, and cures what ales you at 8 % ABV. This beverage is a tart glass of antioxidants and absolute joy. If you come to the Garage and don’t take this bliss-inducing beer for a road test, you’re guilty of a moving violation. Of course, beers on tap will rotate so put the pedal to the metal and get to the Garage soon!

What’s on the horizon, beer-wise, at The Garage Brewery?  Well the brewery acquired some just-picked hops (Centennial, Medusa, Nugget and Zeus) from the Fleming Hop Farm in Chesapeake and used them to make a wet-hoped India Pale Ale; it should be available in mid-September.