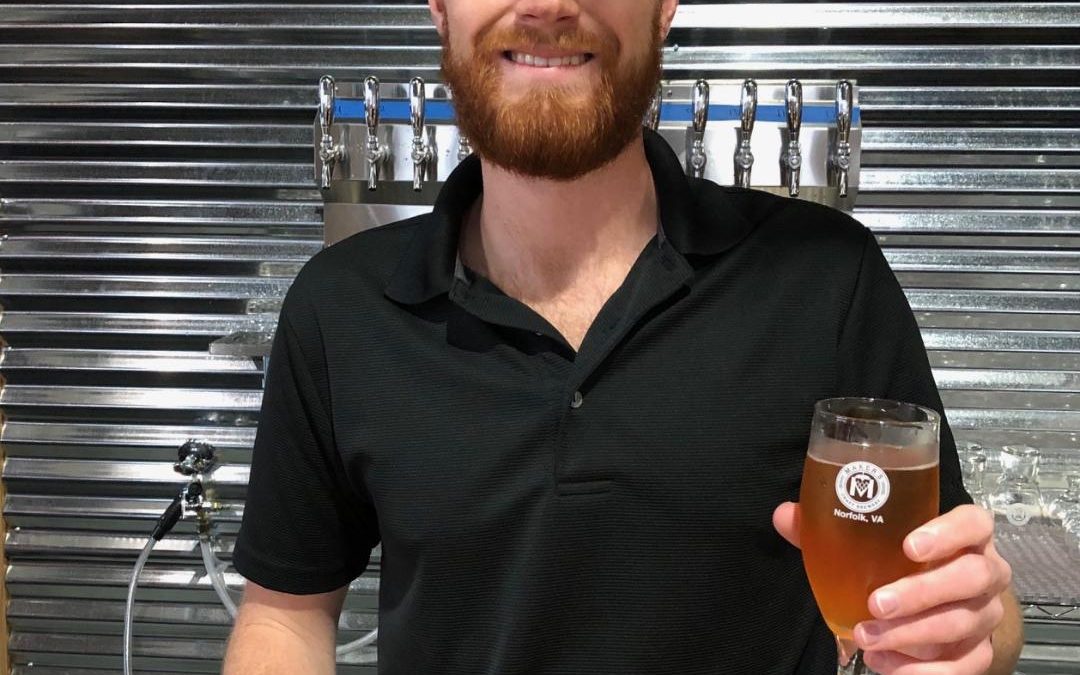 By Chris Jones and Diane Catanzaro

Rick Mariani likes to make things. He built his own sports car, and kept his buddies’ sports cars on the road by repairing them. He had such a knack at making repairs to keep his buddies’ cars on the road that they told him “You’re a damn maker.” He’s been in manufacturing most of his life. He’s an owner/operator of Sorrentino Mariani & Company, a company located here in Norfolk, VA, that builds a variety of furniture on a large scale. You need 500 tables that look Mission-esque for your new hotel? Talk to Rick.

In addition to making furniture, Rick wanted to make a consumable product, something that he liked, but what was it going to be? Well, he likes beer and he likes cigars, so that narrowed the choices down for him. He’s a homebrewer and can make a pretty good ale, but not on an industrial scale, so he’d need a brewer. He’s a cigar aficionado, but can’t make one and doesn’t know quite enough about them to be a cigar retailer, so he’d need someone that knew the difference between a panatela and a perfecto. Wait a minute, he’s “a damn maker,” he could make a place where he could combine these two likes into a livelihood – he could make a brewery that had a cigar retailer and cigar smoking room. He could partner with a brewer and a cigar purveyor, and the maker would have it made. And thanks to the sobriquet from his sports car buddies, he had a name, too, Maker’s Craft Brewing.

Rick told Chris, “When I started looking at this I realized how little I knew, so I started talking to people like Michele,” meaning Michele Lowney, a talented brewer with over 20 years of experience brewing beer in a variety of places including Phantom Canyon Brewing in Colorado Springs, CO, and Mountain Sun Brewery in Boulder, CO. Rick and Michele were apparently were in synch, and Michele became Rick’s Head Brewer and partner in the business. Now they needed a building to make into Maker’s.

Rick’s search for an appropriate building began several years ago. A building in the Ghent section of Norfolk was initially considered, but that didn’t pan out. The pursuit for a perfect place to pour pints continued until they discovered a big building at the corner of Church Street and 23rd Street in Norfolk’s “Railroad District,” a stone’s throw from the former Farmer’s Market location on Church Street. Rick felt the building had “good bones in it,” with character, a high ceiling and a lot of space inside, and with some “making,” they could put flesh on that building’s bones.

So at this stage you had a “maker,” Rick, a brewer, Michele, and a brewery under construction. They needed two more things, a cigar source and a person to help them run the place. Where did they find a cigar purveyor?  They chose Emerson’s Cigars, returning Emerson’s to the Norfolk market. Where did they find their “front of the house” manager? Up north, in the land of deflated footballs, in New England. They selected Marquis Witcher, a first-string veteran food and beverage marketer-manager who had been working at entertainment venues associated with the New England Patriots. After talking with Rick for a bit, Marquis left Kraft for craft, and made his way to Maker’s.

Construction was completed and their grand opening was March 9, 2019.

The inside of the building is beautiful. In the large, open, high-ceiling tasting room you can see the results of a lot of creative craftsmanship. The tables and chairs, the bar, even most of the windows were made at the Sorrentino Mariani & Company manufacturing facility. Look in one direction and you can see the 20-barrel brewhouse and seven large fermenters. Look in another direction and you can see the enclosed cigar smoking area with its own bar and a walk-in humidor operated by Emerson’s Cigars that has more stogies for sale than you can shake a stick at. The outdoor area is a work in progress, but by the end of April will have tables, fire pits, and a large open area where you can enjoy your craft beer alfresco.

There is a retail corner in the tasting room where you can get traditional brewery swag (glassware, T-shirts, etc.) and something a little unusual, coffee and jewelry. Cups of coffee are free, but you’re encouraged to donate a buck when you get one. A dollar from the sale of each bag of coffee beans goes to a pug rescue facility in Pennsylvania. Come on, caffeine achievers, drink a little coffee, save a little dog.

There is also beer available in the tasting room, and the beer is why we’re here, right? In early April there were eight beers on tap, all of which were under 6% alcohol by volume (ABV), which, for “brewery commuters” is a beautiful thing. The Red IPA (5.3% ABV) and the Rye Pale Ale (5.2% ABV) are both quite tasty. The Rauch Beer (3.5% ABV) is smokin’ and would be the perfect accompaniment to some food truck barbecue. They make a crisp Pilsner Ale (brewed as an ale instead of a lager, 5.2% ABV), pretty much a Norfolk version of a California “steam” beer. Their Mango Pilsner Ale (5.3% ABV) is loaded with flavor and fruit, as you know, is part of a healthy diet. Get flights of four, get half or full pours, get growlers galore.

Maker’s Craft Brewery is located at the corner of Church Street and 23rd Street at 735 E. 23rd Street, Norfolk, VA 23504 in Norfolk’s “Railroad District.” They’re on Facebook. They’re closed on Mondays, and are open from 4 to 9 PM Tuesdays through Thursdays, and earlier on the weekends; food trucks are routinely scheduled for your dining pleasure; see Facebook for the nitty gritty. Make your way to Maker’s Craft Brewing.