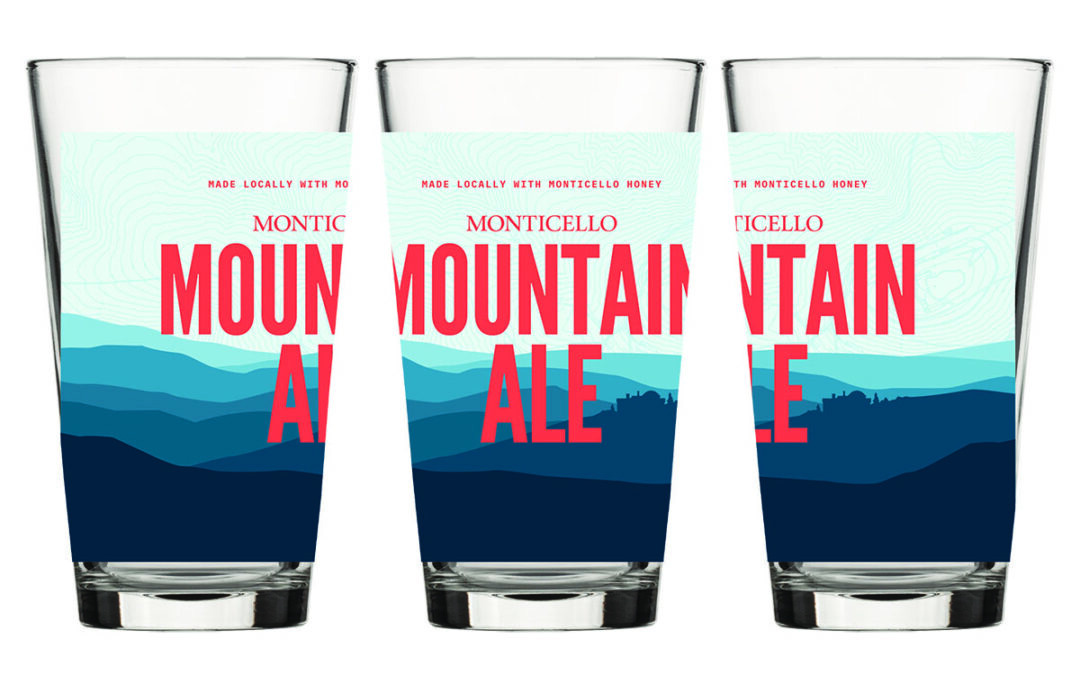 Beer was such an essential ingredient to colonial life, Thomas Jefferson designed spaces for brewing and storing home-brew on the grounds of Monticello.

Much has been written on the topic, and now some 210 years after Jefferson’s first batch was bottled — May 12, 1812 — a modern Monticello Ale makes its debut at the famous home of the nation’s third president.

Monticello Ale — made with honey harvested onsite — is a collaborative effort between the Monticello Foundation and Blue Mountain Brewery in Afton, Virginia.

To learn more about this exciting venture, I reached out to Stephanie Fox, the retail product manager at Monticello, and Blue Mountain’s Taylor Smack.

Virginia Craft Beer Magazine (VCB): How did a beer collaboration become of interest to the Monticello Foundation?

Stephanie Fox: Monticello has a number of products made with ingredients grown in our gardens—pepper jelly, hot sauce, Bloody Mary mix. We wanted to explore how we might do the same with a new beverage, and beer brewing has a long history at Monticello.

When we started the project, we knew we wanted to partner with a local brewery that shared similar values and goals. After meeting with Taylor, we knew that Blue Mountain was the perfect fit. Like Monticello, they are focused on sustainability, investing in our local community, and creating a high-quality product.

VCB: Is the recipe based on those of Thomas Jefferson or of a style likely to have been brewed at Monticello by his wife or Peter Hemings?

Fox: We wanted Monticello Mountain Ale to celebrate the long tradition of brewing at Monticello.

VCB: Can you provide the ingredients used and ABV?

Taylor Smack: At first glance this is a delicious, relatively simple beer—two-row pale barely malt, a small amount of crystal malts, and an easy hand of German and English hops. What sets Monticello Mountain Ale apart is the secret ingredient: honey harvested from Monticello’s own beehives. The bees help pollinate Monticello’s gardens, and in turn, a taste of the nearby land is in our beer.

We also wanted to nod to the history of beer at Monticello, which would have been a beverage with only moderate strength, also described as a “table liquor,” consumed at Thomas Jefferson’s dinner table. Monticello Mountain Ale has flavor and depth, and at 5.5% ABV, it is built on the same principle of a moderate beverage for daily consumption, though it is just a bit stronger than Jefferson’s table beer. Whether you enjoy it at Monticello or a Blue Mountain location, we’d humbly suggest that it’s a ‘must try’ beer in 2022.

VCB: Can you share details of the packaging (cans/bottles) and label design?

Smack: This first springtime release of our collaborative beer will be in draft, six packs of 12oz bottles, and a limited run of corked-and-caged 750ml bottles.

Those visiting Monticello will find it available at Monticello Farm Table café (draft) and Museum Shop (to-go bottles). It will also be available at Blue Mountain’s two locations in Nelson County, and South Street Brewery in Charlottesville. There also may be a very limited amount of this beer funneled to retailers through Blue Mountain’s distribution network.

Fox: There will be rather limited distribution of this special beer, and what there is will be centered around the Charlottesville area. What we really want to do is encourage people to experience Monticello Mountain Ale onsite at Monticello itself or at the rural and beautiful Blue Mountain locations.

Fox: 100% of beer sales at Monticello will go toward the historic site’s dual mission of education and preservation.

Fox: We hope Monticello Mountain Ale is the first of many collaborations with Blue Mountain Brewery. Our goal is to develop other beers that include Monticello-grown ingredients and connect people with history.