NEWS: Grinding Out a Historic Lager 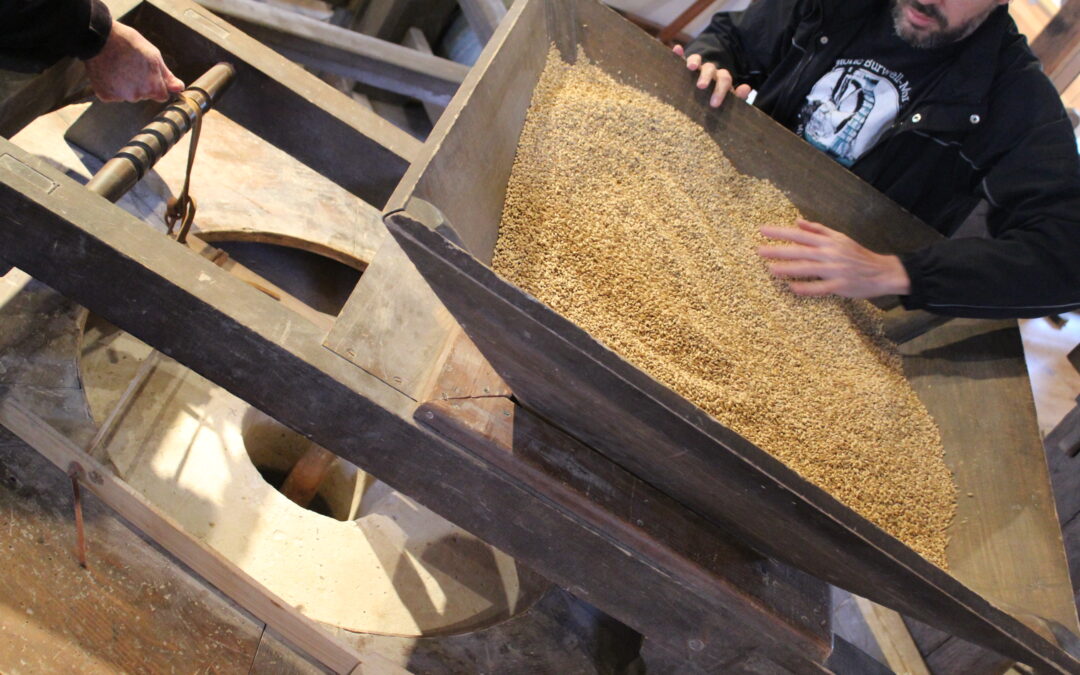 It was the perfect task for Stalvey whose organization owns and operates an 18th century working water-powered gristmill in Millwood, Virginia called the Burwell-Morgan Mill.

Using the mill’s grindstones, they ground-up six-row barley for the brewery to use in a historic process in making a historic beer.

The finished product — Burwell Stone Lager — will be available in June for tasting at the nano brewery’s tasting room.

To learn more about this intriguing project I reached out to Nathan Stalvey to learn more.

VCB: How did the idea come about to collaborate on a beer using the Mill?

NS: It really was a joint effort.  Broken Window’s brewer, Jacob Arnaud, was looking for something different to try as a brewer, and I was looking to work with a craft brewer on some way the historic Burwell-Morgan Mill could help in a brewing process.  Once Jacob showed me how he needed the barley ground, I knew the Mill would be able to grind it in the manner he needed.

VCB: Why was a lager beer style selected?

NS: For much of the 19th and 20th centuries, lager was the most popular style of beer in the United States and it wasn’t close.  This was heavily influenced by German immigrants who came to the US in the 19th century.  Also, at the end of the 19th century, artificial cooling was invented which allowed lagers to be brewed all year regardless of weather conditions.  If you were to go back in time to the turn of the 20th century and went into any tavern or pub, most if not all patrons would be drinking a lager.  It was readily available, and with a low ABV you could drink more than a few at at time.

VCB: How would you describe “pre-prohibition” lager as a product?

NS: A “pre-Pro” lager is different than the mass produced lagers that you see today in a number of ways.  First, a pre-Pro traditionally uses native six-row barley instead of two-row.  This style also has a malty, grain-like sweetness that gives it more flavor than lagers produced today.

VCB: Where was the barley grown for this beer?

NS: Finding six row barley was difficult, but Jacob was able to find some from Wisconsin.

VCB: Mills were either powered by wind or water. How important were mills in rural Virginia in the past?

NS: Mills were extremely important to Virginia in the past, especially in the Shenandoah Valley.  By the time the Revolutionary War ended, wheat was becoming the largest cash crop in the United States.  Water powered grist mills like the Burwell-Morgan Mill began sprouting up all over the country.  For most of the 19th century, the Shenandoah Valley was the largest supplier of wheat in the United States.  These mills were either commercial mills that ground hundreds of thousands of pounds of grain every year that were then shipped across the country and into Europe, or smaller residential mills that served the needs of larger estates.  At one point there were over 40 mills in Frederick County and Clarke County alone.  However, by the mid-20th century most of these Mills had fallen into disrepair or were demolished.  Very few remain, especially those that are still operational like the Burwell-Morgan Mill.  This was a result of modern technology and larger, industrial mills.

VCB: When and how was the Burwell-Morgan Mill restored and made operational?

NS: The Burwell-Morgan Mill was built between 1782-1785 and remained a commercial mill from that point through the turn of the 20th century.  By the 1920s, the Mill was starting to fall into disrepair and by the 1950s it was no longer being used.  In 1968, the Clarke County Historical Association bought the Mill and through two massive restoration projects in the 1970s and 1990s, brought the Mill back to its former glory.

VCB: Who were the members of the grind team for this project?

NS: We once worked with Escutcheon Brewing and had them brew a Colonial-style ale for a talk we did a few years ago on the history of brewing in Virginia.  However, the Mill itself was not used in any part of the brewing process.  This collaboration with Broken Window Brewing is the first such collaboration we have done and we certainly would love to do more.