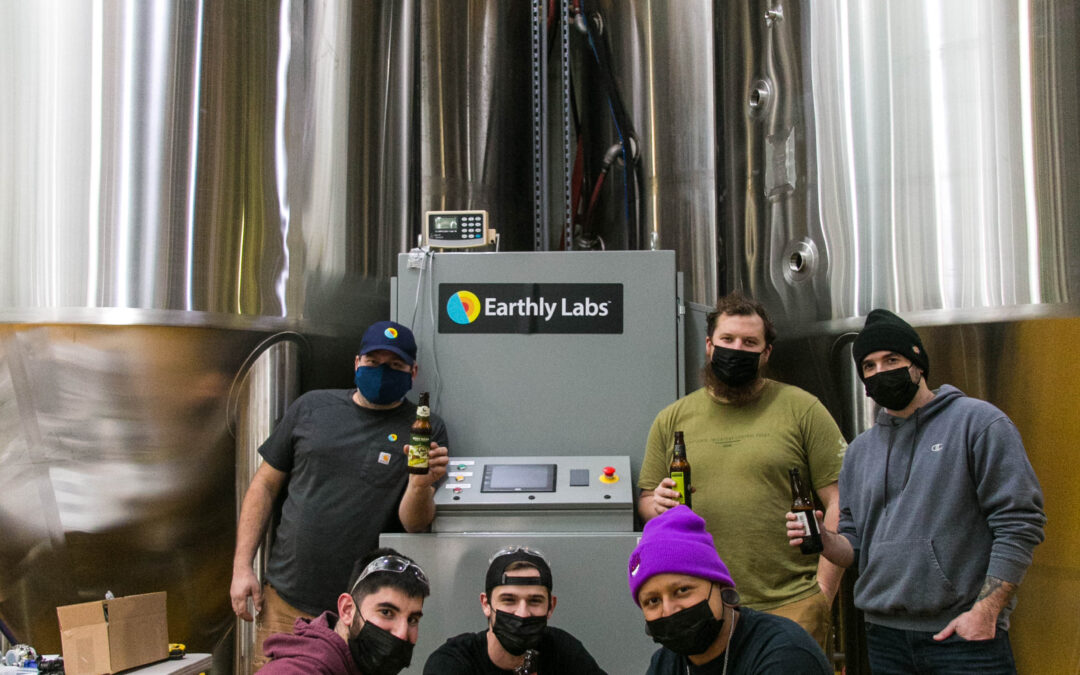 When you hear the term “carbon capture” used it’s primarily in reference to carbon emission originating from oil production, power plants and factories producing steel and other industrial goods.

Carbon is everywhere it seems, even in the making of your beer.

“We’ve always shared a desire to be kinder to our planet,” said Julie. “I grew up traveling to remote natural places, and Ike grew up in a household of precocious environmentalists. So, our plan when opening Old Bust Head was in part to show other businesses how environmentally friendly investments can have a compelling pay back, and to show our community that life can be both rich and sustainable.

“In 2013 our commitment to environmental sustainability became much more personal.  We were in the midst of digging the eighteen 500’-deep geothermal wells that would reduce our costs of heating and cooling, and were renovating a 1950s warehouse on the old Vint Hill farm turned secret military listening post for our taproom, when we learned our daughter Finley had a rare liver cancer.

“It is a challenge to tell you about Finley in short order—she was well known for her uniquely lighthearted and exuberant spirit and at the same time for her serious concern over the threat of climate change,” Broaddus continued. “She did everything she could personally to reduce her carbon footprint—and in her upbeat yet persistent way, got others to do the same.  Finley just had been accepted early decision to Willam & Mary to study environmental policy when she got the news.

“Over the next 5 months, Finely and I lived at John’s Hopkins where she fought both cancer and for the planet. In her usual non-judgmental style she trained the nurses to turn out the lights in empty rooms, and not to use styrofoam or waste multiple plastic pill cups.  She asked people to plant a tree rather than send flowers or other gifts.  She channeled the love and support she was receiving into love and support for the earth.

“That February, Finley’s aunt suggested she start a fund so people could do more.  Finley named it ‘Finely’s Green Leap Forward Fund’ and by March 12, her 18th birthday, the fund had received over $67,000. By Earth Day, when Finley made the first two grants to The Greenbelt Movement in Kenya and the Cacapon Institute in West Virginia, the fund was well over $100,000.

“We lost Finley a little over a month later on June 2, but her message and her fund has continued to grow.  To date, the fund has granted $345,000 to organizations fighting climate change.”

In 2020, Old Bust Head Brewing Company installed a100-KW solar array on its roof that produces 50% of the electricity used to brew its beer.

Drawing further inspiration from their daughter, Ike and Julie committed the brewery to purchasing a $100,000 “Cici” unit to capture CO2 produced from yeast in the brewing process.

“The captured CO2 produced during fermentation is reused during other stages of the brewing process where CO2 is required, such as purging our bride tanks or for our beer lines in the taproom,” said Cara O’Neal, Old Bust Head’s event and social media coordinator. “Capturing the CO2 that we produce during the brewing process will reduce or eliminate our need to purchase outside CO2.”

According to O’Neal, all of the brewery’s products will use this method including upcoming limited released, draft-only beers like Carrot Cake Stout and Pineapple Certain Swagger DIPA.