Settle Down Easy to Inspirational Beer 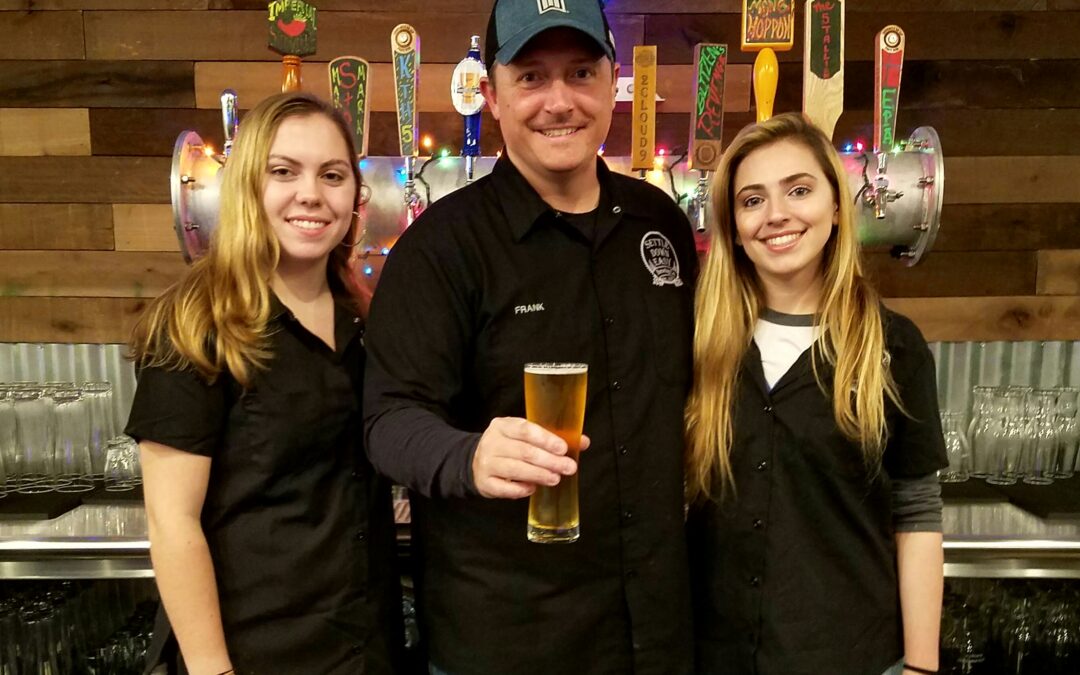 (Co-owner Frank Kuhns behind the bar of the tasting room with tasting room staff Lexi and Angela.  Photo by Jefferson Evans.)

A truth of life is that the most impactful aspects of a person’s journey often involve a mix of joy and sadness, and so it is with the story of Settle Down Easy Brewing Company in Falls Church, VA, towards Merrifield and just off Route 29.

Back in 2015, owner Frank Kuhns unexpectedly lost his younger brother, Bryan. Frank has been a homebrewer for 18+ years and when friends Chip Dirth and Jimmy Boykin approached him about opening a brewery he immediately knew that if he were to open a brewery, he would want it to be an homage to Bryan. His brother had worked as a bartender at the Veterans of Foreign Wars (VFW) Post in Brockway, PA and at the end of each night his “last call” song was always “Ramble on Rose” by The Grateful Dead, a song that includes the lyrics “Did you say your name was ramblin’ rose? Ramble on baby, settle down easy, ramble on rose”. And so a brewery name was born, a name born of both joy and sadness — Settle Down Easy.

Chip, Jimmy, and Frank knew each other through their kids sports activities. Chip and Jimmy loved Frank’s beer and on Memorial Day of 2017 Frank showed the two how to homebrew. When the three men enjoyed that batch of beer over the 4th of July weekend, Chip and Jimmy expressed their interest in opening a brewery and having Frank be in charge of brewing the beer. To Frank this felt like the stars aligning and his brother looking down with a smile because it was after Bryan passed that he started thinking himself about opening a brewery and playing around with logo designs and other intellectual property. The three men took a couple of weeks to brainstorm and when they met again a plan came together in fairly short order, in no small part because between them they brought a lot of useful experience to the table; Frank having worked 20 years in the hospitality business and having opened and/or renovate multiple properties, Jimmy with a degree in hospitality, and Chip having a background in procurement.

In short, the three men know how to get things done so once the plan was in place they moved quickly.

Frank knew right away he didn’t want to act as head brewer. An ad placed on ProBrewer.com worked out really well as it connected them with brewer Henry Jager, who had become lead brewer at Twisted Pine Brewing in Boulder, CO and then moved on to becoming a Brewing Team Leader at Heavy Seas in Baltimore, MD where he primarily brewed the Loose Canon IPA. After 5+ years at Heavy Seas, Henry had decided he was ready to brew a greater variety of styles and to have the freedom to experiment more. And seeing as how Henry is also an avid Grateful Dead fan, well it just seemed to be a natural fit with what was planned for Settle Down Easy. Later on Derek Stillwagon, a familiar face to those who visit MyLHBS homebrew shop off Route 7 in Falls Church, would come on as an assistant brewer. Caboose Brewing in Vienna, VA was generously loaned them their Sabco system which was utilized to refine recipes for beers such as the Sweet Scoville Sting Honey Jalapeño Ale and the No. 1 Dry Hopped Kolsch, after which Henry came up with the 2 Cloud 9 NEIPA and generally was off and running developing recipes for further beers such as the Hop Wah Phonic West Coast IPA among others.

As to a location, Jimmy did the primary legwork and found a potential space in the form of an old bicycle store, Bonsai Bike that had been there almost 20 years. A general contractor checked the space out and indicated it would work as a brewery. What really helped make the space attractive was that the developer Ray Schupp who controlled the space was a big fan of Caboose Brewing and loved the ideal of adding a brewery to his portfolio. Ray said “I want a brewery” and meant it and went the extra mile to help the Settle Down Easy owners make it happy. Frank, Jimmy and Chip took over the space in April of 2018 and opened on November 16, 2018. The men did find Fairfax County somewhat challenging to work with (as an example a grain mill was not approved so all the grain enters the brewery pre-milled), and echoed the comments of other brewery owners and would-be brewery owners who have described Fairfax County as better at saying what you can’t do than what you can do, but they persevered. An additional bonus of the location turned out to be the proximity of El Tio Tex-Mex Grill, which provides hot food such as several different tacos during my most recent visit, onsite inside the Settle Down Easy taproom. The brew house itself includes a 5-barrel system from American Beer Equipment out of Lincoln, NE.

Frank makes a point of mentioning how helpful the NoVa beer community was in helping he and his co-owners plan the brewery, including how to best approach the licensing and build out, overcome a variety of obstacles, and generally make decisions that helped the brewery succeed and become a space “where you feel better when you leave than when you arrived.” In particular he mentions the good people at Beltway, Crooked Run, Ono, Mustang Sally, Twinpanzee, Caboose, and Lake Anne Brew House.

The original plan was a double capacity in 3 years, but they managed that in half the time. New tanks have been added with more coming that will max out capacity in the present space. There is regular canning on a small scale and Settle Down Easy is available at 8 to 12 accounts such as Open Road, Dogwood Tavern, and Fosters Grill in Vienna. Down the road are plans for an expanded barrel-aging program, a sour program, and eventually, perhaps, a second location but Frank stresses their desire to be cautious and strategic in all phases of planning. But the success so far speaks for yourself, so check out Settle Down Easy Brewing Company, maybe on Star Wars Trivia Night, have a beer or two, some food and good company, till it’s time to ramble on, feelin’ better than when you arrived.