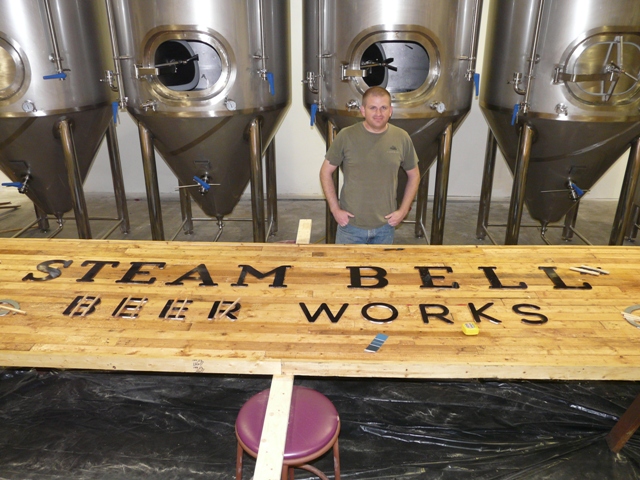 Story and Photos by Steve Deason

Brewer Brad Cooper is proud of his name but not for the reason you are probably guessing.    A cooper is a person who makes wooden vessels bound together by hoops such as casks or barrels.    Cooper named his new brewery Steam Bell Beer Works after a device used by these namesake craftsmen.   The bell shaped device steams the assembled wood or staves allowing the cooper to bend them into shape.  The brewery is the first production brewery in Chesterfield County in modern times.   The only other brewery in the county is Extra Billy’s BBQ.   Cooper sees Steam Bell adding to the Richmond craft beer scene with a menu of small batch farmhouse ales and sour beers though his primary focus is on “providing a place Chesterfield (beer fans) can come to.”

While at VMI, Cooper worked summers at a crushed stone supplier.   After the economic downturn of 2008, Cooper left VMI and became full time at the supplier.   Cooper was introduced to home brewing from friends he met caving or spelunking.   He says he had the “bug” to be a commercial brewer from the very first batch.  Cooper heard the owners of Hardywood Park Craft Brewery speak at a homebrew club meeting.  When they asked for volunteers, he signed up to work the bottling line.  After six months of working for free, Cooper was hired and worked part-time for another year at Hardywood.  A promotion at his day job caused him to leave the Hardywood position but Cooper “knew he wanted to get back.”   After a bad day at his work in quality control, Cooper got quotes for commercial brewing equipment.  The prices shocked him and so he put the papers away.  On a third really bad day, Cooper’s co-worker shared that they “only have about another forty years of this.”   At this point Cooper said he realized I have to make a change.  Shortly after, Cooper shared his dream to open a brewery for the first time to a friend who in turn offered to help with business advice and possibly even to invest.  With such positive encouragement, Cooper spent the summer of 2014 working on a business plan.  In the fall of 2014, a co-worker stored a growler of Cooper’s home brew in the company refrigerator which led to both of them being fired.   Cooper panicked and applied for any job he could find.  Once offers came in he realized he didn’t want to get comfortable again and be distracted from his brewery goal.  Therefore he took a part time job with Old Dominion Canning.  Cooper moved back into his parents’ home, sold his truck, and started looking for investors.   His girlfriend said he needed to find a better job and broke up with him.  A week and a half later he got the initial investment he needed to start work on the brewery.

Brad laughs often when telling his story.  Still he admits there have been many days where he has been totally overwhelmed.   Steam Bell Beer Works costs about forty thousand more than he planned but his timetable has held.   Cooper looked for a partner early on but never found one that was a comfortable fit.   In addition to family, friends and investors, Cooper says the support from Richmond area breweries has been amazing.  He says every single brewery has helped when he called saying, “I’ve got this going on, how did you all handle this?”

Steam Bell’s tasting room occupies just under one third of the six thousand square foot facility located within roar of the Southside Speedway.   The floor plan is open so customers can see where the beer is brewed.   The brewery’s ten barrel brew system is supported with four twenty barrel fermenters and a twenty barrel brite tank.  Two thirty barrel vessels bought as part of an equipment buy from a winery will be used as sour tanks.   Steam Bell Beer Works will sell growlers at the brewery and kegs commercially.   Hand bottled beers such as bottle conditioned “Brett” and sour beers will be available in the future.   The brewery should be open by publication or shortly after.

Steam Bell’s flagship beers include a Belgian farmhouse style grisette.   According to Farmhouse Ales by Phil Markowski, “As saison was considered the drink of farm workers, grisette was the brew of the miners.”  Cooper points out the connection to his work in the mining industry.   Most locals will make the connection to the nearby Mid-Lothian Mines Park which showcases the history of the first commercial coal mines in America.   Steam Bell’s Grisette is 5.2% ABV and is light and crisp with just a slight hint of spice.   It is made with pale malt, rye and oats fermented with saison yeasts.  With a nod to the south, Steam Bell’s 6.1% ABV lightly tart Golden Sour  features locally sourced stone ground grits, plus Belgian Pilsner Malt, and a little bit of rye.  The wild yeast and bacteria in the beer was captured by Cooper from the Chesterfield night air.  A collaboration brew with Will Correll owner of Buskey Cider is in the works as a fall alternative to the many pumpkin beers offerings.

In November the first “Hops in the Park” event was held at Henricus Historical Park in Chesterfield County.    All participating breweries were from Virginia and each offered a beer using at least one Virginia sourced ingredient.   Steam Bell Beer Works supplied the only beer made with hops grown at the park itself. Working with David Goode of Piedmont Hops, Cooper made a beer using 100% Virginia ingredients.  The beer was named 1611 which was the year this second permanent English settlement in America was founded.  The beer was the first pilot batch brewed at Steam Bell.

Reporters Note:  I got an opportunity to taste both of Steam Bell Beer Works flagship beers.  Based on those wonderful tastes and the welcoming I received, we Southside beer lovers should be delighted Cooper followed his dream and brought another first to Chesterfield County.