The Secret Is Out, Eavesdrop Has Something For Everyone 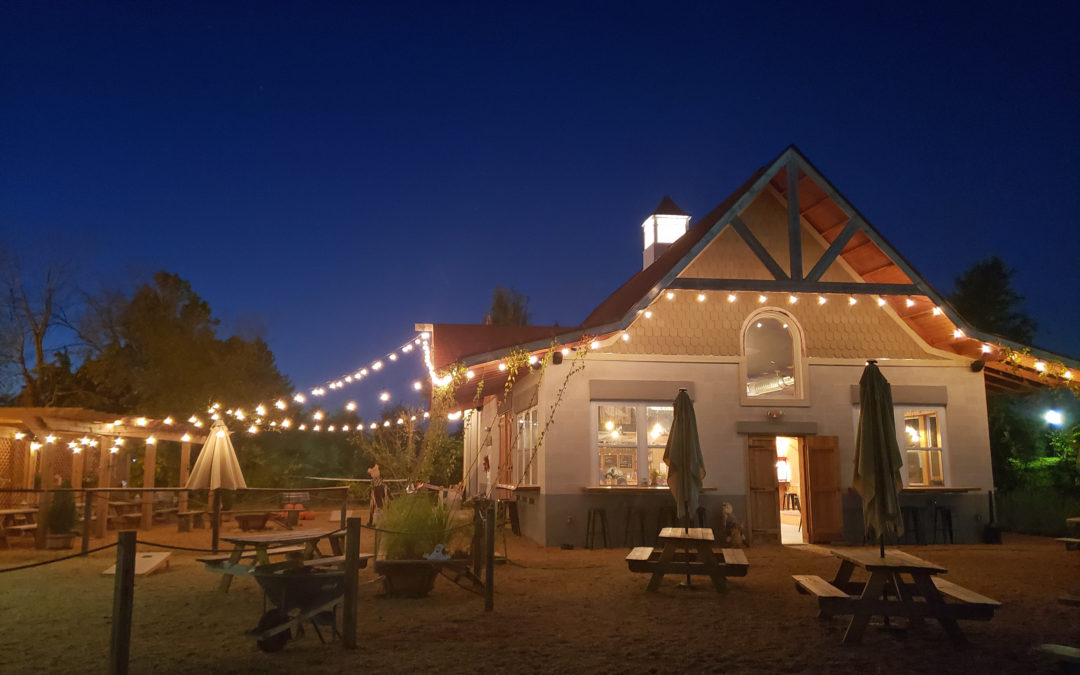 And it all began with pigeons.

Now THAT is a sentence that no beer writer ever expects to write, but the fact it sorta applies in the case of Eavesdrop Brewery is just one of the things that makes Eavesdrop unique and fun. The brewery, located right off Route 28 in Yorkshire, Virginia between Centreville and Manassas, has been the baby of Head Brewer Bob Esposito, owner and CEO Frank Madden, owner and horticulturist Jeb Carney, and Jose Flores who began as a bartender on day one and now wears many hats handling task suited for a General Manager, Social Media Director, Events Coordinator, and more. Two years ago Jeb and Frank came together with a desire to open a brewery that would be a welcoming space with pleasant décor inside and gardens and green space outside that would be both fun and also provide ingredients for the brewing process. And to nurture a spirit of collaboration that would involve the beer, the food, and the local community.

But back to those pigeons, ‘cause I know you have been wondering. Many years ago the previous owner of the small building that became part of the brew house was passionately into racing pigeons and kept up to 400 or 500 pigeons on site at the height of his involvement with the hobby. But then Manassas Regional Airport came along and that was that, because as the movie “Sully” taught us, birds and airports don’t mix. Frank was familiar with the history, being the owner of adjacent land and businesses and bought the property that is home to Eavesdrop about 10 years ago. Jeb designed the layout of the brewery inside and out while Frank handled the actual build-out as Frank has general contractor skills, including previous build-outs and experience dealing with permits and inspections. Once the grounds were ready to be developed Jeb stepped in again to establish the hops, herbs, berries and more that would go into the beer and food that Eavesdrop would eventually serve its customers.

When the time came for brewing, Bob stepped in to handle on-site brewing duties along with helping to coordinate brewing collaborations and off-site contract brewing. Eavesdrop gives you a sense of “we aren’t afraid to get out of the box and if it works we’ll find a way to fit it into the plan“, both with the beer and the variety of activities planned on site. Nearby Sinistral Brewing Company contract brews the Yorkshire IPA, thus helping to ensure that one of Eavesdrop’s most popular beers is always on tap. Collaborations have included a pilsner with Old Bust Head Brewing Company of Vint Hill, VA and a sour with Dynasty Brewing Company of Ashburn, VA. Bob tells me “I started home brewing 20 years ago and went in hardcore about 12 years ago” and that after becoming friends with Frank and Jeb and learning their plans “I convinced my wife to sign on with me transitioning from the world of IT to making a living as a brewer”. Bob mentions that after getting a degree in psychology he had actually down the path of being Pre-Med “which included microbiology and chemistry classes that it turned out I really loved” and which fed the attraction of becoming a brewer. 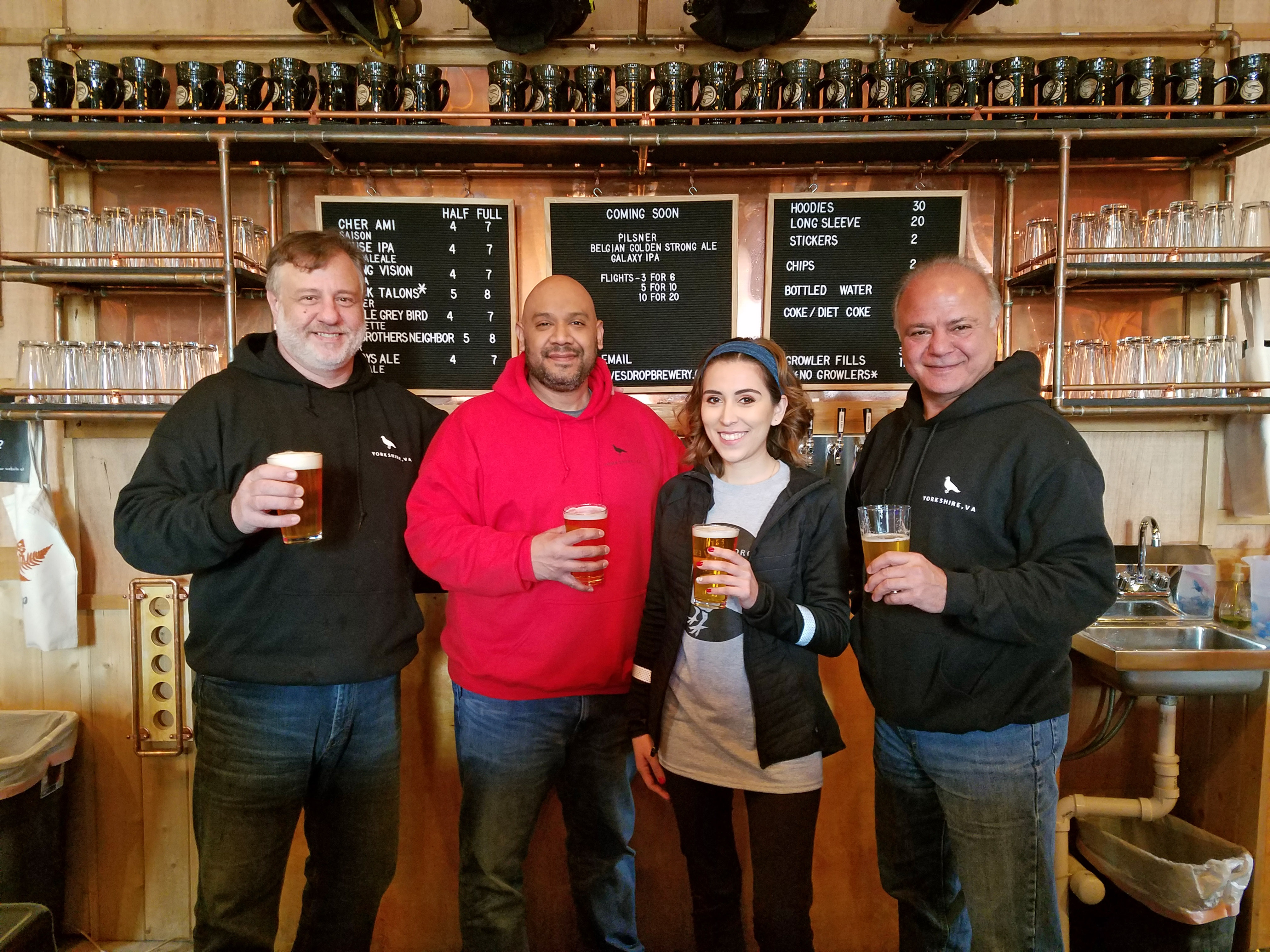 The Eavesdrop brewing system is a 2.5 barrel direct fire system from Psycho Brew Brewing Equipment out of Greenville, Michigan and includes a mash tun, brew kettle, and three fermentation tanks. Where Eavesdrop gets a little bit crazy is their wood-fired outdoors system, including a coolship – a method of (relatively) quickly cooling down wort by pumping it into a shallow vessel to allow a large surface area to be exposed to open air prior to fermentation but in the process also allowing the wort to be exposed to yeast and bacteria present in the air resulting what is referred to as spontaneous fermentation which can result in a variety of interesting and challenging flavor profiles, a process best exemplified by the lambic beers of Belgium. Eavesdrop’s fun, creative use of their outdoor system has included brewing a saison under the super blood moon of January 2019. Brew on ye mad scientist. The traditional brewing has included beers such as an all galaxy hops NE IPA, a strawberry wit, a west coast IPA, a Belgian strong ale and much much more.

The farm to table part of Eavesdrop’s brewing has included the use of Canadian Red Vine Hops, a historical varietal that can be traced back to some of the earliest hop farms of North America and which is known for vigorous growth and high yields and which has been on the comeback. Lemon basil, juniper, and spruce tips are also among the ingredients that have gone into beers brewed on site. Food-wise there has been a focus on BBQ, including from Uncle Freds BBQ and Swill and Swine BBQ as examples. As the weather warms the outdoor activities will be accentuated by picnic tables, fire pits, sprinklers for the kids, and much more. Adults won’t be ignored though as the upstairs deck will adults only at times and feature cigar club meetings and other adult oriented events. And the adjacent building includes a room called the Lofthaus with a capacity of 80 people and which is already in use as an event space.

So get out of the box my friends and visit Eavesdrop brewery if you can. The main tasting room is open, spacious, and comfortable. The beers are varied, tasty, and quirky. The outdoor grounds are welcoming with all sorts of gardens and greenery. The vibe is casual and family friendly, pets are welcome, and a good time is always had. Cheers!

NOTE: Head Brewer Bob Esposito has replaced Jeb Carney as one of the principal owners and Eavesdrop “Our Black Talons” won a gold medal and the “Ockobernacht” won a bronze medal in a sanctioned brewing contest in El Dorado County, California.