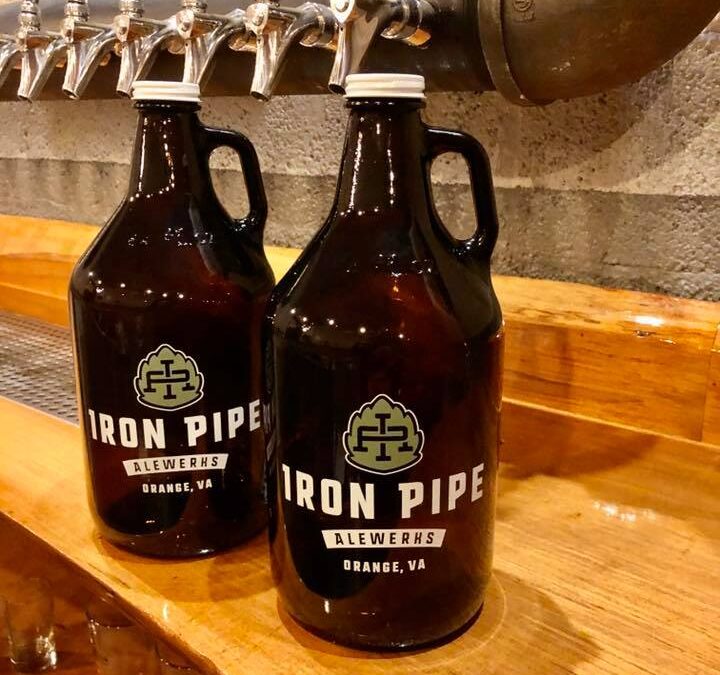 (Iron Pipe Alewerks is one of Virginia’s newest breweries and is located in Orange. Photo courtesy of the brewery.)

Small towns in the south rarely have spots open on Sundays, but if you’re lucky enough to stumble through the quaint streets of downtown Orange, you’ll find the newest craft brewery open for business even on the quietest night of the week.

Recently opened by the Speelman family, Iron Pipe Alewerks pays homage to the building’s roots as a silk mill with its architecture. Its industrial namesake is clear with the large smoke stack from the silk mill days extending behind the bar and acting as a centerpiece to the newly opened family owned and operated bar and wood-fired pizza spot.

After over three years creating a variety of beers as homebrewers, father and son team Steven and Zach decided to open up the brewery with help from all of the family, including brothers, Zach’s fiancee, and his mother.

“We are a close family. Everyone has their roles and so far have performed to perfection. I couldn’t be prouder,” says Steven of his family’s roles in the brewery.

While Steven and his son brewed in the garage for 3 years or more, devising a variety of beers and garnishing compliments from friends, Speelman admits, “These were our early taste testers. It’s easy to make beer but to get good feedback when you’re asking friends to judge your beers can sometimes can be challenging.”

It would seem their friends’ reviews on their beers were on-point, though. The local spot in a fairly tiny town, while not hidden away, but still not overly visible to quick drivers-by, is consistently hopping with families, groups of friends, and couples even after only opening a few weeks ago.

Speelman and his son had help from a well-known German-born brewer in the community who helped and gave them the tools to create their brews. Steven credits Zach with the knowledge and inspiration of putting together the recipes from the grain and sourcing the variety of hops.

“He is the mastermind behind the flavor profiles,” says Steven.

In terms of current production of all of those flavors, the brewery is currently operating a system producing both lagers and ales, primarily for pouring in the taproom, though growlers are available, and crowlers may be in the future.

“The goal was to have about 12-14 beers on tap at most times with 4-5 being staple beers and the others rotating in out as the seasons change and the taste alter due to weather,” says Speelman.

In terms of brewing philosophy, Speelman has a simple, small batch approach.

“Smaller batches bring out better flavors – we wanted to be smaller so we could turn over beers and introduce locals to what craft beer has to offer in flavor and variety. There are just so many flavors out there we have tried but yet have not brewed. We want to make great beers foremost but I believe as a owner it is our responsibility to teach others about beer, its flavors, and how the grains mixed with the hops can produce magnificent taste.”

Since Iron Pipe Alewerks is new, they have not collaborated yet with any of the other breweries in the area but they have been in discussions about work together. Meanwhile they are currently working with local food establishments to develop a food pairing with their beers as part of their menus and promotions, particularly with the Inn at Willow Grove, another local establishment who is dedicated to the preservation of the area and building the local economy.