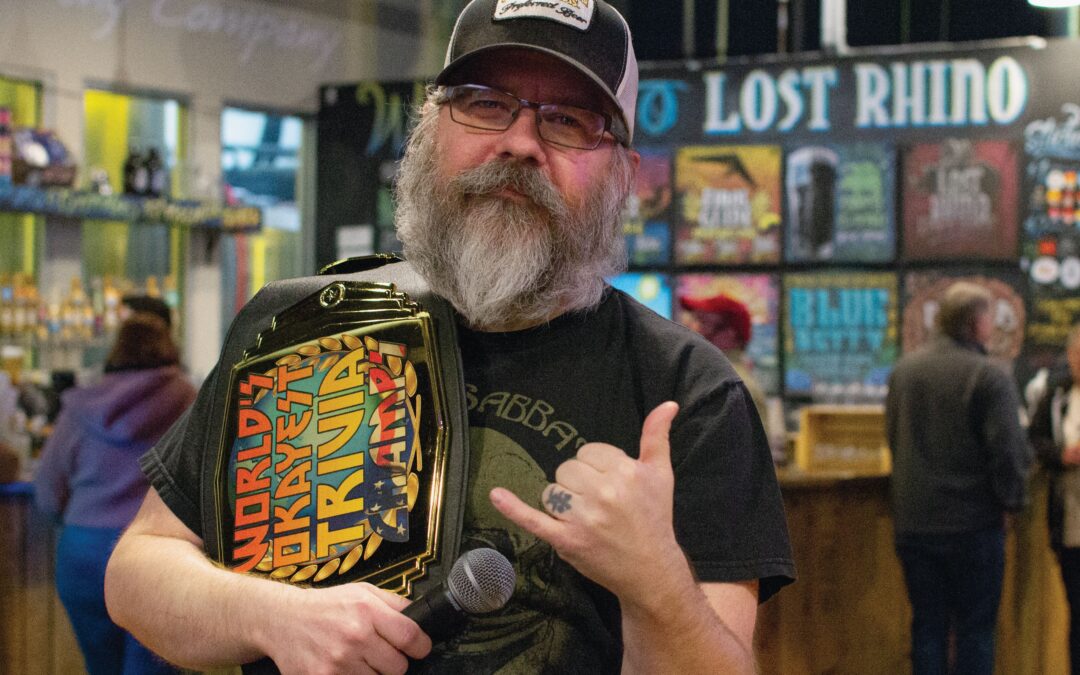 So it struck Chris Drummond one day while running The Art of Music memorabilia store at The Mirage casino in Las Vegas that he knows a whole lot of random facts about a whole lot of different things, and while his impressive collection of “useless knowledge” actually did prove helpful in selling memorabilia, he didn’t really see it paving a path to big bags of cash.

Chris grew up in Strasburg, VA and after moving back to NoVa he befriended Matt Hagermann, CEO and founder of Ashburn’s Lost Rhino Brewing Company.  Chris had experience in sales and became a sales rep for Lost Rhino, a position that over time morphed into handling entertainment and becoming a VP of operations.  Four to five years layer Chris moved on to manage the taproom at House 6 Brewing Company, also in Ashburn, but he maintained a good relationship with the folks at Lost Rhino.

Being a startup, House 6 didn’t exactly have a robust entertainment budget, so Chris, while brainstorming possible fun activities within the realm of possibility, suddenly thought — trivia.  What is trivia if not useless knowledge weaponized and monetized.  And so he found himself researching the ins-and-outs of holding successful trivia nights events.  Already having video editing experience and having purchased a small PA system, it was time to throw some trivia against the wall and see if it would stick.  It didn’t stick so great in the beginning, with early gigs at places like Bear Chase Brewing Company in Bluemont only seeing two or three teams participate.

But Chris stuck with it, improved the product, and got better.  He kept doing trivia nights at House 6 and added gigs at Lake Anne Brew House in Reston and at Lost Rhino.  At some point along the way to working trivia night gigs five days a week, Chris suddenly realized trivia had become his primary job and he decided to embrace that.

The name of the new endeavor?  World’s Okayest Trivia – a riff on shirts with taglines such as “World’s Okayest Dad,” which he had always found amusing due to their self-deprecating nature.  It was amusing to learn that some participants didn’t quite get the joke and would come up and tell him that his trivia is actually really, really good, honestly concerned about his self-confidence.  They needed not worry because as his trivia nights grew from a few teams (each being up to eight people) to 10 to 15 teams, and once even 35 teams, Chris knew he was putting out good product and that, as he tells me.

“It was very validating to see this kernel of an ideal grow into something where people seek you out and want to make what you are doing part of their weekly schedule,” he said.

During the pandemic he did do some Facebook livestream trivia events and used such events to talk up NoVa breweries he had been working with in hopes of sending some business their way for breweries doing to go sales.

Chris’ trivia nights can be themed, such as a Star Wars trivia night he did. Generally the trivia is varied and wide ranging, from pop culture to science to history to sports.

When I ask if he applied to be on Jeopardy he says no but mentions that at least two participants in his past trivia events had actually appeared on Jeopardy.  He mentions he has no plans to “franchise” his trivia operation as he doesn’t want a management type job, but does mention a new subscription concept he intends to launch later in the year called The Quizfather which will involve him providing plug and play content to allow others to put on trivia events.  Otherwise you can continue to find him at places including Bear Chase Brewing Co (Tue), House 6 (Wed), Lost Rhino and Old Ox Brewery Middleburg (Thu) and Old Ox Brewery Ashburn (Fri).  And if you win you will get to hold a championship belt over your head that is no joke.  Useless knowledge, my ass.