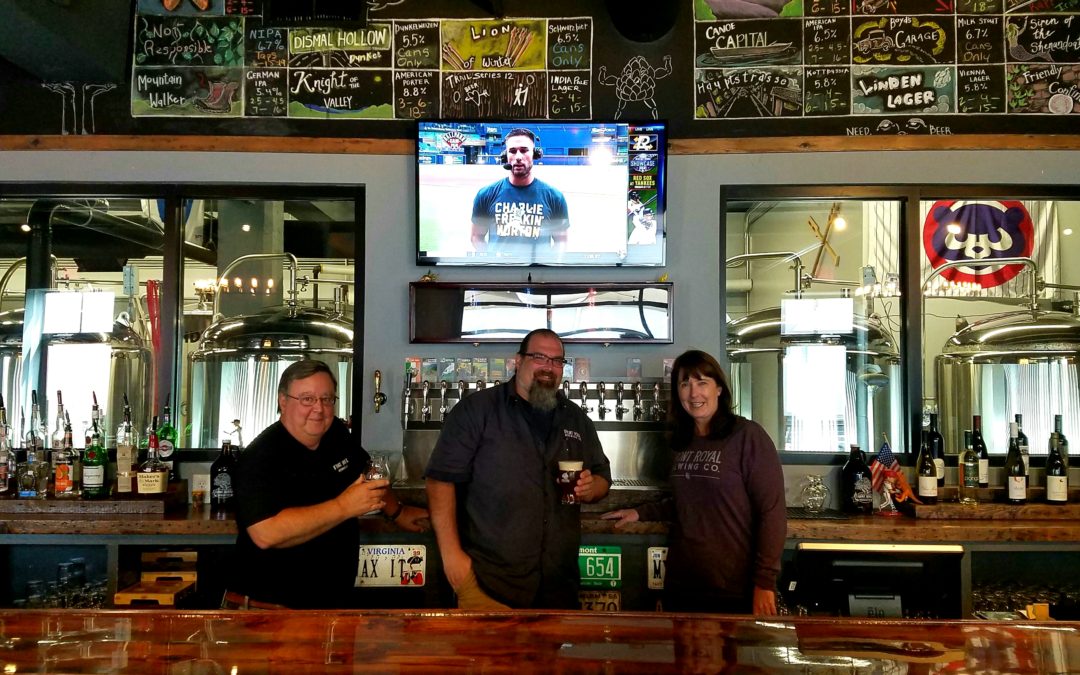 His name is Welcome.

No, really, Jerry Welcome, and the president and co-owner of Front Royal Brewing Company lives up to his name.

Welcome exudes a great combination of friendly optimism with the air-of-a-man used to working with people and getting things done.

Welcome extends his good intentions via the way station the brewery established for hikers taking a break from their expedition along the Appalachian Trail (Front Royal is roughly halfway along the trail which extends 2,200 miles from Springer Mountain in Georgia to Mount Katahdin in Maine). Hikers can shower, wash clothes, store stuff in lockers, and get good food and beer.

Jerry noted a lot of hikers decided to take advantage of the service (and the TVs above the bar) during the recent Women’s World Cup.

So, how was Front Royal Brewing Company conceived? Jerry’s son, Andrew, worked in the restaurant business. When he became involved with homebrewing the connection to the business of brewing beer was born.

Andrew Welcome met Tim Arndt (President of the Shenandoah Valley Homebrewers Guild from 2012-2017 and a certified Beer Judge and Cicerone) and then to his father.

While helping Pave Mint Smokin’ Taphouse open, with Jerry providing carpentry work and Tim helping to put in tap lines, the two began to talk seriously about opening a brewery together in Front Royal. They looked at potential spaces, but found the early options too cost prohibitive.

Enter Kerry Barnhart, a woman with a background in consulting, managing large staff, and strategic planning. Kerry had retired from working with companies like Aetna and had launched a commercial landlord company and gotten involved in the Main Street revitalization project and in doing so had helped win an award from the American Institute of Architecture. And a certain building is at the heart of that – Boyd’s Garage.

Built in the 1920s, the Boyd’s building was once home to the fanciest cars around and at various times served as a pool hall, a furniture store, and an auction house.

Kerry decided she liked the ideal of a brewery taking up residence in at least part of the building, and in April of 2017 a lease was signed and so began the arduous transformation of Boyd’s Garage into Front Royal Brewing Company.

The brewery tasting room retained some really cool details like license plates from 1917-19 embedded in the ceiling of the main bar. With entrances from both Main Street and the parking lots on Peyton Street, the brewery surprises with its spaciousness, including a main bar with space for bands to play, a full restaurant dining area, and multiple outside seating areas.

As for the beer-making, Tim Arndt brews on a 10-barrel system, which includes a 3-barrel brewhouse, six 10-barrel fermenters, a 10-barrel bright tank, and six 7.5-barrel serving tanks. All the tanks are named after 1980s pop culture references such as Andre (the Giant) and R2D2. The brewery has its own canning machines and primarily cans its flagship beers for on-site sales.

Front Royal didn’t need any more reasons to be worth a visit, but how great that the town can now boast an award-winning brewery with great atmosphere in a cool space that regularly host live music and delicious food.