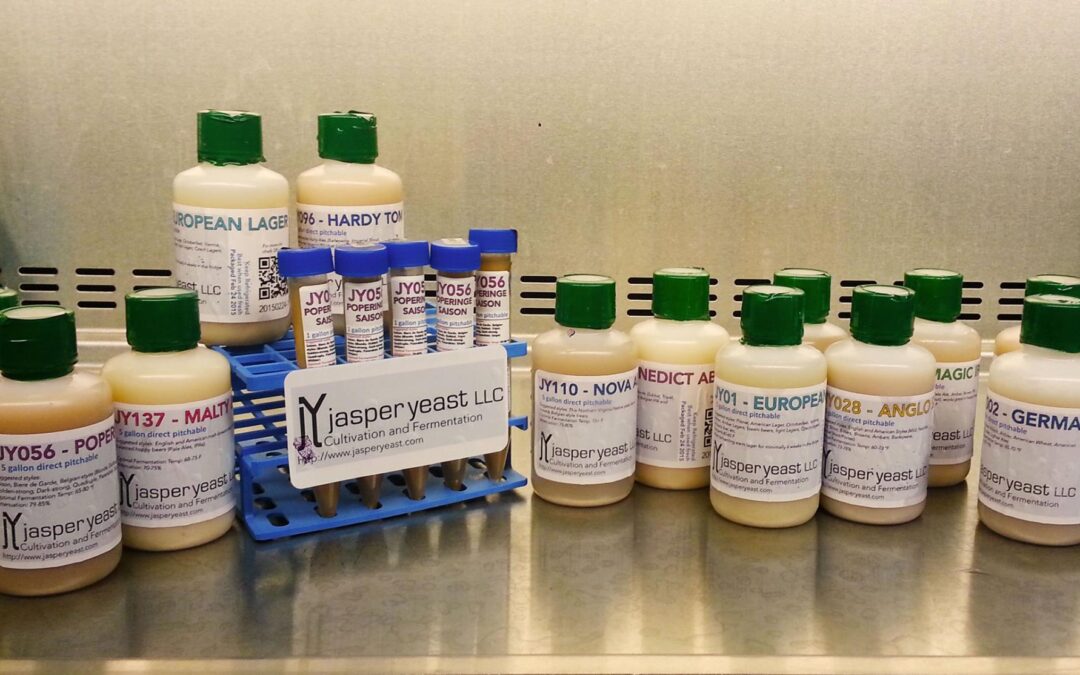 (Yeast is an essential ingredient to create unique flavors in beer. Photo courtesy of Jasper Yeast.)

As winter starts giving away to spring, the brewers at Pen Druid get ready to make beer the old-fashioned way.

By old fashion, they mean centuries, not years.

Like the Belgium monks who perfected brewing back in the 14th century, the brothers who founded Pen Druid create special batches using spontaneous fermentation, which relies on airborne yeast to swoop into their unfermented wort and turn its sugars into alcohol.

Pen Druid is one of several Virginia breweries that are producing their own yeast – either by cultivating and preserving it or collecting it from the wild with each batch. The process fulfills a goal of creating a completely local product and putting a signature stamp on their beer that no other brewer can replicate.

“Food products traditionally — especially fermented products like beer and wine — are an expression of their time and place,” said Lain Carney, who led the effort to capture the yeast in 2015 before Pen Druid opened. “For us, making a traditional fermented malt beverage, it’s a no brainer to cultivate the wild yeast here that is healthy and happy.”

Beer is a simple beverage made up four ingredients: water, malt, hops, and yeast. Yeast is the most essential – without it, the beer does not become an alcoholic beverage – but it is often overlooked by American brewers, who largely have focused on hops to flavor their beers.

“For all of the emphasis on hops, brewers are missing that yeast can introduce unique flavors to beer,” said Jasper Akerboom, a microbiologist who created his own strain of yeast to brew at home more than a decade ago and today owns Jasper Yeast. “There’s something unique you can create with your own yeast. There are certain flavors that you don’t know that are out there.”

About 10 years ago, while still a homebrewer, Akerboom collaborated with Lost Rhino to brew Native Son, a beer with 100 percent Virginia ingredients. His yeast gave the blond ale a “nice, hard candy flavor” to the beer, he said. After working for Lost Rhino for several years, now he runs an Ashburn company that cultivates and preserves yeast strains for breweries.

In addition to the late winter through spring wild fermentation season, Pen Druid brews a range of Belgium style ales with a yeast that Lain Carney cultivated back in 2015.

The Veil Brewing has an active spontaneous brewing operation that produces a variety of lagers, ales, and goses in its Richmond and Norfolk locations.

Wheatland Spring Farm + Brewery has cultivated a strain of yeast on their Loudoun farm and last year won second place medals for their pale ale and pilsner from the Virginia Craft Beer Association.

How To Do It

Yeast spores are living organisms and, like all organisms, they’re hungry. They have a sweet tooth and are attracted to sugars and starches in the natural environment, whether is the dough mixture in a baker’s kitchen or unfermented beer left out overnight on a farm.

During the 12-hour marathon wild fermentation process at Pen Druid brewery, Jennings Carney and his team pours 300 gallons of unfermented beer in a coolship – a raised platform bordered by short walls. They leave it out overnight for the natural yeast on their farm brewery to feast upon.

Once the local yeasts are actively eating the beer, the brewers transfer the liquid to barrels for additional fermenting over the next 12 to 18 months.

Jennings said they have experimented with wild fermentation at other times of year and have found that the best window for brewing is late February through April. That’s when the temperatures on the farm just east of the Shenandoah Mountains are similar to the winter months in Belgium, which is when the Lambic brewers do their wild fermenting to this day.

Capturing and cultivating a yeast strand is like a science experiment, Akerboom says. You need to keep good notes, try several approaches, and learn to live with failure.

“It’s pure trial and error,” he said. “The beauty of it is you’re being guided by something that’s being given to you, and it’s not something you can control.”

That lack of control includes not being able to predict the flavor notes in the final product. Yeasts developed in controlled environments provide consistent flavors from batch to batch. The wild-caught yeasts evolve over time and that can change the taste of the beer.

The lack of consistency is one reason that brewers shy away from locally created yeast and rely on commercial products. Another reason is the effort required to collect and preserve unique yeast strains.

To cultivate the strain that Pen Druid uses for traditional brewing, Lain Carney estimates that he tried 60 different times to find the right one. He eventually homed in on two strands that had the tasting notes for the type of Belgium ale he and his brothers wanted to produce.

“I just started feeding them wort,” he said. “Whatever was the dominate fermentative agent just took over and left the less vigorous yeast behind.”

He eventually settled on the one yeast that created the beer he liked the best. The brewery continues to use it today.

In the early days of brewing with it, Pen Druid lost a few batches of beer because the yeast didn’t perform well. Now, the yeast rarely lets them down.

“It’s six years old, and there’s not a lot that it does that surprises anyone anymore,” Lain said.

“When I approached yeast wrangling with a sourdough bread approach – follow your nose, follow your taste – I ended up with a very vigorous, very tasty yeast,” he said.

And it’s a flavor that no other brewer can replicate.

His brother Jennings said that his favorite feedback is from people who have tasted beer from all over the world.

“The best thing I’ve heard back from them is that it doesn’t take like a Belgium beer; it tastes like our own thing,” he said. “We want to create something that speaks to where we’re from and who we are.”

David J. Hoff is a writer and former home brewer who lives in Arlington.