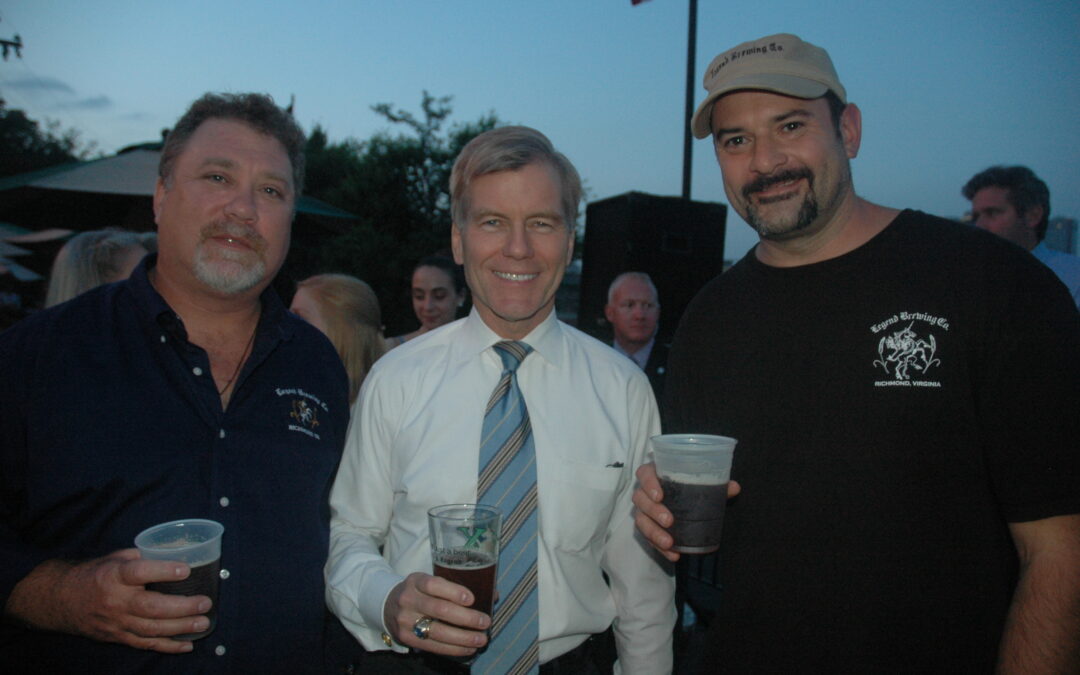 (Then Governor Bob McDonnell was a champion of craft beer in Virginia. Pictured here at Legend Brewing Co in 2013)

Not so long ago, breweries located in the Commonwealth of Virginia, by law, had to operate as either exclusively as a manufacturing facility or as a brewpub with a full-service kitchen.  There were other restrictions as well.

“For those of us who started pre-SB604, zoning codes required manufacturers without a restaurant to be in an industrial area,” said Bill Spence, founder of St. George Brewing Company in Hampton.  “Off-premise sales were limited to kegs and package beer.  Facilities were designed for manufacturing and little for public use.”

On May 15, 2012, then-Governor Bob McDonnell changed that when he signed SB604 into law. The bill was sponsored by State Senator Jeffrey McWaters of Virginia Beach.  Senator Bill Stanley, who still serves in the General Assembly representing Senate District 20, was the co-patron.

The United States was in an economic crisis in 2008-09. The housing bubble burst and financial institutions were severely impacted.

Climbing slowly out of what was described at the time as the “most serious financial crisis since the Great Depression,” Virginia politicians along with Brett Vassey, CEO of the Virginia Manufactures Association, and members of the newly formed Virginia Craft Brewers Guild put together a convincing plan to allow breweries to operate with similar privileges the Commonwealth’s wine industry enjoyed. The projected economic benefits were convincing, stating the bill would keep Virginia on pace with neighboring states; an acknowledgement that breweries were an emerging manufacturing base and would create jobs; the generation of excise taxes for the Commonwealth; expansion of tourism and the economic impact providing heads-in-beds for hotels and increased restaurant business.

Another guiding appeal in gaining approval for SB604 was this: Craft Breweries are independently owned and operated with locations in almost every congressional district in the state.  During one of the most challenging economic times in our lifetime, the craft brewery industry has managed to post double digit growth.  This growth of small business is at the heart of economic vitality across the nation and the state.

SB604 was paired with House Bill 359, sponsored by McClellan, that allowed manufactures to lease space in their brewhouses to smaller-scale brewers.

“This legislation positions Virginia’s craft brewers to grow and create more jobs in the Commonwealth,” said McDonnell during the signing ceremony. “From Arlington to Abingdon, entrepreneurial Virginians are innovating and brewing critically acclaimed beers. The legislation signed today will make it easier for our breweries to serve as destinations for potential customers and allow some of our talented small-scale brewers to lease space from established brewers and overcome some of the significant start-up costs.”

It should be noted the breweries who spent money and time helping to lobby the General Assembly for the passage of SB604 were, in effect, brining the potential for more competition. The viewpoint at the time was “a rising tide lifts all boats,” though they could not have foreseen the tidal wave of new brewery openings that followed.

“At Starr Hill, one of the most impactful results of SB604 on our business was the challenge of increased high-quality competition in the marketplace locally,” said Josh Cromwell, Vice President, Starr Hill Brewery. “As a legacy brewer and champion of the bill in 2012, we also created an environment that required innovation and attention quality within our own walls. We’re proud of the quality evolution of our brewery over the last 10 years. It was a necessity to survive in our industry with so many new and first-class brewers that entered the Virginia beer scene.”

The passing of SB604 had an impact on Smartmouth Brewing Company’s plans.

We were in the unique position of having written our business plan based just on sales through distribution and then having SB604 pass while we were under construction,” said Porter Hardy, Smartmouth’s president. Hardy is also the current Co-Chair of the Virginia Craft Brewers Guild.  “So, we had to totally revise our plan prior to opening.  It was great, though.  We were able to reach so many more people and reach them in a more direct way by serving people directly.  Also, being able to sell pints directly to customers helped our bottom line as we were trying to get off the ground and allowed us to invest in more people/jobs.”

“We actually opened in December 2012, so Champion was able to build its business model around the ability to sell pints, which was a significant improvement over the tastings and growler fills in the original business plan,” said Smith.

Beer tourism quickly became reality when the Brew Ridge Trail debuted in 2012, linking the handful of breweries along Route 151.

“Nelson County is the home of Virginia’s original beer trail,” said Maureen Kelley. The trail has continued to grow and change with the industry. SB 604 was a game changer for the industries and has allowed these businesses in Nelson to thrive. As a destination marketing organization, we have seen the number of visitors continue to grow and the craft beer lover change to a broader audience.”

“This is huge for us with our location a half mile off the highway on the way to the OBX,” said Aaron Childers, a co-owner of Big Ugly.  “We have customers who stop in each year on their way to and/or from their annual vacation.”

Smartmouth operates its original brewery in Norfolk and a satellite location — The Pilot House — at the Virginia Beach Oceanfront.

“Our location in Virginia Beach definitely is impacted by tourist traffic in the summers,” shared Hardy.  “We also get people year-round who are coming to the Virginia Beach Convention Center or now the Sports Center.  Our Norfolk location does get a fair number of people on brewery tours to our area, but they are more spread out through the year.”

With all the innovations and evolutions resulting from SB604’s passage 10 years ago, the craft beer industry continues to sail through uncharted territory.

As for final thoughts, we have these from Virginia’s craft beer makers:

Champion’s Hunter Smith: “I’m proud to continue to serve on the VABG Leadership Board, as I believe we all owe a debt of gratitude for the Guild and the leaders that have come before and have set the stage for the success we have today. I also think there are lots of exciting things to come.”

Josh Cromwell of Starr Hill: “While Starr Hill began as a brewpub and music hall, we turned completely to a packaging brewery exclusively once we moved to our current facility in 2007. In a twist of fate, SB604 helped us return to our foundation by renovating our on premise tap room in Crozet while expanding satellite locations across the state over the last 5 years.”

St. George’s Bill Spence: “With all the post-SB604 producers, the landscape has become pretty crowded and forcing everyone to make better beer to stay competitive.  Also, the concept of ‘Buy local’ and drink local becomes important to the consumer.  Many of us seem to be chasing the latest fad beverage or just want to be the local Cheers establishment.  Another factor is the ones who had deep pockets to make lavish changes while many struggled to stay in business.  St George is one of the unique ones where the production floor becomes the social area after hours where the patron is up close with the equipment.”

And a final word from Porter Hardy of Smartmouth: “SB604 was a monumental event for breweries in Virginia and really for the entire economy of Virginia.  Owning a brewery is much more viable because of SB604 and we have seen the creation of hundreds of local jobs related to that and, I hope, we’ve made our communities a better and more fun place to live.”