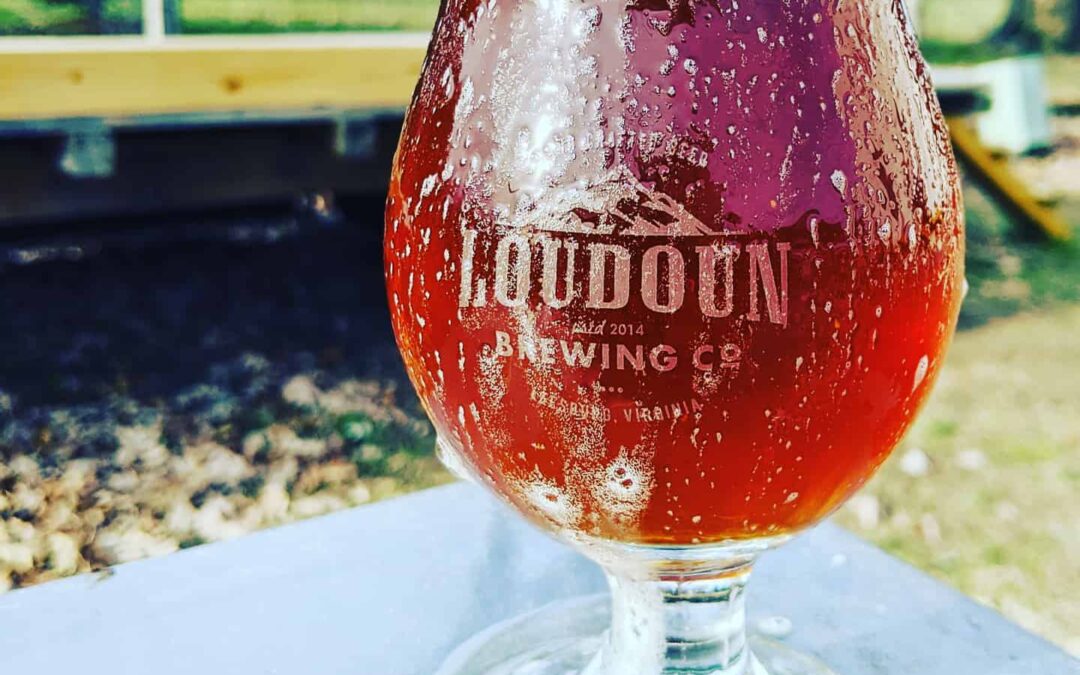 (A delicious beer to go with any food item. Photo courtesy of Loudoun Brewing Company.)

Despite very limited experience as a brewer, Fust and his then-fiancé Shannon took over Loudoun Brewing Company on St. Patrick’s Day in 2017. His sister Linda would join them shortly after.

“I was planning a brewery, more like the farm brewery model,” Fust explains. “At the time, B Chord Brewing Company was getting pushback from all its neighbors, so we hit the pause button. I then volunteered to help with the newly opened Loudoun Brewing Company. Three months or so later, I was doing all the brewing. I had made a couple of batches of beer with friends and their home brewing kits. I started gathering parts and buying stuff off the internet.”

The whole  quick progression — from building decks at the brewery, to brewing the beer, to owning the operation – seems almost normal to Fust. “I had planned to be a chef when I was young, so I guess, in some ways, I am. After all, beer is food. Food is brewed. I had cooked for a long, long time. It helped a lot, knowing time, temperature and materials and ingredients. I transferred all that into learning — very mechanically — how to brew beer. Now I have several years of brewing behind me and hundreds and hundreds of batches brewed.”

The hundreds of regulars at Loudoun Brewing Company are grateful for Fust’s career change. Located at the crest of Leesburg, where East Market Street splits Mom’s Apple Pie Bakery and the regal George Marshall International Center, the brewery is a welcoming place with a wide assortment of beers. Several new beers pop up on the menu every week thanks to Fust’s 300-plus  book of recipes.

Last year Loudoun Brewing jumped to a four-barrel brewing system without skipping a beat. It has perfected its Charisma wine beer, a 10 percent alcohol that tastes much smoother than most higher octane beers. “It is the largest infusion of juice we’ve done so 15 percent of the fermentable is grape juice,” says Fust, who is enthusiastically surprised by his latest batch. “You think you know what is going to happen and it turns out better than you thought!” The brewery is also synonymous with the United Soccer League’s local professional team, Loudoun United,  thanks to the fabulous Unified golden ale beer. The beer sells out at Loudoun brewing almost as fast as it is made.

Fust credits his success to both customers and his family. “We talk beer enough with our customers that we often collaborate with them. Our most awesome blueberry Saison happened like that. Stefan Ahalt has a blueberry tree! That is also how the crab apple beer concept landed: Mercy and Greg Kelly found the crab apples, which are tough to find.”

Despite all of his recipes with unusual ingredients, Fust says he has buried only one beer recipe that didn’t work. “The acorn bourbon barrel porter will not return. Ever!  Way too much effort in acorns. They were boiled and roasted. I will probably never do that beer again. We have some fan favorites that we try to repeat, but it’s never guaranteed.”

Fust, who was born in Fayetteville, North Carolina, says his father’s military career meant moving every few years, mostly along the Mid-Atlantic. In many ways, Fust says, the nomadic childhood prepared him for the hospitality industry. “You learn to make friends, or you have none. The social part of the beer industry falls right into my lap. I want everyone that comes in to be my friend. I like to have fun.”

The brewery is clearly a family affair, Fust says. “My lovely wife Shannon is both owner and a supporter of the craft beer industry. She is inspirational and supportive. Linda Callagy, my sister, works almost daily. I could not do what I do without both of them. Our niece Allison Doiron and nephew Jude Doiron currently pour beer for us. Shannon’s sister Kellie Gearhart has done the art for many of our labels as has Alaina Doiron. My nephew Jordan Fust did the label for Oh My Darlin Clementine IPA. We plan to have a batch soon for Christmas time.”

Fust also gives credit his competitors, which he calls collaborators. “There’s a great community of beer around here, everyone has done a lot to help us out, Black Hoof, Ocelot, we partnered with Walsh Wine.” He also gives props to Barnhouse Brewery.

Outside of the Loudon brewery, Fust is a local hero to many who oppose the lengthy overreaching regulatory arms of the Town of Leesburg. Early on, Fust went to bat for food trucks who battled with the town over permitting. “It took nine months for the town to figure out that trucks need permits and a safety code,” he says. When the town told Loudoun Brewing they couldn’t have a permanent outdoor stage, Fust acquired a hay wagon for $400 that is now a non-permanent “mobile” stage/bandwagon.   “You have to think on your feet,” he says. “We were initially arguing over parking spaces in the time of Lyft and Covid!

I found out if you have a high top table, it just doesn’t require any parking spaces!” His latest discussions with the town also seem puzzling. “We got a permit to put up a tent, but you are not allowed to put sides up! What the hell does that do? If I put some heaters in, I might as well heat the whole town.”

It would be easy to discount Fust as a curmudgeon but his repeated charitable acts speak louder than words. One event, Kegs for Eggs, raised $5,000 for ovarian cancer treatment and awareness. He also has been the licensee for massive street parties and provided deeply discounted beer at countless charities. While the Covid outbreak has temporarily postpone multiple airport soirees, garden festivals and other charity events, Loudoun Brewing is working to provide discount beer at other upcoming events and with the neighboring George C. Marshall International Center. When asked about his charity work, Fust has a simple explanation: “By being friendly, people learn of the brewery.”