Blue Bee Cider Falls Far from the Tree in RVA 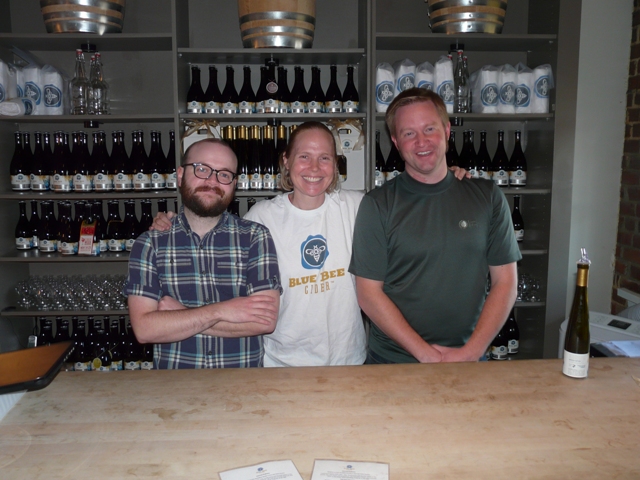 Words and Photos by Steve Deason

Have you ever tasted a smoked cider?   Smoked beers are quite common but it’s unlikely that you have heard of smoked cider.   If you want to be on the “cutting edge” you had better hurry!   The creative (and hardworking) folks at Blue Bee Cider smoked one small batch of Winesap apples after another for three days in late 2014 using a blend of wood that included hickory and apple.   These apples were then fermented to produce approximately fifty gallons of a very unique cider called Orchard Potluck: Smoked Winesap.   The folks at Blue Bee say they plan to release “Smokey” on tap around February.

Such creative craft cider may be relatively new to Virginia but cider consumption isn’t.   The earliest settlers from Europe brought with them a tradition of making and drinking fermented apple juice they called cider.  Luckily they knew how to grow apple trees too, as only crab apples were native to the U.S.    Orchards were planted throughout Virginia to support this home crafted product but many were later burned or cut down.  It is unclear how much destruction was due to prohibition and how much was due to a period where chopping down your orchard was a sign of piety.  Many of the Virginia apple orchards now producing were started by soldiers returning from World War II, with help from the GI Bill.  At some point the term cider changed in the U.S. and Canada to include juice that was not fermented.    Therefore fermented apple juice in the U.S.  is now often referred to as hard cider or apple wine.

Virginia commercial apple production now ranks sixth among the U.S. States according to the USDA.  Washington State is ranked first and produces approximately seventy percent of the U.S. production.    According to virginiaapples.org, “An average of 5-6 million bushels of apples is produced annually by Virginia growers.”   The mountain region of Virginia provides a cool climate that apples prefer.  This is where you will find most orchards and cider makers.   Courtney Mailey was well aware of this when she opened  Blue Bee Cider as Virginia’s first and only urban cidery in late 2013.  Blue Bee Cider is located in the Manchester area of Richmond near Legend Brewery.  The name for Blue Bee comes from the wild and native Virginia “blue orchard bees” which are more efficient than honeybees at pollinating apple blossoms.

Before opening Blue Bee Cider, Mailey was an Economic Development Professional despite a career assessment suggesting her best fit was as a farmer.   She had enjoyed previous jobs that gave her a chance to be outside and ultimately the dislike of being inside all the time motivated her to explore a change.   She knew she wanted to do something with agriculture but she had neither land nor skills.  Mailey discussed winemaking with an uncle who has a winery in Washington but after further research realized craft cider was an “untapped” market in Virginia despite the local apple production.   Mailey studied cider making at Cornell University and then apprenticed at Albemarle CiderWorks.

Brian Ahnmark, whose title at Blue Bee is Cider Evangelist (sales / marketing), recalls they sold out of their production of Aragon 1904 in 750ml bottles in less than three months after opening.   When they offered customers the 500ml size instead, customers would often respond that they would just come back later for the bigger size.   The tasting room staff would then have to explain that they may be waiting a long time.   The vast majority of cider apples are at their peak when harvested.  Blue Bee receives and presses apples primarily from August to November.     They use just a few varieties of apples that peak after holding such as the Arkansas Black which Blue Bee presses in March or April.   Mailey explains that “some batches are larger than others, so they last longer but we only make each product once during the year.”   Blue Bee uses rare and heirloom apples primarily from Virginia orchards.   Mailey has experienced other cider makers lose their critical supply due to a bad harvest.   To avoid such a plight, she is creating new ciders to expand the varieties of apples she uses and establishing relations with new suppliers outside of Virginia.

The biggest surprise for Mailey has been “just how much cider Richmond wants out of us.  I had a five year plan and I expected to be producing and selling at the end of five years what we are producing and selling now.”   Ahnmark shared that this success has allowed the team to create a “small batch series now, I figured that would be like a year three to four initiative that we are now producing in the middle of year two.”  Blue Bee has a Cider Club with benefits similar to clubs at many wineries.  Members get four shipments of cider a year, free tastings at Blue Bee, invites to pre-release parties, Cider Club glasses, and special discounts.   Ahnmark says one of the great things about the Blue Bee Cider Club is “members get early access to the limited stuff and sometimes exclusive access to such ciders as their barrel aged batches.”   A recent exclusive addition to the Cider Club benefits is a small to go “growler”.    Selling cider by the keg (and growler) became legal in Virginia for all cider producers in 2014 due to a bill submitted by State Delegate Betsy Carr at Mailey’s request.

Currently Blue Bee Cider offers eight bottled ciders plus the micro-batches that are sold at the cidery or on tap at other locations.  Mailey refers to their Charred Ordinary as the “most challenging cider of their bottled products.”    It’s a little sour and very dry with only .5% residual sugar.   She says “it’s one of the ciders we make the most of because there is a market for it especially in Richmond where …. there is already a desire for sour beers”.    Another cider that might catch the eye of a craft beer drinker is Hopsap Shandy which is the first hopped cider produced commercially in Virginia.  Mailey dry hopped Hopsap Shandy with Cascade and Citra hops to accent and balance the grapefruit like tastes in Winesap Apples.   Ahnmark cautions “most people’s experience with hops is bittering from an IPA.  This (Hopsap Shandy) is not bitter, it’s actually very citrusy.”   During the summer of 2014 the Blue Bee team foraged two hundred pounds of wild black and white mulberries in Richmond to produce Fanfare.   This  rose’ cider blend with Stayman, Pink Lady and Gold Rush apples was featured at their one year anniversary celebration.

Mailey and her Assistant Cidermaker Manual Garcia have produced several collaborations recently with Richmond breweries.   Because these products are technically a malt beverage, the collaborations can only be sold by the breweries.  Michael Isley owner of Isley Brewing Company says he and Mailey had been talking about collaborating since they first met at an “end of prohibition” party in 2013.   Late in 2014 Josh Stamp, Head Brewer at Isley Brewing, set out to produce a beer that tasted similar to apple pie.  Mailey suggested the juice of Gold Rush apples to provide the desired sweetness.  Stamp added this juice to his brew both before and after fermentation.  The resulting Apple Brown Betty English Brown Ale also has a taste of cinnamon.   Mailey supplied the name for the collaboration and Isley points out she also provided the name for their most popular beer, Choosey Mother Peanut Butter Oatmeal Porter.

Nick Walthall, brewer at Hardywood Park Craft Brewery said “Garcia and I had been talking awhile about some sort of collaboration… I didn’t just want to blend cider with our (current beers) I wanted to make it something special. “ In November Walthall decided to build the collaboration on a Saison Hardywood Park had brewed in August using Brettanomyces yeast in the second fermentation.  Brettanomyces is often used in Belgian Style beers to add complexity and sourness.   Walthall, a lover of funky ciders from the Basque region, blended unpasteurized and unfiltered juice from Blue Bee Cider into the Saison and started a third fermentation in white wine barrels.  Walthall plans to bottle the beer in early 2015.  Perhaps the heirloom apple trees the Blue Bee team gifted to Hardywood Park to mark this first collaboration will be in bloom by release time.

Blue Bee Cider partners with Scott and Becky Harris, owners of Catoctin Creek Distilling in Purcellville, Virginia, to produce their desert ciders.   Each year the first five hundred gallons of cider Blue Bee produces is shipped to Catoctin Creek.   Scott Harris says “… after distilling they end up with about sixty gallons of almost pure alcohol which is split between the two companies fifty/fifty.”    Blue Bee ages the distilled product for eight months and then uses it to fortify their desert ciders to their legal maximum of 18%.  Catoctin Creek ages their share of the cider to produce apple brandy.   The first offering of their Quarter Branch Virginia Apple Brandy should be in early February according to Harris.   Due to this partnership, Harris mentioned they provided Blue Bee with some coveted Peach Brandy barrels that Blue Bee used to produce Rocky Ridge Reserve in late 2014.

Mailey reveals “eighty percent of our visitors have never been here before.  The vast majority has never had craft cider before.”    What most people have experienced is mass produced cider which “bottoms out at 5% residual sugar and can go up as high as 12%.  We are not a sweet product when sweet is the expectation.   So people who work our tasting room have to be excellent story tellers and they have to be patient with people who have misconceptions about what we make.   Sweetest thing you’ll get from us, other than the desert products, is 2.5% to 3% residual sugar.”

Seems the lack of knowledge about craft cider versus mass produced cider also leads to some gender bias.  Mailey explains “There is a misconception that craft cider is a female-oriented beverage.  Our customers are 50/50 and the CrossFit guys who buy our ciders are about as manly as they come. If I had a dollar for every conversation with a man that began with, “I’m a beer guy, but my wife/girlfriend/mother/sister loves cider.” As if he shouldn’t be at a cidery just to learn and explore the beverage of choice for multiple generations of Virginia men.  At a national level, the gender breakdown of cider making is the same for beer and wine, about 85% male and 15% female.  Consumption is 50/50. As a female cider maker, I am still in the minority and I make some challenging ciders. Fellas, you do not have to apologize for liking something that I make! “