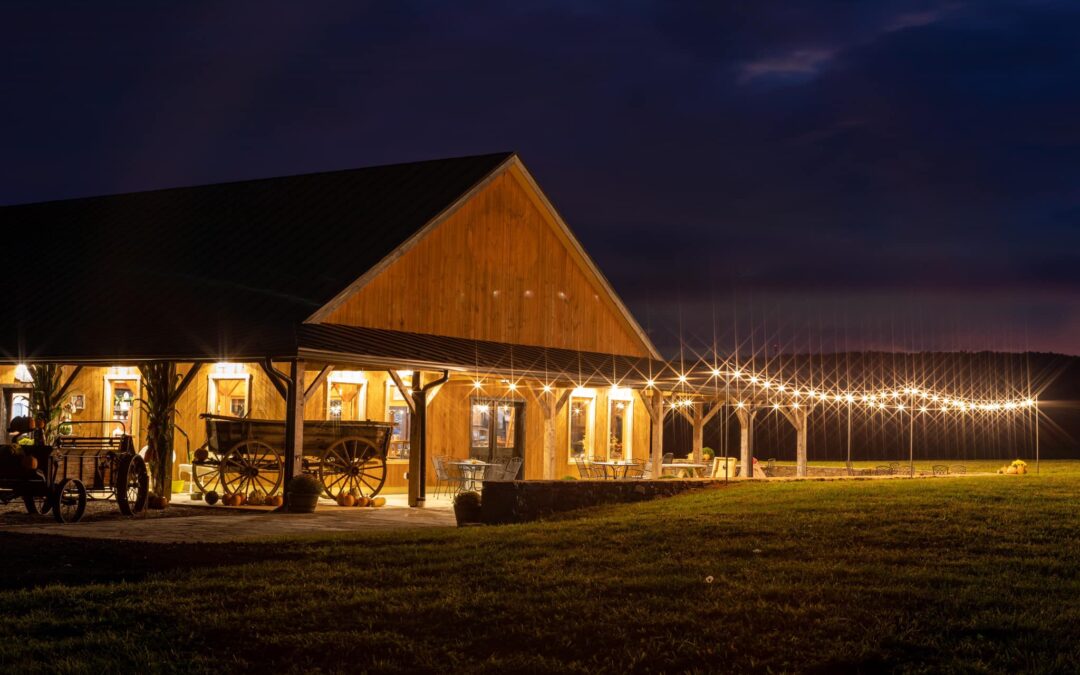 Mike and Katherine Virts are producing beer, wine and cider in Hillsboro, not too far from where his ancestors starting farming in the early 1700s.

In just a year, Harvest Gap Brewery has built a strong following on its sprawling farm brewery on State Route 9. To some longtime locals who still call it Virts, or Virts’s farm, it’s still just a country farm store but with beer. “We originally wanted the brewery name to be based around harvest because it is one of the most important times of the year for a farmer,” says Mike.  “We also wanted to incorporate our beautiful view of ‘The Gap’ in the Short Hill Mountains.  After weeks of contemplating the name, we came up with the combined name of Harvest Gap.”

Virts’ ancestors originally settled in nearby Waterford, Mike says.  “My parents, Dennis and Linda Virts, currently live on our family’s original Home Farm in Waterford.  This is a 350 acre beef cattle and crop farm still in operation today by my father Dennis.  Harvest Gap Brewery is located on Meadow Hill Farm in Hillsboro.  My grandfather, Donald Virts, purchased Meadow Hill Farm from radio legend Arthur Godfrey in 1972.  This is not only home to Harvest Gap Brewery but is a fully operational, 340 acre beef cattle and crop farm.  Meadow Hill is also home to my wife Katherine, myself and our three children.”

As recently as two years ago his father grew giant strawberries in the middle of winter thanks to a greenhouse and some space age hydroponics. The Family Farm Market closed in the winter of 2020 as a result of the Covid 19 pandemic but opened as Harvest Gap Brewery in September 2020. Today that same greenhouse is used for live music, special events or overflow when the weather is disagreeable.

The chill atmosphere at Harvest Gap flows along like Mike and Katherine, who are pleasant and easy-going but also watching every aspect of the brewery at all times. The decision to rent private fire pits raised some eyebrows in beer circles early on but has become popular among visitors and is now standard also at Lost Barrel Brewing in Middleburg. Mike says private pits are very popular. “We provide four complementary fire pits during the winter months to our customers.  We also rent private fire pits for families and small groups to enjoy in our open backyard space.  Fire pit rentals include one of our staff to light and refill your pit during your rental as well as complementary S’mores kits.  With the struggles of covid 19 and social distancing, the private fire pits were a huge success in providing our customers with outdoor seating during the winter months.” 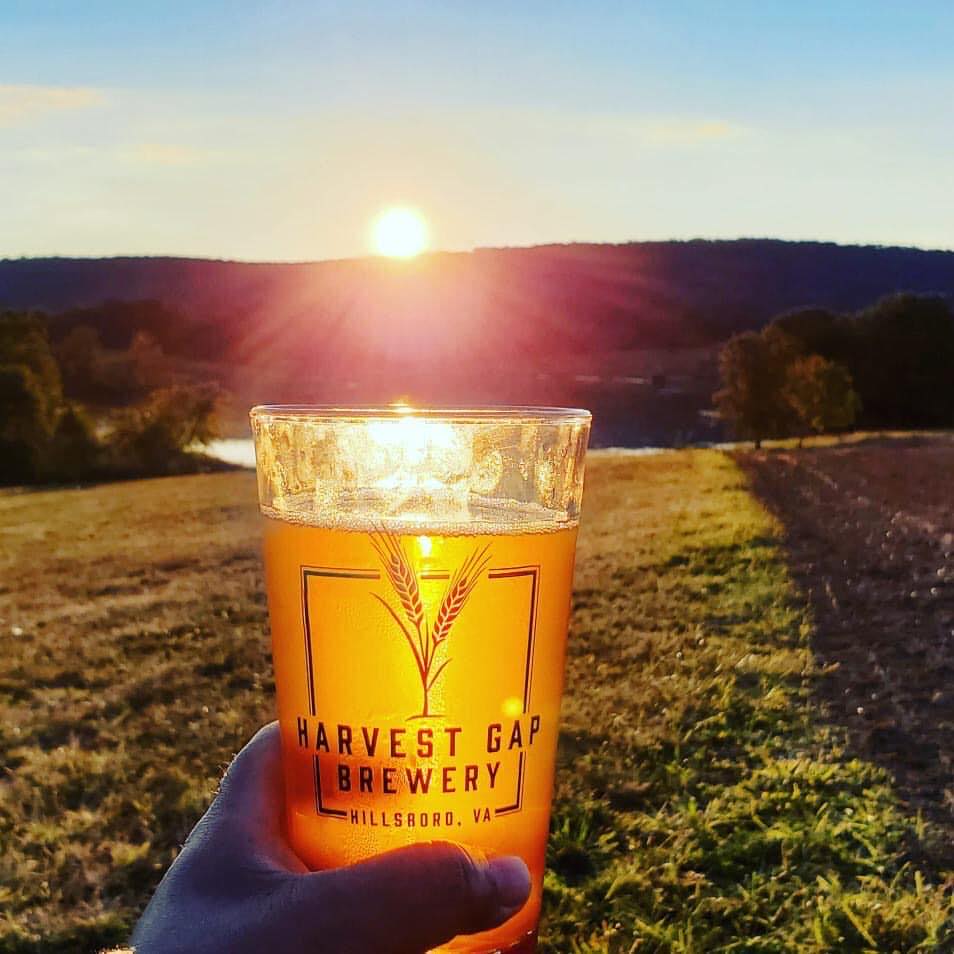 Virts, like most in his family, wears many hats.  “I served in the US Marine Corps from 2006-2010 at which time I served two tours in Iraq.  Upon completion of my duty in 2010, I moved in to Meadow Hill Farm and began building my beef cattle and crop farming business.”

Signs throughout the brewery honor the Marine Corps, including the beer. “My personal favorite beer is the Devil Dog which is a German Helles lager,” Mike explains.  “The name Devil Dog or ‘Teufel Hunden’ in German, was given to US Marines at the battle of Belleau Wood during World War I.  I decided to introduce a popular German beer to Harvest Gap’s tap room and name it ‘Devil Dog’ in recognition of the USMC and all of the Marines that came before us.”

With large crowds daily, Virts says he must expand to accommodate the traffic. “We are in the process of expanding our facility, adding a private event room as well as more bathrooms and additional kitchen space.  We are also constructing a 15 barrel brewhouse that we hope to have up and running by early fall.”

Virts is grateful for his success. “My wife and I have been very blessed to be able to open and operate our brewery during these hard times of a pandemic,” he says. “We have also been truly fortunate to have an extremely dedicated and committed staff.  Our team and all their countless efforts has made it possible to grow and build a business that is family oriented and customer friendly.  We had no idea how things were going to take off, especially opening as a new brewery in the middle of a pandemic.  We quickly realized we were going to need a larger brewhouse.”

Brewmaster William Jones of Culpepper has created a following with his interesting varieties of IPAs that include vanilla and mango, among others. Jones is not only brewing for Harvest Gap but finalizing the construction of the new 15 barrel brewhouse.

The wide variety of foods, snacks and entrees is a big draw for families. It still feels like an old time country farm thanks to the apple cider donuts, caramel popcorn, homemade root beer, cappuccino, and barbecue. For kids, there is plenty of room to ramble or take a slide down a pipe cannon or just shoot some hoops. Up ahead in the distance stands the Virts family farm with its iconic red barn and pond.

The addition of Harvest Gap Brewery to the State Route 9 corridor completes what may be Virginia’s best farm beer trail with a stop every 15 minutes. Most notable are the Notaviva brewery, vineyard, winery, cidery, and seltzer emporium; the Old 690 Brewery, one of Loudoun’s first breweries, and Wheatland Spring Farm and Brewery, which is on a mystical quest for growing and sourcing locally grown ingredients. If that weren’t enough, Belly Love in Purcellville and its sister brewery at Hillsborough Vineyards both add to this beer-rich environment. Finally, another 15 minutes toward the Potomac River just past Lovettsville, is Flying Ace, the largest farm brewery in Virginia. Cross the Potomac into Maryland (sacrilege) and try the fabled Smoketown Brewery, located in a haunted former fire station beneath a music venue frequented by Patsy Cline and many others (while they were alive). This may be a cluster but it is a real good one when it comes to beer.