Brewery Owners on the Run 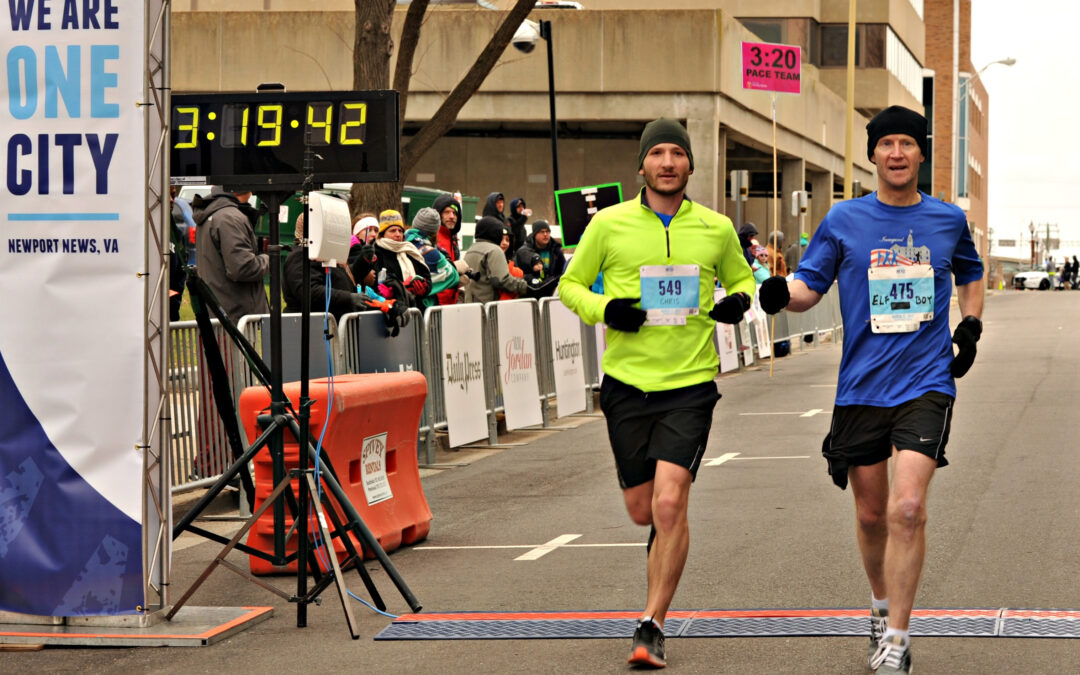 “If you used a Venn diagram of the running crowd and the beer crowd, those two circles would have a pretty solid overlap,” Chris Smith, co-owner of Virginia Beer Co. told me.

Smith and I had met as Virginia Beer Co. was opening in 2016. We quickly figured out we were in the overlap of the running and craft beer Venn diagram sets. Running is like that, as with other shared passions. A common interest sparks an immediate sense of kinship.

Smith was already a runner when he and Robby Willey opened the Williamsburg brewery. He originally ran to stay fit for sports. Once the sports ended, he said, “I needed a way to stay fit and to have an outlet for my energy.”

Like Smith, Phil Ray, co-owner of Center of the Universe in Ashland, ran mostly as training for other pursuits. After some injuries, he transitioned to endurance sports – marathons and relays, biking and triathlons. His wife, Ashley, has recently embraced endurance sports as well. The two of them tackled 330 miles on the Great Allegheny Passage and C&O Canal Towpath trails last fall. He’s signed up for the November 2021 Cozumel Iron Man.

“Running is good way to get empowered,” Ray said. “It’s just you and your thoughts. You can find your zen. It’s empowering and liberating, being able to run 20 miles or bike 100 miles.”

Eric McKay of Hardywood Brewing in Richmond swam and ran in high school and college and joined a triathlon club in college. “I found running a nice way to decompress and to clear my head,” he said. He met Rebekah, who became his wife, when both were training for a marathon in 2000.

After college, and especially in the early days of Hardywood, it became harder to find time for exercise, but he was inspired to get back into it by a classmate from Davidson College, Andrea Peet. In 2014, Peet, an avid runner who was training for her first Ironman, was diagnosed with ALS, Lou Gehrig’s Disease, and given two to five years to live. Despite the prognosis, she’s riding a recumbent trike toward her goal of being the first person with ALS to complete a marathon in all 50 states. Peet has raised more than $500,000 toward ALS research through Team Drea.

“She took her diagnosis as an opportunity to encourage others – if you’re able to get out there and exercise, do it,” said McKay.

McKay has returned to running, biking, and swimming. In 2020, he supported Richmond Sports Backers in two virtual cross-country relay events, one for runners and one for cyclists. He’s signed up for the Sports Backers biking relay again in 2021 and for Ironman Maryland in September 2021. 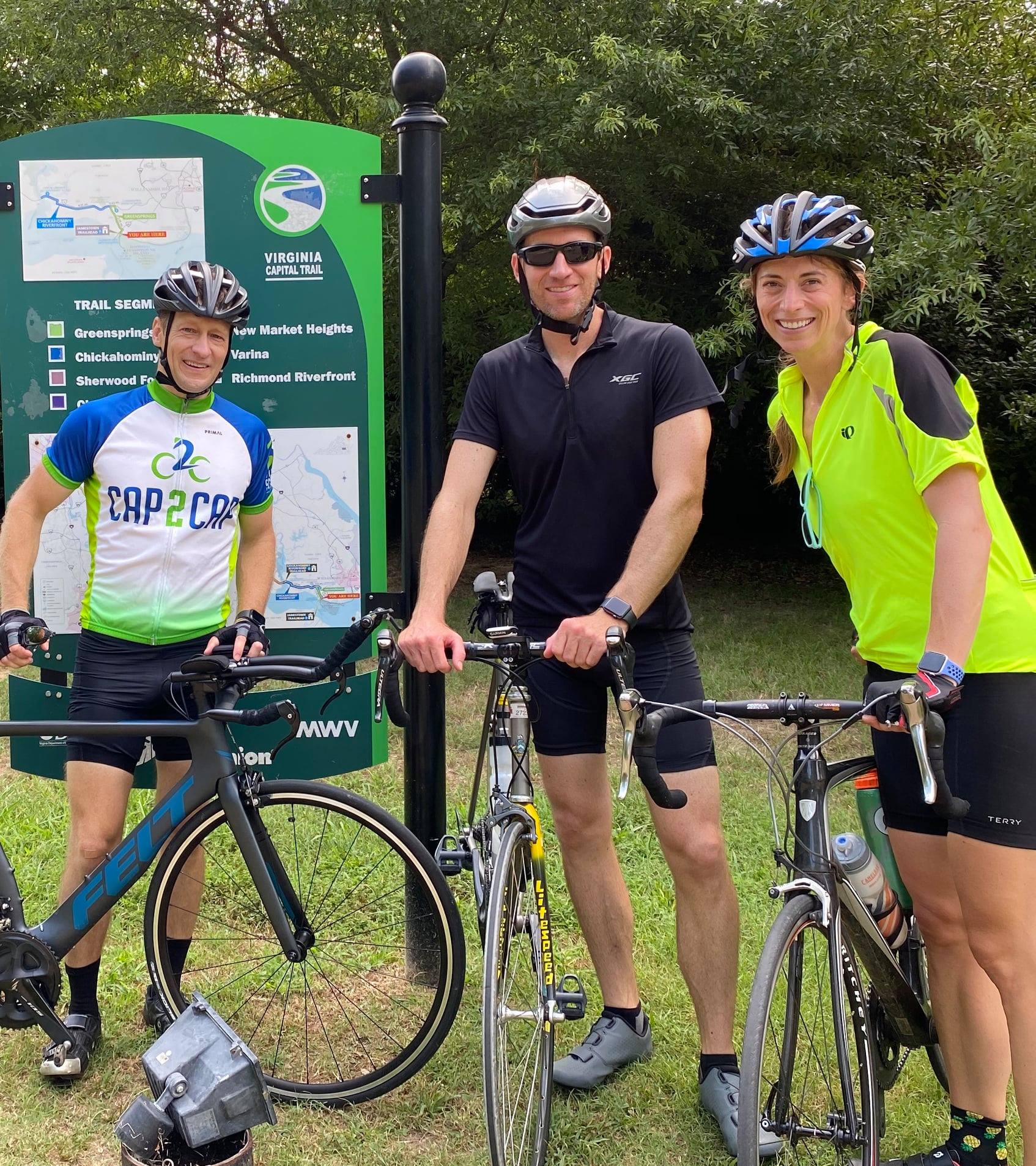 Joey Darragh and Tony Giordano were outdoor sports aficionados before opening Väsen Brewing in Richmond. The cousins were immersed in Western outdoor sports when they decided to open a brewery in Richmond. Väsen, which means inner essence, highlights the connection with the outdoors and the environment. “Our goal is that our beer is going to inspire people to get outside and explore those natural opportunities that are surrounding them,” said Darragh.

Since coming to Richmond, Darragh has adopted Central Virginia’s favorite sports. “I’ve fallen in love with mountain biking, spending a lot of time down at Pocahontas State Park and throughout the James River Park System,” he said. He’s also enjoyed rock climbing at Manchester Wall and rafting and SUP trips on the James River. Giordano enjoys trail running, mountain biking, and hanging out in the river.

“We have an amazing group of outdoor athletes and adventurers that truly embody the love for the outdoors that Väsen represents,” said Darragh. “While COVID has thrown a curveball for the social aspect of the program … as things slowly return to normal, we hope to really showcase our Vagabonds through taproom events (informational workshops, gear swaps, etc.).”

Tony Ammendolia, owner at Final Gravity in Richmond, began exercising more recently in life. He started running in 2006, before he opened the brewery or Original Gravity homebrew supply store. “I had a desk job at the time, and I knew that it wasn’t good for you … so I thought, I need to get active,” he said. “I went for my first run and I only made it three or four blocks before I had to sit down on the curb, and I felt like I was going to die. I was about 36 years old, and I was like, I am way too young to feel like I’m going to die after just running a few blocks.”

He continued running for fitness. He ran as a casual, solo runner, until Final Gravity started a running club. “That was my first experience with group runs …, but once I started doing it, I found value in it.”

He started biking, too. And that was not incidental to the beer scene. He was inspired by Quy Pham, bartender at Mekong in Richmond, and by mutual friends. Although Quy died in a swimming accident in 2019, Tony still rides regularly with the group. He aims for 60 miles of biking each week. He occasionally participates in organized running events, with a goal simply to complete the course.

Louis Scheer, owner of Molly’s Bicycle Shop in Chester, added Molly’s Blind Dog Brewery to his retail and repair space in 2019. He had heard of a similar bike/brewery concept and decided that the combination would work for him. The tasting room would draw additional customers, steady his income, and give repair shop clients an enjoyable way to hang out.

Chris Smith recalls the early days of Virginia Beer Co. His annual running mileage dropped from 3,000 miles per year to 2,000. He’s up to about 2,300 annual miles now, he said, and “still figuring out a way to balance everything. But as you know, it’s so important to get your mind off something like a small business that you’re always thinking about. Or to give me time to think about it in a different way, in a quieter way.”

Though Smith enjoys running with other beer lovers, he also runs with a local group that isn’t beer-focused. “Those people are all very supportive of the brewery, but they’re not huge beer nerds,” he said. “It’s actually really nice to get in a different setting where it’s not about beer, not about the brewery. They’re also a good sounding board for me for ideas and for our business, because they’re not involved at such a ‘beer nerd’ level.”

Chris Ray said, “Running certainly helps to burn off a few extra Pocahoptas [IPA] calories.” But he sees a more essential connection: “I think [the interest in endurance sports] is more of a byproduct of the type of personality that forces you to be an entrepreneur. You’re always striving to test your limits, to see what else you can do.”

Center of the Universe has run Ragnar relays with brewery staff. “It’s great for team building,” said Ray, “the mutual suffering that brings everyone together.”

“A part of running is directly due to the fact that I love beer,” McKay admitted, noting the calorie-burning benefits. “But also, for me, there aren’t that many times through the course of the day that I’m not bombarded with constant decision making, whether it’s at home with the kids or at work. Running for me is kind of an opportunity to reflect and think and meditate a little on what all is going on Hardywood-related. And I come up with ideas for beers to create on longer runs or rides.”

Ammendolia’s biking occasionally benefits his business directly: when someone new rides with the group, finds out he owns Final Gravity, visits, and continues to support the brewery. But that’s a happy accident. “Mainly,” he said, “it’s just nice to have a community-based activity – doing something not only to help with staying healthy but socially active as well.”

No single beer style seems to check all the boxes for an ideal post-workout beer. Instead, the choice seems to be a matter of preference.

Smith prefers low-ABV beers. “We released a new core beer couple years ago, Liquid Escape, low-alcohol (4.4%), half soured, with lemongrass and sea salt. It’s the Gatorade of beers.” Virginia Beer Co. recently initiated a focus on 3% beers. “They appeal to more health-conscious consumers as well as those who love drinking beer but not the potential aftereffects,” said Smith. The beer names will likely reflect physical activity (Pace Breaker and Next Point Wins being the first two) and will include a diversity of styles.

Phil Ray gravitates toward the COTU Ray Ray’s Front Porch S’IPA. “It’s a nice session beer, not too heavy, but still the good hop character that we’re after.”

“I don’t usually drink fruit-infused beers,” Tony Ammendolia admitted, “but when we do the run club, I always like one of our fruited sours at the end. It’s usually a gose, like a beer version of Gatorade.”

At Väsen, Darragh said, “Our Läger and Hefeweizen are great go-to beers after a workout, but I’ll also gravitate toward some of our IPAs and sours when the occasion calls for it. Our Okolnir IPA and Sunburst Sour taste that much better after getting a good sweat on!” Giordano said, “Post-workout beers are all about the lagers. Väsen Radapils all day.”

For McKay, beer choice depends on the weather. “Suncrush we designed to be a more super-refreshing low alcohol, a little bit of caffeine from the matcha green tea.” Hardywood is releasing a variety 12-pack in April, with tangerine, black cherry, Southern peach, and lemon-lime. “For us, it was our take on hard seltzer – more flavorful, light and refreshing, low in calories and low in alcohol. I really enjoy it as a hot-day, post-run beer.” But other days, “Richmond lager also is my go-to, for just a really refreshing, little hint of citrus, subtle sweetness from the malts. Pils has a little more bracing crispness that can also be really refreshing after a run. In the wintertime, I generally go for porters and stouts, as the fireside kind of warmup after a cold run.”

Active in the community

Run clubs are popular at many craft breweries. Run with friends, then grab a beer with friends. These brewery owners are looking at other ways to incorporate active pursuits in their offerings.

“Breweries are great venues for introducing people to the fun side of fitness,” said McKay. “We’d like to do more of that, both here and in West Creek,” for runners and for cyclists. “We’d love to hear ideas from people … We see a future where you could ride bikes from [the Richmond location] through Scott’s Addition, potentially down to the Capital Trail, safely and with a designated path.” The West Creek property already has trails through the woods, and McKay says Goochland County is planning trails connecting West Creek with Short Pump. For now, Hardywood organizes the annual West Creek 5k for ALS, a fundraiser for Team Drea.

“You do find a lot of runners in the [beer] community,” Ray commented. “I’m not sure what the draw is; maybe the independence of being able to run long distances, the same independent spirit of craft beer.”

Or perhaps it’s that runners – cyclists, swimmers, and others – want to burn the calories they consume. Whatever the reason, the Venn diagram overlap brings together plenty of kindred souls.