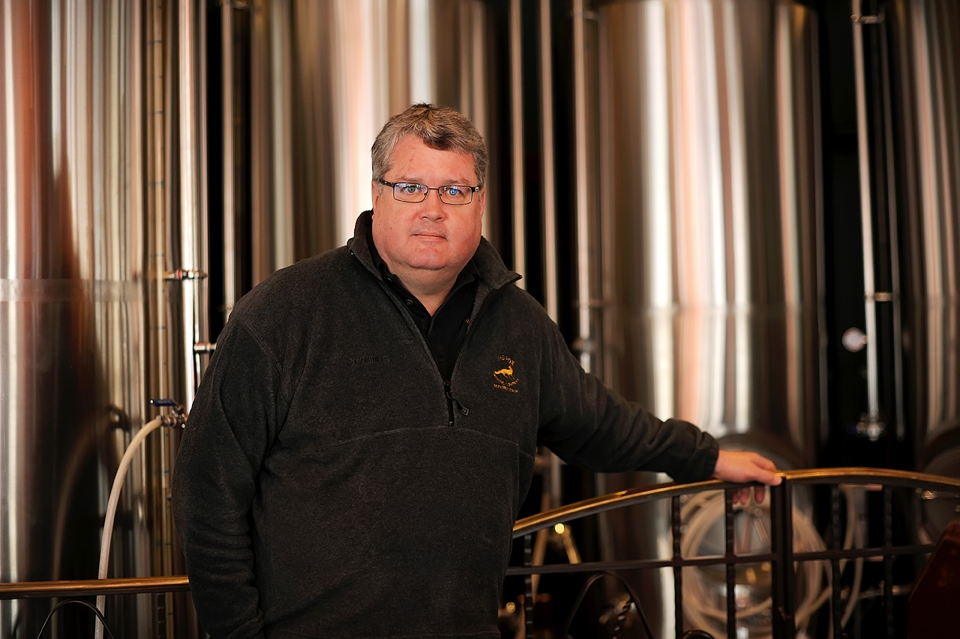 Since opening in July 2010, having fun has been vital to Mad Fox Brewing Company CEO/brewer Bill Madden. After all, he has built a career doing what he loves – making beer.

As his official biography notes, Madden moved to Northern Virginia after graduating from the Master Brewers Program at the University of California-Davis in 1995. Since then, the Gettysburg College graduate has developed his skills by opening and operating seven brewpub locations in Northern Virginia, the District of Columbia and Maryland while at Capitol City Brewing Company, Founders Restaurant and Brewing Company, and Vintage 50 Restaurant and Brew Lounge. He also worked at AC Beverage, where he built and serviced beer systems at the highest volume brewpubs and restaurants in the Washington, DC region.

Mad Fox – derived from the first three letters of Bill’s last name combined with his wife’s maiden name, Fox – is a large brewpub situated in the heart of Falls Church (444 West Broad St). The space is warm and inviting, with dark wood, large windows, visible oak barrels and a view of the brewery. Among the many awards earned by the brewery, winning a Gold Medal at the 2011 Great American Beer Festival for its Kellerbier Kolsch instantly established it as what Zagat labeled one of the best gastropubs in the DC area.

Having fun at Mad Fox comes in a variety of ways, whether exploring new, creative beers or pairing seasonal gourmet foods with an appropriate libation. Special events are also part of the experience, and Madden likes to feature uncommon things such as a Spring Bock Festival and a Barleywine Festival held each February. Upcoming events include a 4th Anniversary Party (July 12), Hoppy Oktoberfest Celebration (September 27) and a Cask Ale Festival (November 1).

I recently caught up with Madden to learn more about Mad Fox Brewing Company. Here’s what he had to say.

How did you get your start in the brewing business?

I was a home brewer in San Francisco. I got the home brewing bug, and a lot of my friends said my beer was pretty decent and that I should check out UC-Davis. I had never even heard of brewing school before. The idea of going to school for something you love was foreign to me. I went to Berkley and took some brush-up courses there, and got accepted into the masters program at UC-Davis. I graduated in 1995.

How would you describe the American craft beer scene in 1995?

I was living on the West Coast. Things were perking up out there. We had Triple Rock, Bison Brewing Company. My favorite was 20 Tanks in San Francisco. There were a whole bunch of brewpubs and craft breweries. I was in the thick of it back then. I wanted to come back East because of my family. I got hired by Capitol City Brewing Company in 1995. I’ve stayed in the Mid-Atlantic region in the brewing profession since then. Capitol City offered the best opportunity at the time because they were only three years old and looking to do a nice, big expansion. It was a great learning experience for me, opening and designing more breweries. Things were really starting to happen in the craft beer industry.

Your experiences have certainly brought you to where you are today. What is it about a brewpub that appeals to you more than a manufacturing brewery?

I’ve always been a brewpub brewer. Being a brewpub brewer is different than a packaged brewery in that you’ve got a connection with the guests. You can always experiment and perfect your craft. Its not to say that packaged brewers can’t do that, but we’re constantly producing new products at all times. We can change on a dime if there’s something interesting happening in the market. We haven’t got four flagship products and a seasonal every three months. We’re coming up with new products at all times. We have 10 to 12 beers on draft and six hand-pumps. We have three to four cask ales on tap. We’ve got a barrel-aged program. We get to have a lot of fun. It keeps it interesting for me.

Speaking of experimental beers, I noticed you do some collaboration as well. Do you enjoy the process?

Yeah. We’ve done some collaborations with Bluejacket and some of the other local (DC area) pubs, bars and tap-houses – Smoke & Barrel, Meridian Pint and Granville Moore’s. It’s fun. It brings in another element of someone else sharing in the experience and being excited about the brewing process.

We haven’t done as many with other breweries. We’re looking to do one with DuClaw soon. I’ve know Jim Wagner, the head brewer up there for ages. We both grew up around the same time in the brewing industry. That’ll be a really good one for us to do.

You’ll be bottling some of your barrel-aged beers soon. Is this the first time Mad Fox beers have been packaged?

Yes. This is the first time for the brewery and it’s my first time bottling outside a small run for a competition. We’re planning on doing some barrel releases that are very unique products. They’ve either gone through the barrel process or they are very limited. We finally got label approval through the TTB. I’ve got the rest of the labels going through Virginia ABC so we’ll be covered on all those areas. We’re not planning to sell across state lines, but I wanted to have the ability to if we choose that down the road.

Will they be available as limited release editions in specialty bottle shops or exclusively sold at the brewpub?

Potentially at specialty bottle shops. We’re going to do them in-house first, and then see where it goes. We don’t have a distributor yet. I’ve been talking to a lot of the Virginia distributors. I know them all so it’s tough to pick just one. Doing business in Virginia outside of selling kegs, growlers or bottles out the door we have to have a distributor that’s the right fit for the business.

With the increased popularity and demand for craft beers is it a challenge to produce enough beer for the brewpub consumers?

Certain products we do run out of. For example, the Orange Whip IPA, which is very popular, we tend to go through that pretty quick. But we’ve got a big brewery back there. When we developed the business plan and designed the brewery, we built a big brewery that could surpass even the demand of more than one location. We are in the process of developing a taphouse that we’re building in Glover Park in DC. We’ll be able to supply the taphouse along with Falls Church and doing some distribution and the bottle program. We have the potential to do a lot out of this brewery. Right now, we’re doing about 1,400 barrels in production that we’re selling within the four walls. We do have some distribution in DC right now. We’re in Nats Park and some bars that know our product and appreciate it – Church Key, Granville Moore’s, Meridian Pint, Smoke and Barrel just to name a few. We have a lot of capacity here and we need to share it.

Mad Fox does have an impressive lineup of beer and some, like the Kellerbier Kolsch, that have won medals at the Great American Beer Festival in Denver. How do you decide which beers to enter in competitions?

With the way the competitions are going, because there are so many breweries now in the United States, it is becoming extremely competitive. For example, in the World Beer Cup 2014, you were only allowed four entries. So we sent four entries. Same for the Great American Beer Festival. They’ve paired us down so you can only do four entries there even. We’ll decide which are our best. Which fit the category best. It’s a discussion amongst brewers and some of our investors. We decide which ones should go and then send them out. It has been a fun process.

Most brewers have a favorite beer that they produce. What is your favorite Mad Fox beer?

We do all styles. We’re different from the Gordon Biersch or a strict ale brewery. I’m known for two styles of beer: Kolsch and the Orange Whip. Kolsch has been a very successful product for us. It’s a very small beer, a delicate beer to make. It really is a challenge. It’s a beer in which a brewer really stands naked. There’s nowhere to hide with a kolsch. I think we do a pretty decent job with it, too.

What do you see as the primary challenge with brewing a great kolsch?

Any flaw will stand out. You need to take the time to age it properly. We don’t flogger our kolsch any less than four weeks for filtering. Of course, the Kellerbier can be served a little bit fresher. That’s the style for what it is. Kellerbier is unfiltered, fresh off the fermentor. It’s about getting the right ingredients and using the right yeast strain. A kolsch yeast strain is a difficult one to work with. It’s a very dusty yeast strain. Filtering it is a nightmare. We take the time and care to give it all the attention it needs. That’s the trick for making a good kolsch. They are very popular in DC. It all started with the original Cap City and Cap City brewer who was German-trained. He wanted to do everything German he could. When he was asked to produce a light beer he came up with a kolsch. It was Cap City’s most popular product. There’s even a Kolsch Cup that Gordon Biersch holds down by the ballpark. I think they have a couple dozen brewers in the DC metropolitan area that participated in that. Last year was the first one.

What kind of thought is put into planning the food menu? Are the items selected based on popularity or because they pair well with beer?

The thought is to have food that pairs well with beer. The overall message is that we’re a European style gastropub. That term gets used too often so it’s really sourced food locally that makes sense in creating a menu that will pair well with the beer, and using beer where it makes sense. From there, it’s really the chef’s job to do that and have fun with it. We just got a new chef, Brian Wilson, and he’s putting his imprint on what the chef’s in the past have done. We’ve got pizzas, Bitterballen, which you’d find that in your typical pub in Holland. It’s pub food from Europe that we’re trying to do and put an American twist on it.

Are there seasonal food items available as well?

Always. We try to change our menu a couple times a year, along with the seasons.