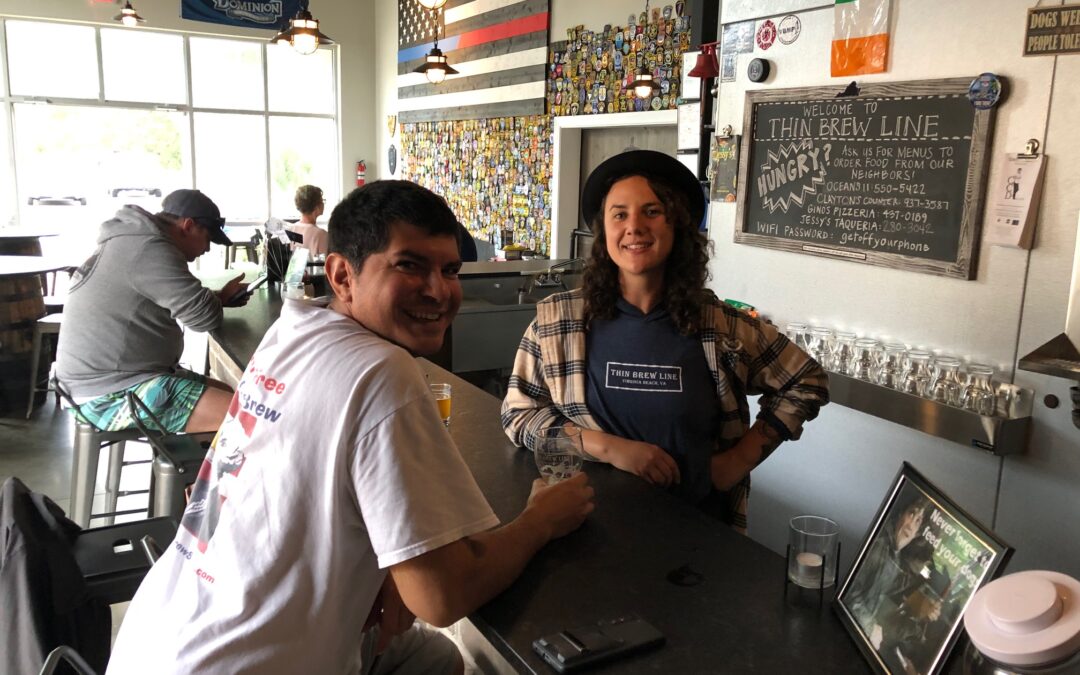 There you are in Virginia Beach, looking for a place to get a libation, a sip of suds, a beer. You’d like something fresh, delicious, and locally made. And you’d like to salute our area’s first responders at the same time. There is a place that meets your criteria in the Oceana Crossing Shopping Center – Thin Brew Line Brewing Company.

Their website indicates that Thin Brew Line is a “taproom that salutes our first responders and frontline workers.” It’s a small brewery with a big heart, making delicious beers for us, while simultaneously sending portions of their profits to all sorts of local charitable causes. When you’re drinking a glass of  “An Garda Siochana,” a dry Irish stout, a portion of the proceeds goes to the Virginia Beach Police Foundation. When you hoist a “White Line Hefeweizen,” you’re helping the Princess Anne Courthouse Volunteer Rescue Squad and Fire Department. And while you’re enjoying a Kolsch-9, aka., K-9, you are helping pay the medical bills of retired K-9 working dogs.

Jay Gates, brother of a Virginia Beach Police officer, and the brewery’s owner, planned on opening the brewery in 2016, but red tape at multiple levels s-l-o-w-e-d the vetting, building and approval process, resulting in a 2020 opening instead. Bobby Wynn, a retired Virginia Beach police officer, has been the brewer since then, creating some bodacious beers on their three-barrel brew system that’s shoehorned into a cozy space behind the bar proper.

When we visited the brewery in late May, the beer lineup had eight beers and one hard cider on tap. “Greyfriars Bobby” (5.5% ABV) is an English Brown Ale, while “Station 12 Fire Engine Red” (5% ABV) is a Scottish Red Ale. Continuing with the beers-by-color review, “Badge Hunny” (6% ABV) is a delicious Honey Blonde Ale that gets its sweetness from honey malt, not honey. They produce a light-bodied, clean “Kolsch 9” (5% ABV), and a “White Line Hefeweizen.” Speaking of light, their “Mick” (6.5% ABV) is a wonderful Coffee Blonde Ale; they use whole bean coffee from Virginia Beach’s “Three Ships Coffee,” and cold brew it so you can taste that coffee flavor but not darken the beer’s color. Crave hops? They were serving “disPAtch American IPA” (6.3% ABV), loaded with Amarillo, Columbus and Simcoe hops, and “Stache Strong IPA,” a Mosaic hops-perfused pop to your palate. Finally, if you need a palate-cleaner, “Hard Time” (3.9% ABV, available in a whole mess of flavors) is up to the task.

Mr. Wynn recently decided to return to retirement, so the Thin Brew Line began to look for a new brewer. They found one in Rafael “Raf” Corredor, owner and operator of American Homebrew Supply, located in the JANAF Shopping Center in Norfolk. Raf, no stranger to the Zymurgical arts and an experienced all-grain brewer, produced a couple of batches of beer with Mr. Wynn, who afterwards apparently felt he was leaving the brewery in capable hands. Raf’s debut beer is “Tee Off,” (5.8% ABV), is a Saison, and it should be available the first week in June. Chris got a sample, direct from the fermenter, and it’s great; it had rich flavors of tangerines, but surprise, all that citrus fruit flavor comes from the yeast.

One more thing. The two restrooms are … arresting. One has a “lineup” wall in it, so you and multiple friends can stand shoulder to shoulder, looking like a suspect, waiting for someone to snap your picture. The second one is made to look like the cell that Tim Robbin’s character inhabited in “Shawshank Redemption.” Different, that’s for sure.

BOLO the brewery and enjoy some Thin Brew Line brews, 10-4?