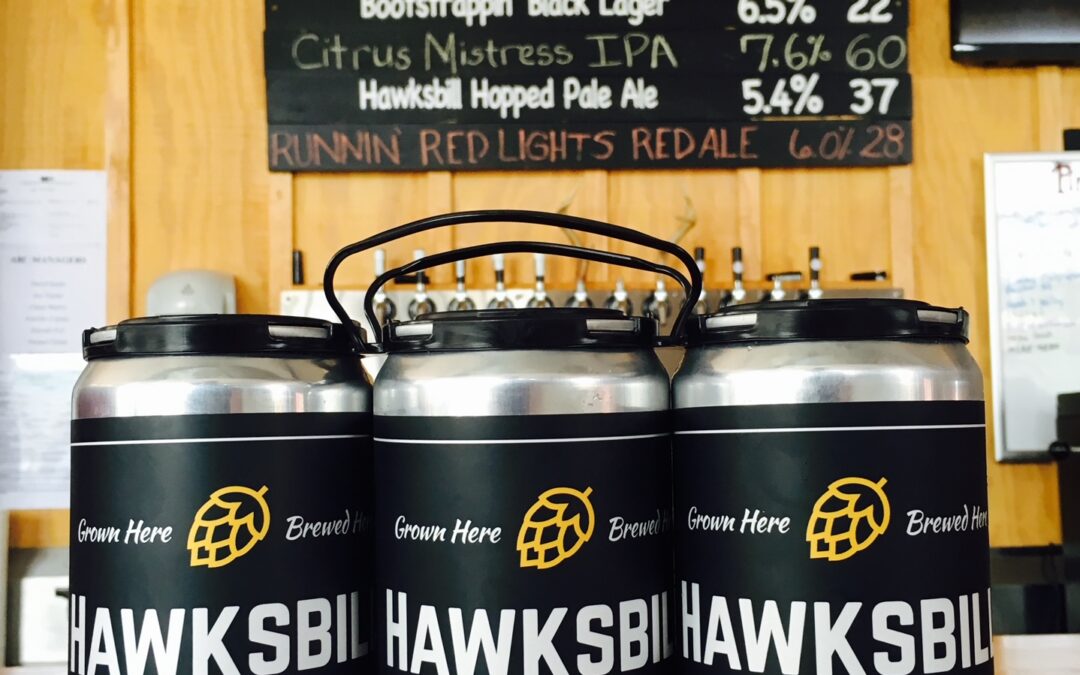 (Crowlers in 3-packs have been popular at Hawksbill Brewing Company)

Hawksbill Brewing Company in Luray, VA is so busy that they can’t keep up with the demand. They are getting a lot of trickle down from folks going to the Shenandoah National Park.

“As the protocol relaxed to Phase 3, we did start seeing the out-of-town business come back in the late summer,” said Jim Turner, the brewery’s owner and brewer.  “We saw a lot of folks daytripping or making short stays from Northern Virginia and the other metropolitan parts of Virginia.  It was really encouraging and the business grew over those couple of months.  Eventually, boosted by October’s incredible weather and our annual Oktoberfest, we ended up setting a monthly sales record for ourselves – our best ever.”

Since Hawksbill Brewing Company opened in 2017 it has given new meaning to “local beer.” Its mission has been to exclusively — when possible — use local agricultural products, ranging from Luray-harvested hops and Page County-grown blackberries, in every batch of beer.

When the pandemic struck Virginia, Hawksbill never shut down; it hunkered down.

“After we caught our breath we were able to take some proactive steps that helped us make it through — things like selling Crowlers curbside, and working outside of our taproom model by trying to organize deliveries,” Turner said.  “We didn’t lay off staff either, but we had to cut hours a bit – we’ve got everybody back now though.”

During the early weeks of the pandemic, Hawksbill saw its revenues drop by 90%. Luray is a destination wedding venue and all of that business evaporated.

As Virginians became adjusted to the new normal, which still includes travel restrictions, many people sought to stay healthy by visiting in-state destinations in the mountains where crowds are minimal and the hiking, biking, camping, and canoeing are rejuvenating. And making a stop at a brewery was an absolute must, apparently.

“When we started reopening we had to step up production right away…inventory got really tight for a while there,” explained Jim Turner.  “We ended one weekend with only four kegs left in the cooler. Fortunately we had two batches (about 20 kegs) ready to keg that week before we re-opened.

“We also did guest pours while we were getting our inventory back up to speed; we offered a couple of Alesation, Winchester, and Escutcheon brews to help tide us over while our inventory recovered.  Like many small brewers, we did have some supply chain issues when production picked up: Crowler cans were scarce, and we even had some small delays in getting ingredients.  That’s all pretty much resolved by now though. We’re going to make it through the winter and we’re looking forward to a great 2021.”