Decipher-ing the Best of Show 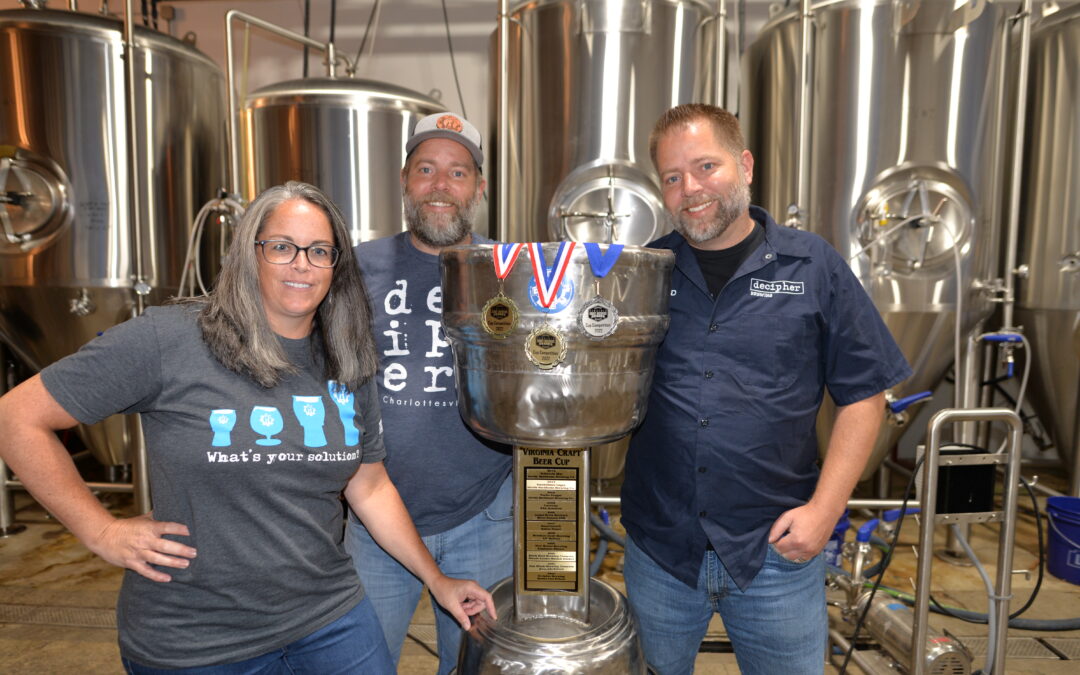 Barley Late Kölsch, made by Decipher Brewing in Charlottesville, won first place in its beer style category, was awarded Best-of-Show honors, and thus the 2022 Virginia Craft Beer Cup, by a team of certified judges for the Virginia Craft Brewers Guild’s annual statewide competition.

When it comes to brewing competitions, however, consider this: a lager, pilsner or Kölsch has won the Guild’s Best of Show the last six consecutive years.

While many consumers seem to consider lagers to be the most basic of beer styles, they are actually the most challenging to get right. The lagering process takes an extra week or so in the fermentation phase. The slightest flaws in any part of the process can have a negative impact on the final product. The brewer — as a brewer — is virtually naked with no abundance of citrusy hop bomb to mask imperfections. You either hit the nail on the head or you don’t.

So what of this year’s top beer?

Head brewer Brad Burton, who co-owns Decipher Brewing with his wife Megan and brother Scott, describes it as “a traditional German style Kölsch.”

The recipe for this flawless lager originated from Tom Wallace, a Charlottesville local who won his homebrew club’s competition. The award included being able to brew a larger batch on Decipher’s system.

Decipher Brewing was established in 2019. Brad and Scott learned to brew on the apartment stove. Having each served nine years in the Navy, they decided to go all-in on making their dream a reality. Megan officially joined full-time after retiring from the Air Force after 20 years of service. Kölsch was a style they each enjoyed, but it wasn’t the top of the to-do list as a business.

“I wanted it to be one of our first beers,” explained Brad Burton, “but we were so tight with money because of how expensive the Kölsch yeast is that we went with a Blonde.”

The recipe for what is today draft and canned versions of Barley Late has been tweaked a little since the very batch.

Sharing more detail, Brad said, “We use White Labs Kölsch Yeast for this beer. We’re a small brewery and we don’t have an in-house lab. Whenever you make the Kölsch you hope that it turns out like the last batch did. There are some variations that take place when you’re on our (small) scale.”

Since winning Best-of-Show, word has spread and customers have been flocking to the brewery to taste for themselves.

“We’ve seen a 19% increase in sales and the Kölsch has taken over the number one spot in sales from our West Coast IPA,” said Megan.

“We have a 7-barrel brewhouse but our tanks are 15-barrel,” said Brad. “We’re going to have to do a double-batch of the Kölsch just to be able to keep it on tap at the brewery.”