FIRST PERSON: What a Long Strange Trip it Has Been 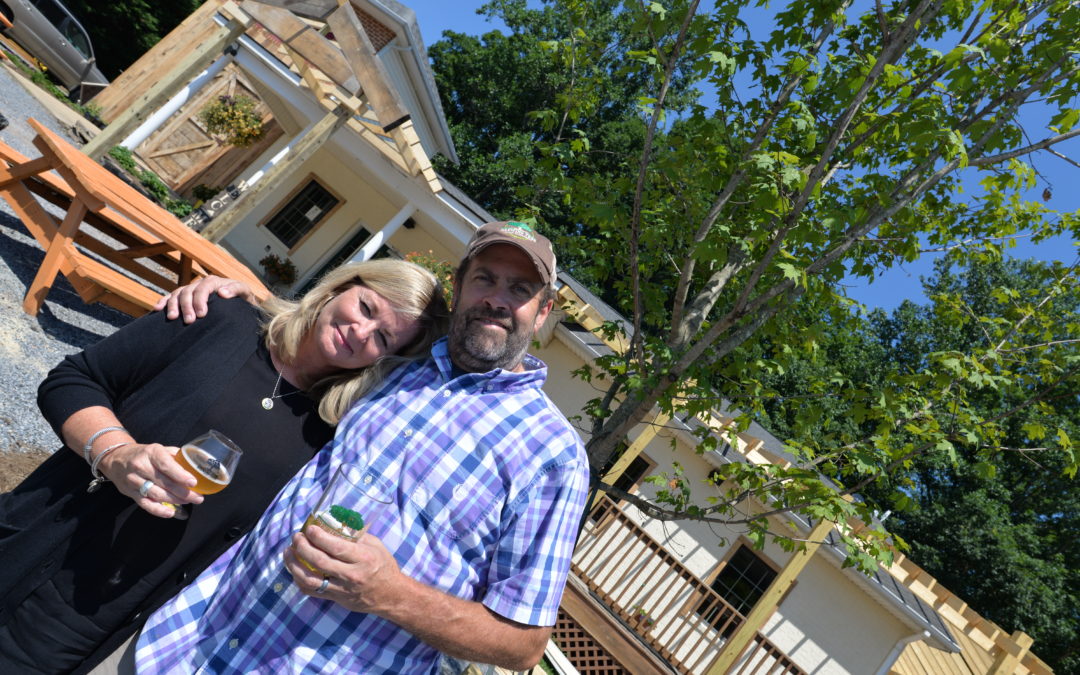 (Gina and Mark Thompson pictured in 2018. The Brewing Tree marks its one-year anniversary during the month of June.)

The close of the 1990s brought the opening of the craft beer scene in Virginia.  Until then, there were very few craft breweries in the state and the consumer preference for locally made beer was ambivalent at best.  The prevailing headwinds were that craft beer was just another fad, destined to come in with hype and fade to the ashbin of history.  Who would have imagined that a rag tag group of passionate brewers would have the courage to take on ‘big beer’ with a little known “bath tub gin.”

Looking back, there were only a handful of breweries in the state and few consumers who had adopted the beer as other than a novelty.  Virginia had Jerry Bailey and his all-star staff at Old Dominion Brewery as the largest and most prolific brewery in the state, and then a small group of fledgling breweries.

Outside of Old Dominion, at the dawning of the 2000s, Virginia was a bleak landscape of misfit breweries.  From memory, you had Andy Rathman at St. George Brewery, Fabio at Richbrau, Jacque Landry and Taylor Smack at South Street, Tom Martin at Legend Brewing, and myself at Starr Hill.  There were probably a couple of others, but this small clan bonded together as a band of brothers.  It is hard to overstate how at the time, no one thought that craft beer would evolve into what it is today.  The challenges were overwhelming, consumer demand was low, wholesalers were apathetic, and retailers did not see a saleable product.

Throughout the early 2000s, consumer demand for craft beer in Virginia was low.  The perception of craft beer was that the flavors were too bold and the quality too low.  There was not an appetite for the aggressive flavor profiles in a market dominated by lagers that were yellow in color, low in hop bitterness and flavor, and generally lacking in robust flavors.

Access to market has always been controlled at the wholesale tier.  Craft brewers are prohibited from selling beer directly to retailers.  The evolution of the distribution tier over the last 20 years has been amazing to watch.  It was not that long ago when the choice for a brewer on how to distribute were twofold.  One group of wholesalers were well funded and worked almost exclusively for one of the three large national beer brands.  The second group was a small and underfunded independent wholesaler.  It was slim pickings for the brewer to gain access to the market through this dichotomy of wholesaler choices.

Things began to change in the early 2000s when a couple of craft brewers chose to start their own distributorships who only sold their breweries beer.  The adage that ‘if you can’t beat them, join them’ applies.  Self-distribution is not allowed in the state, but a close family relative could own the wholesaler, and thus by pass the constraints of having to go through the traditional distribution channels.

As the craft beer industry matured during the late 2000s  the large national wholesalers began to reevaluate their exclusive mind set and began to take on more craft breweries.  What was once a business advantage to be exclusive was now a deficit.  Local beer had grown in popularity and captured the romance of beer by telling the story of small business owners making flavorful styles of beer.  The consumers continued to adopt a preference for these locally made beers and that demand opened up both wholesale and retail opportunities.

The irony of this journey is that currently the industry has matured, wholesalers that once would not take on a craft brewery have rushed in to start selling them, and now find themselves unable to handle the increasing number of those breweries in their portfolio.  We have come full circle to the point that a new packaging brewery will have a hard time fitting in to a wholesaler’s portfolio and find access to market.  Who knows what the future will hold, but the momentum in the industry is for small “tasting room” breweries with little to no distribution.

Mark Thompson is president and brewmaster of The Brewing Tree Beer Company in Afton, Virginia.