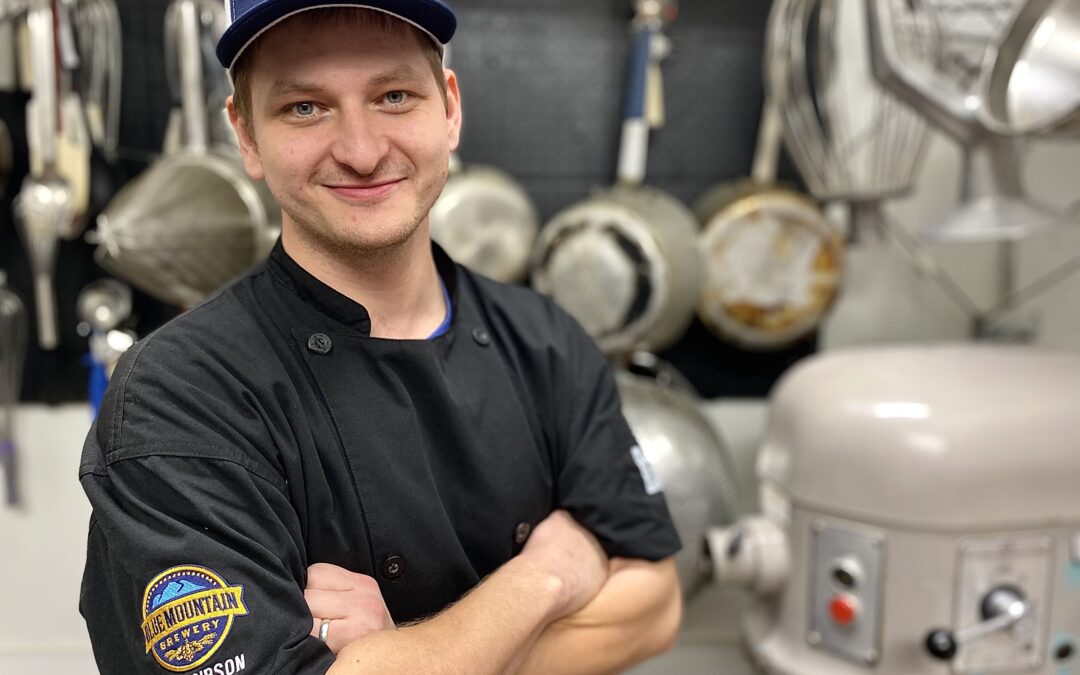 While it may sound cliche to announce that you can’t throw a stone without hitting a brewery in Central Virginia these days, it’s not that far from the truth. However, finding a solid brewery with equally enticing in-house food options can be a struggle.

Blue Mountain Brewery in Afton has sported a top-notch selection of beers on its taps paired with a tremendous view of the Blue Ridge Mountains since its inception in 2007. However, it’s also drawn crowds thanks to its diverse food menu created craftily with ingredients sourced from local producers.

The brewery’s kitchen has most recently been led by Cole Gibson who has been cooking professionally for ten years with most of that time spent between Boar’s Head Resort and Blue Mountain Brewery. Gibson describes the menu at Blue Mountain Brewery as hearty locally source pub food. Dotted with pub grub favorites like nachos, wings, burgers, and dips and enhanced with specialty sandwiches like a unique Greek take on grilled cheese or pizzas like the pulled Pork and Peach, as well as a solid desserts including the chocolate and caramel drizzled ale-infused bread pudding, the menu is as approachable as it is interesting.

Born and raised in Afton himself, just four driveways down from the brewery, Gibson attributes his love of cooking to his family influences.

“Growing up I spent a lot of time in the kitchen with my grandfather. I have enjoyed cooking since I was young. My grandfather raised me and was always very passionate about the food he made and loved making others happy with his cooking.”

That same passion inspires Gibson and contributes to the uniqueness of the brewery’s food through the local sourcing and dedication to ingredients.

“Our ingredients are local and all of our food is made with passion. Our ingredients come from as many local sources as possible. All of our sausage and brats come from Double H Farms, our bread from a bakery right down the street, Goodwin Creek, and our ground beef from Seven Hills Farm in Lynchburg,” says Gibson.

“Good food takes time and you have to put your love into the food you are preparing,” Gibson says.

While Gibson most enjoys working with fresh herbs and meats, with rosemary and lamb at the top of his list, his favorite menu item is the sausage pizza. Many of the brewery’s guests would likely agree – on any given night at Blue Mountain Brewery, the pizzas are clearly the star of the show, being ushered out of the kitchen to table of couples, families, and friends, on the regular.

Cooking in a brewery naturally requires utilizing the brews themselves, or finding particular ways to pair ingredients with the dishes being prepared in the kitchen. Gibson works in tandem with brewers to create an experience for diners that intertwines food and brews.

“We try to get with the brewers and use the beers in our ingredients as much as possible. Our bratwursts are boiled in the lager that is brewed here, we put the brews in the soups when possible, and every Tuesday we have Full Nelson battered fish tacos,” explains Gibson.

When asked about pairings, Gibson suggests strong beers with strong foods, considering the alcohol content, hop content, bitterness, and richness of the brew. He suggests that if ever in doubt, opt for the brewery’s Full Nelson. However for his own personal pairings, Gibson hails back to that sausage pizza.

“I enjoy the local sausage pizza with a Red Zeppelin and for dessert a Dark Hollow bundt cake with a Mountain Mule stout.”

Owner Taylor Smack speaks to Gibson’s dedication and contributions to Blue Mountain Brewery as well, noting that Gibson has worked hard as part of the team for over a decade to become the head of the kitchen that he is now.

“Cole was recruited by our previous head chef the better part of a decade ago. He has climbed through the ranks of the back of the house at Blue Mountain, while also having stepped away to gain experience in other excellent kitchens, but always coming back to us pretty quickly,” Smack reflects. “Cole is serious, focused, level-headed, extremely professional and just a no-drama type of chef. It’s that last characteristic that makes him my favorite!”

While Gibson may have been recruited by a previous chef, he and the owners share a vision and philosophy that Smack articulates with enthusiasm: offering the gift of great beer and local food surrounded by the beauty of Virginia.