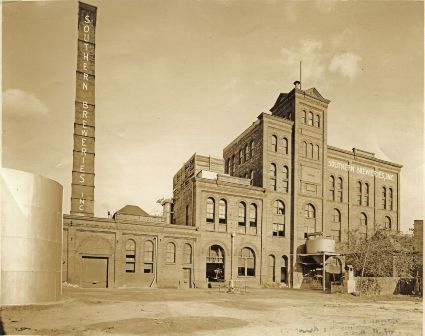 More than a half dozen local brewers of lager beer appear in the Norfolk city directory of 1900, the most prominent of which, or at least the most heavily advertised, was Consumer Brewing Company in the Huntersville section of then-Norfolk County. Consumer opened its Washington Street brewhouse in 1895 and advertised Bavarian beer, Elk beer, dark beer, pale beer and malt beverages, something for every palate. After Virginia went dry in November 1916, Consumer stayed afloat for awhile by turning over the plant to the Virginia Fruit Juice Company, which produced a fruit beverage there from 1917 to 1921. Southern Brewing Company bought the facility in 1936, producing Southern Beer, “The Pride of the South.” It was the first brewery to open in Virginia after the repeal of the 18th amendment. Southern Breweries sold the plant to Jacob Ruppert Breweries in 1942.
Champale Products, Inc. began production here in 1953. Later a subsidiary of Iroquois Brands, Ltd., Norfolk’s was one of only two Champale Breweries in the nation. Touted as the “champagne of bottled beer,” Champale operated here until mid-February 1980.
The brewery was located in Huntersville at 710 Washington Ave., east from 1448 Church Street. It was built on the site of the old Lesner Park, AKA “Lesner’s Maplewood Gardens,” once a fashionable gathering spot for Norfolk East Siders to meet, to stroll and probably to raise a frosty glass or two.

America has always been referred to as a “melting pot.”  Taking into consideration the wide range and cultural influence of the individual brewing cultures brought to this country by immigrant stocks, perhaps a more accurate description would be a “brew kettle.”  Legend has it that the famous pilgrims on the Mayflower were on their way to Virginia when their beer stocks ran low.  They went ashore in Massachusetts to brew another batch.  The famous landing on Plymouth Rock was essentially a beer run. Taverns in the early days of Colonial America were the testing ground of political thought and theory, and it’s not too much of a fanciful thought that conversations from Philadelphia to Williamsburg would find their way into our Constitution and Bill of Rights… all with a tankard of ale close at hand.  Beer is the most egalitarian and democratizing of beverages, and in the famous words of Benjamin Franklin:  “Beer is proof that God loves us and wants us to be happy.” And then there’s Samuel Adams, described by Thomas Jefferson as “truly The Man of the Revolution,” who also was known as a homebrewer, and thus celebrated in 1985 by the Boston Beer Company. Stroll down the historic Duke of Gloucester Street in Colonial Williamsburg and view tavern after tavern. Beer is as American as the Stars and Stripes.

A few miles south, Norfolk is, and always has been, a thirsty port town, and whenever there is work to be done, be it on the waterfront, in the fields, or at a desk, someone has been there to provide liquid refreshment.  From the ales that fortified our forefathers, to the artfully crafted brews that satisfy more refined modern palates, beer has always played a part in our cultural history. Sure the rowdy sailor boys of the 20th Century loved beer, but so did Norfolk’s citizenry.

The earliest record of a brewery in Southside Hampton Roads is located in the 1866 Norfolk city directory. A brewery registered to an F. Trudewind was located from 37 to 43 West Main Street in Norfolk, essentially occupying the better part of a block on what is now the corner of Main and Granby Streets in downtown Norfolk.  Handwritten notes on the advertisement in the city directory have the German spelling of “Bier.”  Could F. Trudewind have been a German immigrant, practicing his craft in post- Civil War Norfolk?  The 1883-1884 Norfolk city directory lists  a “J.F. Trudewind” as the proprietor of Concordia Hall, a “Wine and Beer Saloon,” “With pool and billiard tables attached” at 117 Church St.  Perhaps the brewery was a smooth transition into the saloon business. Was this the same fellow?  Was J.F. a son?  Also listed in the 1883-1884 directory as “Brewers and Bottlers – Lager Beer,” were The Bergner & Engel Brewing Co., on Madison St. (Near Water St.), and Robert Portner, of 83 Main Street.

Norfolk was the home to a number of breweries prior to the turn of the last century. The 1895-96 city directory lists a Bay View Brewery at 12 Hill St. and the Consumer’s Brewing Company.  National brands Pabst and Anheuser Busch breweries both had a presence in the area by then as well. The 1907 directory also includes Heurich Brewing, located at 24-48 Nebraska, the Hoster-Columbus Assoc. Brewing Company on Matthews (corner of Kelly), and Robert Portner is listed as operating a brewery at 16 to 24 Madison.  Schlitz was another national brewery operating in the area by then. 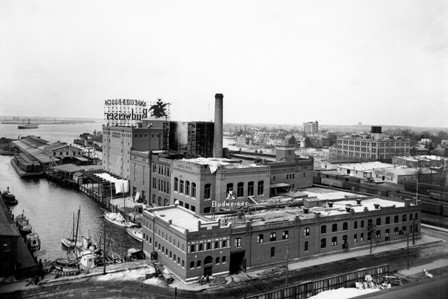 Budweiser factory operated in downtown Norfolk where the USS Wisconsin is docked today.

The Consumer’s Brewing Company (later to go by many names, including the Southern Brewing Company) opened in 1895.  It operated on Washington Avenue in the Huntersville section until 1916 when Virginia voted to go dry.  (Norfolk did so reluctantly.)  The brewery reopened just after the repeal of Prohibition as the Southern Brewing Company in 1934 and operated under that name until 1942.  In 1942, Jacob Ruppert Brewing of New York purchased the facility and it operated under the name of Jacob-Ruppert-Virginia.  They purchased the name and recipe of Red Fox beer from the Largay Brewing Company of Waterbury, Connecticut and produced it until 1953, when they ceased production in Norfolk.

The Century Brewing Company assumed production at the facility in 1953.  They produced beers and ales under multiple brand names, and tended to specialize in low-priced, bargain beers, and produced many store brands.  They produced Tudor Beer and Ale both under the Century name as well as under the brand “Tudor Brewing”.  Tudor was also produced for the A&P grocery chain. Among the brands produced by Century were: Banner, Embassy Club, Granay, Monticello, Red Fox, Regent, Spearman, Tudor, and Tuxedo.  In 1967 Century began operations as the Champale Company, which ceased production and closed for good in 1980.

The Atlantic Brewing Company was founded in Atlanta in 1867 as The City Brewery.  It went through a number of name changes over the following decades. They operated in Atlanta alone prior to Prohibition, but after Prohibition ended, they expanded to several other cities throughout the South and operated in Norfolk from 1936 to 1949. In the 1940’s, Atlantic had become the largest regional brewery in the South.  An attempt at courting brand loyalty by emphasizing a regional affinity against national beers resulted in an unfortunate cultural legacy.  One series of Atlantic cans featured a “Plantation” scene, and another of a “Darkie” (a popular advertising motif of the day) in a wig and waiter’s garb carrying a tray of beers.  This affinity was echoed by the Mountain Brewing Company of Roanoke, Virginia (1958-59).  Their “Dixie” can featured a Confederate hat atop crossed swords, and their advertising was Civil War-themed with a pointedly “Southern” bias. 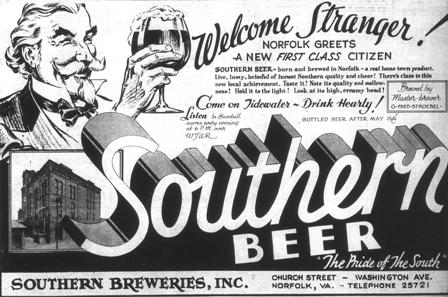 Southern Beer ad that appeared in the May 26, 1934 Virginian-Pilot just after the repeal of prohibition.

The loss of regional brewers was a nationwide phenomenon.  The dominant beer profile in America was at the time (as it remains primarily) a pilsner-type brew, with little discernible character.  It was easy to drink and provided no real challenge to the drinker.  The dominant brands became unwittingly engaged in a “race to the middle” to see who could develop a basic, non-threatening beer, palatable to the masses.  As a result, the vast majority of American beer brands were essentially indistinguishable from one another.  There was very little (save for a handful of brewers of specialty beers such as Bocks, Porters, and Stouts) to make a local or regional brewer stand out from its competitors. The large national brewing companies with their near-bottomless advertising budgets were able to dominate the then-new medium of television. The mass-marketing of brand-specific beer as a personal identifier was born.  The smaller local and regional breweries, with their hometown affiliations weren’t as sexy or attractive as the lifestyle being sold on TV, radio, or in glossy magazines.  A large number of local breweries closed their doors, dooming America to a decades-long diet of homogenous brews.

The recent groundswell of popularity in local craft beer is not an overnight sensation.  In other areas of the country, local and regional breweries captured the taste buds and budgets of beer drinkers.  Locally, it has been more of a slow process.  There have been others who ventured into the local brewing game with limited success.  So let’s raise a glass (mine is an O’Connor Norfolk Canyon Pale Ale) to other local brewers who once slaked our thirsts, but are no longer in business.

Chesapeake Bay Brewing Company, under the tutelage of local brewing legend Allen Young began brewing the iconic Chesbay Double Bock, a Gold Medal winner in their first entry into the Great American Beer Festival in 1987.  Popular among the beer cognoscenti, Chesbay did not receive enough support among the rank and file beer drinkers of the region for it to be commercially viable.

The Old Dominion Brewing Company opened in 1989, and was later purchased by a joint venture between Fordham Brewery of Dover Delaware and Anheuser Busch. Dominion Beer retained its branding and is still produced by Fordham.

19th Street Brew Pub:  Perhaps this was an idea ahead of its time. This location had a lot of potential, but did not catch on.  (The brewery was operation in the late 1980s. The Commissioner of the Revenue’s office in Virginia Beach could not locate the exact dates for when this brewery was in business.)  The location then became the lauded, yet also defunct club The Abyss.

Steamship Brewing:  Located on 24th Street in Norfolk, Steamship opened in 1995 and was operational for just under two years.  Local brewing kingpin Kevin O’Connor got his first commercial brewing experience here, and the O’Connor Brewery is located almost exactly a block away from the former Steamship location.

Hilltop Brewery, Laskin Road, Virginia Beach:  This now-closed brewpub in the Hilltop area of Virginia Beach enjoyed a moment in the sun with their German-styled brews and a strong following with local and military clientele.  Their Navy SEAL-themed “Frog Grog” was popular.

Alt Platz Brewery & Pub, Portsmouth, VA:  This small operation opened in 2006 on High Street in Downtown Portsmouth.  An ambitious, but short-lived brew pub, Alt Platz was easily recognized by their military-themed label art, and their wide range of beers.  The pub was hindered by early and inconsistent operating hours, and wasn’t able to gain a real foothold.  They produced a dizzying array of beers for such a small operation.

From the clay pots of ancient Egypt to the gleaming stainless brew kettles of today who work tirelessly to provide us with the best quality product possible, beer is indeed a living thing. It is the People’s Drink.