PROFILE: Hop On Over to Patch 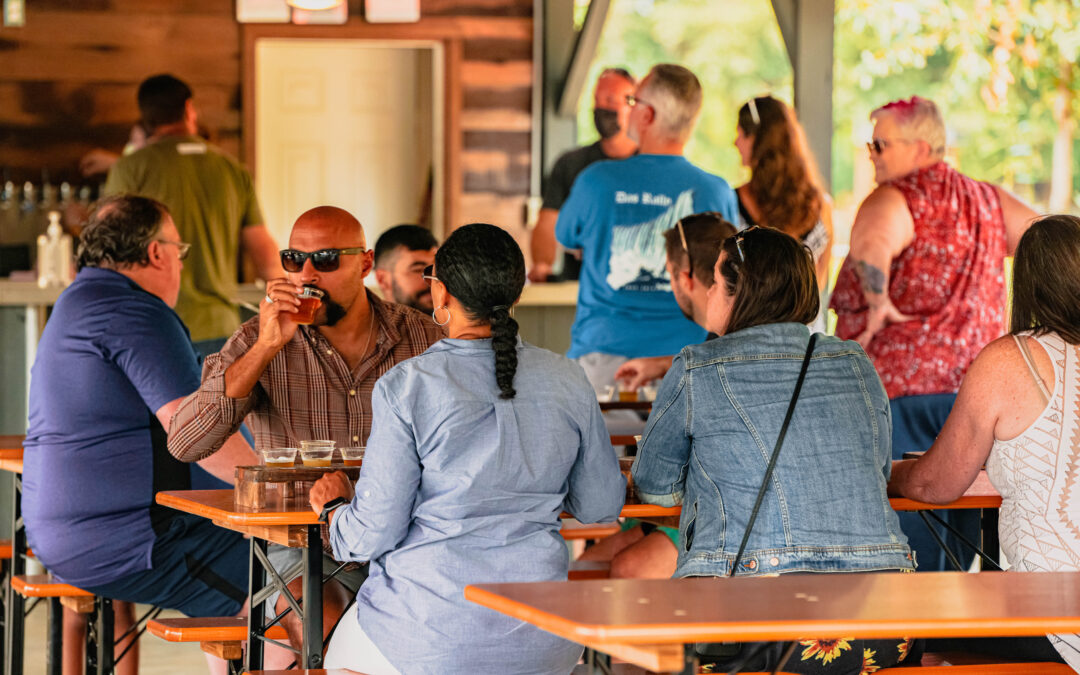 After founding and running the successful Hop On Tours, a bus excursion company that has hosted thousands of guests on trips to Charlottesville and Nelson area breweries, wineries, and distilleries over the past decade, Jon Craig and Andre Xavier decided to delve further into the craft drinks industry by opening their newest venture, Patch Brewing Co., in Gordonsville.

“They have watched the craft drinks industry grow in Virginia over the past several years, and wanted to become a provider as well,” explained General Manager Clay Hysell.

Patch’s location in the former VFW Post in Gordonsville sits on fourteen acres, seven of it wooded, and the building itself was built 60 years ago of solid cinder block construction. It is also home to a 2-story press box and baseball field. Additionally, Patch has converted the open-air picnic pavilion that sits adjacent to the ball field into a winterized taproom with sliding barn doors, a fireplace, and a half-dozen fire-pits.

“The VFW has had a strong tradition since the 1960s.  It was the first little league field in town, and the VFW hall was the site of weekly bingo, wakes, weddings, and many civic functions,” says Hysell.

Hysell says the brewery intends to continue that connection with the community. From hosting little league games in 2023 to being a site for weddings, family get-togethers, and birthday or retirement parties, Patch aims to maintain and expand the location’s role as a gathering spot for locals and visitors alike.

“We have been embraced by the local community and look forward to a long association. Several local dogs (and their owners) use our dog park weekly and we love to see them. We also look forward to increased association with the civil organizations of the foothills of Virginia.”

The brewery’s name holds a threefold meaning for the owners, the first being a nod to the location at the VFW, paying homage to military patches. Additionally, they intend to plant pick-your-own blackberry and pumpkin patches in future years. Finally, the brewery is being built in stages in a “patchwork fashion.”

“In 2021 we operated out of the former picnic pavilion and built a kids’ play area and an off-leash dog park. In 2022, we will open the indoor taproom (which used to be the VFW bingo hall) and will start games on our former baseball field. In late 2022 or early 2023 we will finish a nature walk through our seven acres of wooded property.”

Head Brewer Erik Filip and General Manager Clay Hysell were both former homebrewers. In addition, Filip has also worked as a commercial brewer for seven years at Three Notch’d and most recently at Devils Backbone.

As a farm brewery, some of the ingredients will be sourced from Patch’s own property. They are currently growing hops, blackberries, and apples and have located many persimmon trees in their wooded areas. The brewery intends to stay “true-to-style” and expects to offer several beers under an ABV of 5.0.

“Erik is a big fan of German and English-style beers, and it is likely that most of our offerings will derive from those two traditions. Expect Patch to offer well-executed lagers and ales that are approachable and drinkable. Beer-flavored beer.”

Due to supply chain issues, Patch has been challenged to garner all of the necessary brewery equipment and other supplies. As a work-around until later in the spring, Patch has been contract brewing their beers elsewhere using their own recipes. Filip also participates on brew days.

While Patch has a number of plans for its own expansion on the property in future years, they are also hoping to become another attraction along what Hysell cites as the “231 Corridor.”

“One great advantage is our 14-acre location right on Route 231 in Orange County within 5 miles of many other craft beverage settings (Keswick, Merrie Mill, Well Hung, Barboursville, Horton and Honah Lee Vineyards, Castle Hill Cidery, Champion Ice House and a new distillery coming later this year in Barboursville). We hope that the “231 Corridor” will develop popularity among the general public and all of these great venues can benefit from the increased visits that we hope this new ‘corridor’ will bring.”

As for events and activities, there is no shortage of entertainment at Patch. Trivia and karaoke are held alternately on Thursday nights and beginning on April 1, Patch will have live music every Friday and Saturday nights from 6-9 pm. Wednesday afternoons feature a “Diamond Dogs” event during which the brewery closes the gates on the baseball field creating the area’s largest off-leash dog park.

“We will be the only brewery in Virginia with a baseball/kickball field, an off-leash dog park, a nature walk, and a kids’ area.  We also offer adult craft nights and kids craft afternoons one day/month with tickets for sale on our online store. Upcoming events include “paint your own stein’ for adults, and tie-dye for kids. Future plans include a larger outdoor music venue, a permanent food truck, more fire pits, and a disc golf course. ”

In addition to being a farm brewery, Patch offers a number of other options for guests including cider and wine on tap, non-alcoholic beers, wine by the bottle, juice boxes, and soda. They also intend to offer a wine slushie option this summer in the indoor taproom.

“We will be growing in patchwork fashion over the next several years. We have a lot of ideas and a lot of space.  Guests, their families, and their pets can relax and enjoy music, kickball, off-leash dog time, kids kicking soccer balls in the field, or just laze at a fire-pit with a lager in hand. What more do you need? Come check us out and watch us grow.”