RESTAURANT REVIEW: No Secrets at the High Side 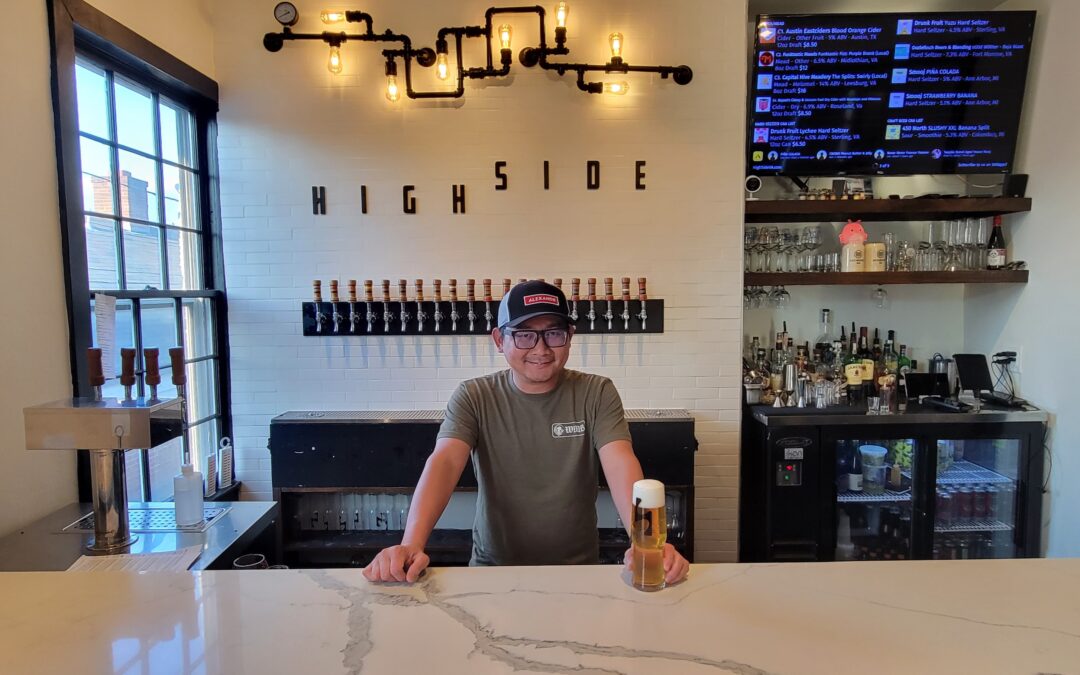 Write about beer long enough and you will hear about some very interesting paths followed along the way to a person owning a beer focused business, but Jinson Chan’s stands out and this is the story of a young man, born and raised in Malaysia, who hated beer and yet somehow went on to open High Side, a very cozy, very popular restaurant and bar in Fairfax City. Chan further went on to collaborate on beers with 20+ different  breweries over the last four years, including names like Crooked Run, Back Bay, Mustang Sally, Vasen, Oozlefinch, and Sinistral (all in Virginia) and Bluejacket in Washington, DC.  Now Jinson stands on the cusp of opening a production brewery in VA, but we’ll get to that.

At the age of 24, with a degree in Electrical Engineering, Jinson moved to Ames, Iowa for post graduate studies at Iowa State University and after completing his studies ended up at a small engineering firm in Arlington, VA (he was employee #16) working largely on defense department contracts, including interesting projects like one in 2004/2005 during the wars in Iraq and Afghanistan which was intended to provide a system to detect suicide bombers at greater distances.  It was interesting and intense and there was good camaraderie among the employees which led to two developments that would change the course of Jinson’s life.  One was a manager, now one of Jinson’s closest friends, giving him a Bell’s Two Hearted Ale and like that he expanded beyond primarily being a whiskey drinker.  Beer was good and before you knew it he was starting a Friday after work beer club.  Just five people to start, the club grew to around 25 and outside of work he was soon visiting breweries and having beer shares with friends one or twice a month.  But his beer dreams were bigger than all that.  Jinson wanted to open his own beer-centric business.

Interestingly, while visiting breweries and beer bars and beer friendly restaurants to talk to folks in the business and see the business from a variety of perspectives, a definite early inspiration was Falls Church, Va’s Spacebar — a cool, comfortable neighborhood bar with a simple food approach, i.e., grilled cheese and tater tots combined with a high quality beer tap list.  Jinson thought he had a great similar ideal but serving an Asian dish dear to his heart — ramen.  During his research he had learned that alcohol and pasta are among two of the most profitable items a business can sell.  “And anyone can instant cook ramen noodles,” he had thought to himself, making staffing and training relatively easy.  So with great confidence he took his business ideal to his beer share group.  What did they think?  Nope. Thumbs down with the monkey wrench being in an at least somewhat cultural based incorrect assumption about American instant ramen eating habits.  Jinson and some other traditionalist ramen eaters don’t drink all the broth.  The broth is meant to be a flavoring agent for the noodles with plenty left behind when done, however, Jinson’s friends pointed out that Americans often drink all the broth and after filling up on a whole bunch of instant ramen broth, how much beer are they going to want to drink?  Grudgingly, he realized a plan B was needed.  Enter “Chef Liu.”

Another food passion of Jinson’s is Taiwanese food, in no small part due to being married to a Taiwanese native.  As serendipity would have it, a member of his wife’s family was ending a successful run as a restaurant owner in Boston and upon hearing about Jinson’s interest in opening a restaurant offered not only to help with advice but also to fly down, help with developing recipes, buying equipment, designing the space, training staff, the whole nine yards.  And Chef Liu, as this clearly amazing man is known affectionately by those around him, would only accept minimal compensation for his efforts.  We should all be so lucky to have such a person step up in our lives at an important moment but one gets a sense, rather quickly, that Jinson is a clear example that good or “lucky” things seem to happen at times to the best people.  Spend a little while in his presence in or out front of High Side and you will be struck by how many people great him warmly by name and how he greets them back by name.  This warmth and positive nature no doubt have led to Jinson establishing such a collaborative relationship with others in the NoVa beer community.

Crooked Run was an early collaboration with a sour beer named “5 Jinsons,” a play on the fact that his beer friends started using “Jinsons” to represent rating stars, as in “how much, do you like this beer?  I love it, 5 Jinsons.” What has proven to be a truly fruitful collaboration was one for High Side’s 2nd anniversary in 2020 with Back Bay Farmhouse Brewing of Virginia Beach.  In his youth, Jinson loved a coconut jam made with pandan — a Southeast Asia plant in which the leaves are turned into paste, extract, or powder and is used similar to how we use vanilla in the West.  Working with brewer Mike Pawley (formally of Cigar City Brewing and Commonwealth Brewing), the two came up with an Imperial Stout featuring pandan that was aged in Tarnished Truth bourbon barrels.  The name Panda Named Dan is a play on the use of pandan.  The exciting follow up to that collaboration is that Mike Pawley and Jinson are close to signing a lease for a space in Suffolk, VA that will become the Sojourn Fermentory, including a full kitchen.

An amazing journey to be sure.  And the name High Side?  Jinson tells me “As a DoD contractor, I used to joke about having “The SCIF Bar” inside the SCIF (Sensitive Compartmented Information Facility) but it was deemed to sensitive so I decided to use High Side instead.  High Side is a classified network inside the SCIF.  People who work for DoD appreciate it once they connect the dots.”

Visit High Side at 4009 Chain Bridge Road, Fairfax VA  22030 and online at highsideva.com.