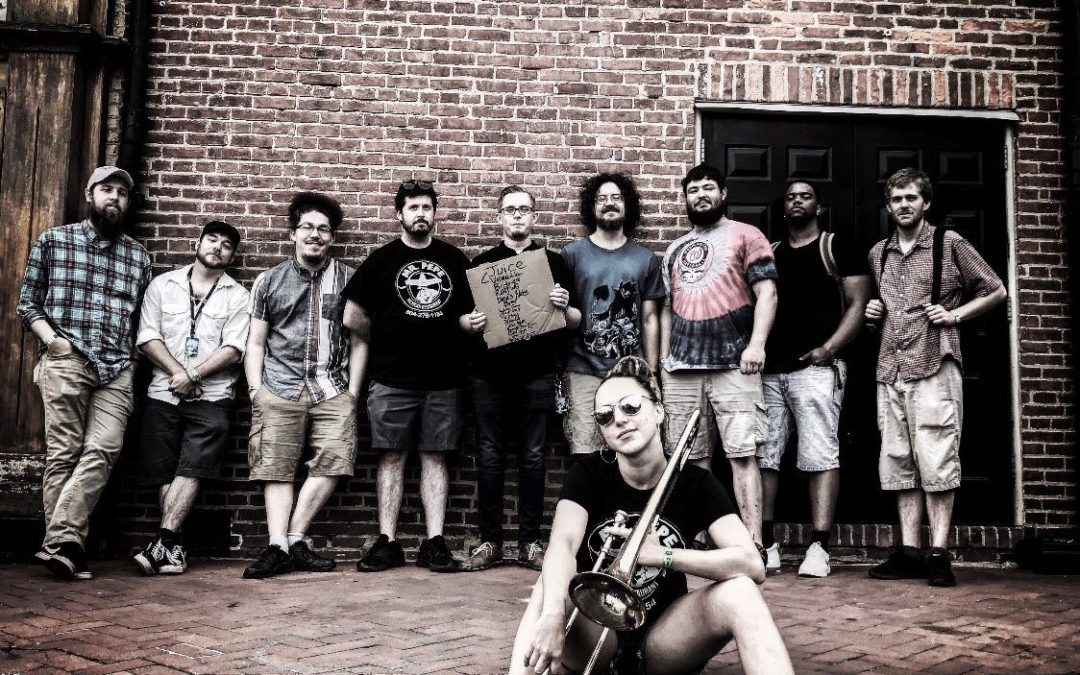 The Rockn’ to Lockn’ is a battle-of-the bands-type contest sponsored by the organizers of the four-day Lockn’ Music Festival to highlight some of the finest local bands spawned in Virginia.  While Lockn’ features many national recording artists, Lockn’ founder Dave Frey ensures that local music, food, and beer are integral parts of the festival experience. Virginia-based bands apply to the Rockn’ to Lockn’ competition, and based on several rounds of live performances and fan voting, three talented bands are selected to play on the grand main stage at the Lockn’ Festival, held August 22-25 at Infinity Downs in Arrington, Virginia.  This year’s winners are Audacity Brass Band, Surprise Attack, and Free Union.

Audacity Brass Band is composed of a group of musicians and friends whom met at Longwood College as music students. The ten members of this boundary-spanning New Orleans style funk-forward brass band are Tyler Gage, Sam Andrews, Dean Pollard, Cody Lenard, Josh Golub, Michael Velez, Colleen Trempe, Michael Eidson, Nick Gammon, and Nate Irving. If this band was a beer, they’d be an imperial stout, with complex layers of brass, jazz and hip hop that get your attention and deep flavorful notes that stir the soul. Audacity Brass Band will play on Thursday August 22, opening day.

Surprise Attack consists of Tom Casey, Jeremy Begun, Jay Rowe, Dan Durazo, and Ian Frye. The band is unabashedly jam-oriented, with optimistic uptempo songs flavored by mountain bluegrass, swirling improvisations, and psychedelia that will make you want to get up and dance. If they were a beer they’d be a raspberry wheat ale, as they have a refreshing, quaffable appeal and plenty of sweet, jammy notes that will bring a smile to your lips. Surprise Attack plays Lockn’ on Friday August 23, early afternoon.

Free Union features Michael Coleman and Rob Dunnenberger at its core, with Carrie Coleman, Jacob Ungerleider, Chris Speasmaker, Ryan Lee, Parker Hawkins, Rachel Smith, Becca Bauer, and Michael Pressel contributing. Free Union’s first EP features radio-friendly smooth vocal blends and strong R&B roots, while their live shows demonstrate energetic showmanship and a soul-pop sensibility that will funk you up. Their message is one of unity rooted in Virginia’s complex sociocultural history. If they were a beer they’d be a homebrew, created by people who care more about creativity than fitting some style guideline or genre, eschewing established recipes in order to create a unique combination of flavors with indigenous ingredients. Free Union plays Lockn’ on Saturday August 24 from 1 to 2 pm.

National acts at this year’s Lockn’ include Bob Weir and Wolf Brothers, Trey Anastasio, Tedeschi Trucks, Edie Brickell and New Bohemians, Gary Clark Jr., Jason Isbell, Old Crow Medicine Show, Moe, Steel Pulse, the Revivalists, the Allman-Betts Band, the Preservation Hall Jazz Band, and lots of collaborations among these artists, which is just one of the things that sets Lockn’ apart from most music festivals. Check the schedule to see the lineup for each day at http://www.locknfestival.com and purchase tickets.

Lockn’ single-day tickets range from $69 (Thursday only) to $139, and multi-day tickets start at $259. Student and military discounts are available. There are on-site camping options at a variety of price points including tent, car, and RV camping. Multi-day VIP tickets start at $899 and have lots of groovy benefits

We recently reached out to Farmville-based Audacity Brass Band trumpeter Tyler Gage, Surprise Attack guitarist/singer Tom Casey of Arlington, and Charlottesville’s Michael Coleman, who plays guitar and sings in Free Union to get their take on music and Virginia beer.

What are the major influences on the band’s musical style?

Tyler: All ten members write music and bring their style to the band, so we draw from rock, blues, hip hop, jazz, you name it. That being said, some of my influences are Dave Matthews Band and the Grateful Dead.  We might be the first jam band brass band.

Tom: Lockn’ is one of the main reasons why we do what we do! The collectivism of our music and improvisational style was inspired by that first Lockn’ in 2013 with bands like Further, String Cheese Incident, Widespread Panic, Trey Anastasio Band and the whole collaborative aspect.

Michael: Singer-songwriters and soul singers, the music of Otis Redding, Stevie Wonder, Van Morrison, James Taylor, Cat Stevens, and Steely Dan. More recently Prince has been an influence. I studied jazz at the University of Richmond, and also listened to a lot of rock. Our music has a lot of diverse influences so it’s hard to pigeonhole our sound. 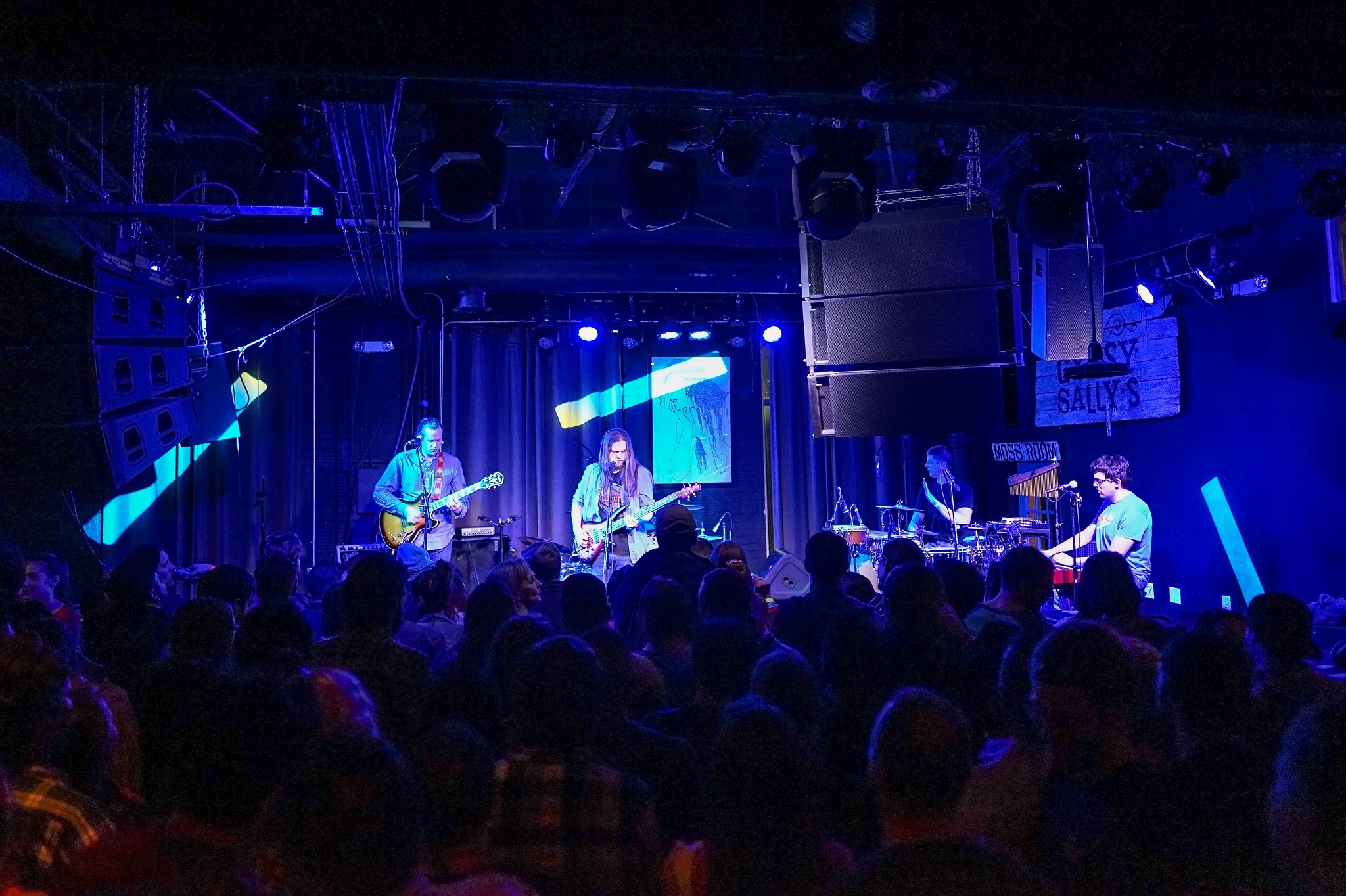 What are major influences on your beer style preferences?

Tom: Starr Hill for sure, with their Northern Lights Pale Ale. Devil’s Backbone Vienna Lager is a classic, and their Eight Point IPA is delicious. Sierra Nevada Pale Ale is the first beer I fell in love with. The initial Lockn’ was shortly after I turned 21 and there I discovered a diversity of beers that opened my eyes. I tend to favor the pale beers, in summer festival season these are ideal to quench a thirst. Pale beers and saisons are my favorites, although I am starting to enjoy some of the darker beers like stouts.

Michael: I feel like you can’t live in Charlottesville or Central Virginia and not drink beer. I don’t drink a ton of IPAs, I’m more of a lager guy. Right now in my fridge you’ll find Devil’s Backbone Vienna Lager and some of my wife’s Bold Rock ciders.

Do any of your songs have beer references in the lyrics?

Tyler :Not beer specifically, but we have a song “Raise Your Glass” about any form of alcohol. It’s about going through a rough breakup, going through the stages of grief. And saying, in spite of that, I’m still out here having a good time and partying so raise a glass and kiss that #@$%& goodbye!

Tom: One of our songs, “Pitted Crew,” is titled as a reference to what we obliquely refer to as “getting pitted” based on a friend having a few too many and the misadventures he got into.

Michael: No, maybe we should write one! However at any given show we’re likely to be sipping beers, along with water.

What does your band drink at practice?

Tyler:We don’t drink at practice because we practice on school grounds where I work! (Tyler is Fuqua School Band Director).

Tom:Lately we’ve been into the juicy, hazy IPAs, like the ones from Lickinghole Creek. Starr Hill always is around during practice al

Michael: Usually I’ll pick up a Starr Hill Variety Pack, as all the players have different preferences. I’m having the lager, others are into IPAs, so the variety let’s everybody choose what they like.

What are some of your favorite Virginia beers?

Tyler: I’m a diehard Harley rider and on a recent really hot day was riding and came upon a brewery not far from the Surry ferry, called Billsburg. They had a red ale that was amazing. I would have liked to drink another but I was riding. Also, Hardywood’s Richmond Lager and Devil’s Backbone Vienna lager are two of my favorites.

Tom:  Hardywoods beers are killer, and I enjoy drinking their bourbon-barrel aged beers. Ardent and the whole Richmond brewing scene is fantastic.  Fair Winds has brewed several saisons that I really like.

Michael: I used to live a couple of blocks from South Street in Charlottesville, and love Satan’s Pony. Actually I tend to drink whiskey, and like trying the craft spirits although I haven’t visited any of the distillery tasting rooms…yet. 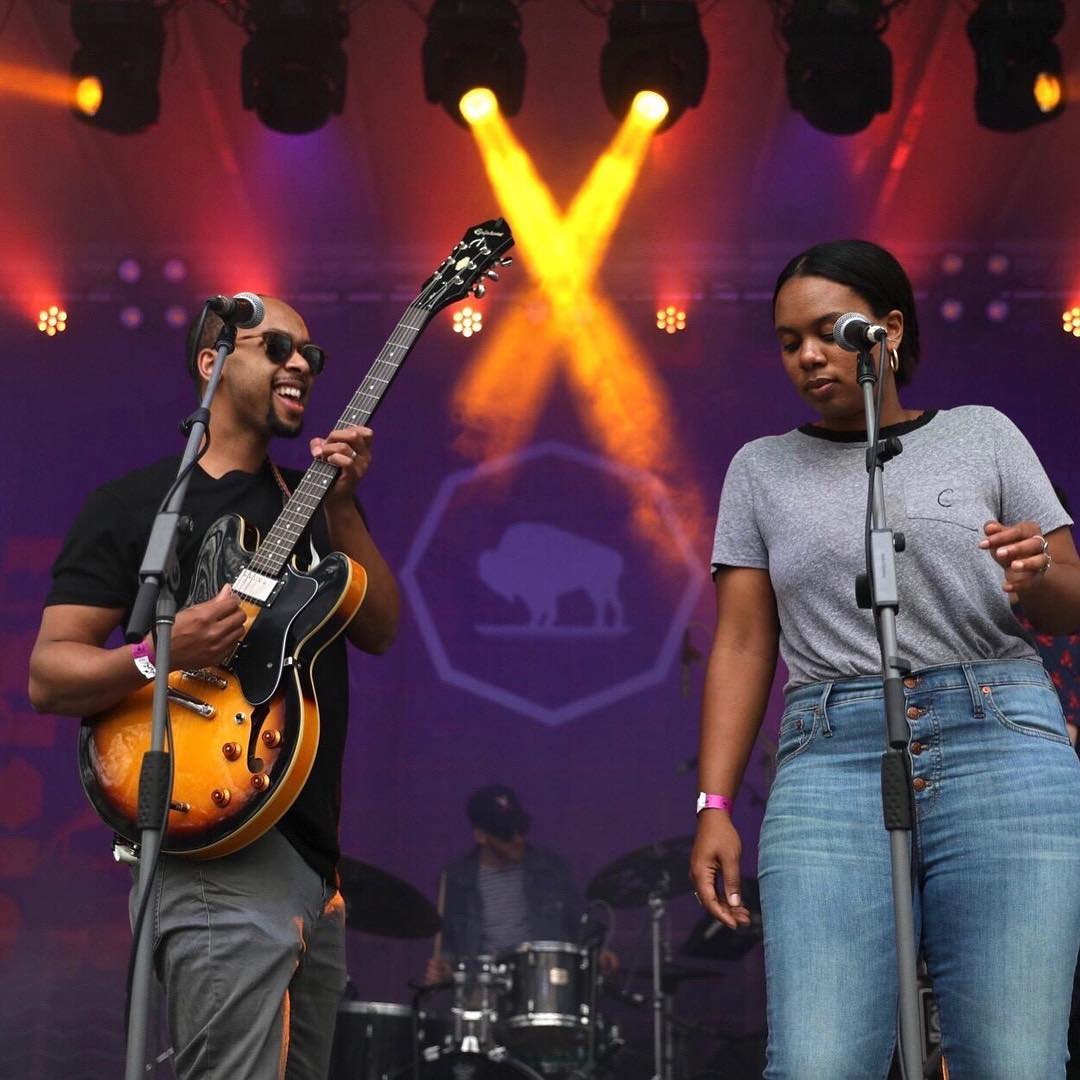 Working in conjunction with the Randolph-Macon College History department, COTU developed a series of beer releases and lectures that highlight various periods in time and their effect on beer.