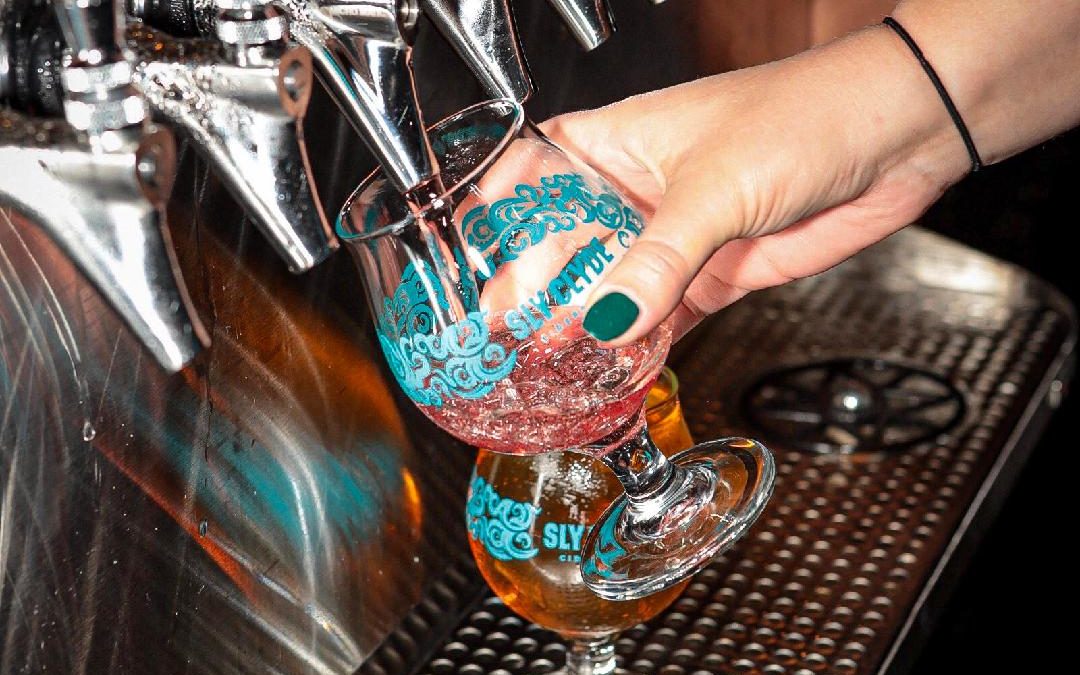 (Cider will flow in many varieties during the Coastal VA CiderFest. Photo by Michael Williams)

How ‘bout them apples?

In the last five year demand for what was once referred to as British pub cider, or hard cider, has dramatically increased across the United States and right here in Virginia.

The rise of modern cider-making in this state gained traction when Bold Rock Hard Cider debuted in 2012 just a stone’s through from Devils Backbone Brewing Company on Nelson County’s fabled Route 151, known as the heartland of the craft beer industry in Virginia.

While Bold Rock has rapidly expanded to become one of the largest cideries in the country, numerous small-scale craft cider-makers have taken root, including Blue Toad, Busky’s, Potter’s, and Sly Clyde Ciderworks in Hampton.

Sly Clyde takes an innovative to hard cider in its production of naturally flavored beverages such as Surf Hopper (herbed/spiced/hopped), Inkjet (with blackberry), and Virginia Peach.

In celebration of the official Cider Week, Sly Clyde is hosting seven Virginia cideries and producing the inaugural Coastal VA Cider Fest in the large backyard space of its tasting room in the downtown of Hampton’s Phoebus business district.

I reached out to co-founder Doug Smith to get the latest.

Virginia Craft Beer Magazine (VCB): How did the idea for the Coastal VA Cider Fest come together?

Doug Smith: We are the only cidery east of Richmond. It made sense that we would create what we hope will be an annual cider festival during Cider Week to celebrate what is Virginia’s truly great craft beverage.

We have seven cideries that’ll be with us.

VCB: Virginia has been long famous for its quality apple products, but cider making in Virginia really surged right after the craft beer boom began almost ten years ago. Can you share your perspectives on how the cider industry has rapidly expanded and in some respected ridden on the coattails of craft beer’s popularity?

DS: Cider is really experiencing a resurgence across the United States. It’s what helped the colonies all the way back to the time of Williamsburg survive.

Cider’s not new to Virginia, it’s just experiencing a resurgence.

We certainly have benefited from craft beverages and an interest in drinking more locally. As alcohol producers started thinking about traditional recipes we have seen a significant increase in the number of cideries in Virginia.

VCB: Were you a fan of British hard ciders before launching Sly Clyde?

DS: We certainly were aware of what is sometimes referred to as the heritage cideries. Those are the single varietals, whether it’s out of Great Britain or France. Many of those ciders have distinctive characteristics.

What we’ve done in creating Sly Clyde is create a modern style cider. It has a very American spin on the beverage. Ours are nearly as funky and yeasty as some of the ones in Europe.

Now, that being said, there are cideries moving towards those heritage brands of apple and heritage tastes around Virginia.

Sly Clyde is really a modern cidery creating flavored ciders for a much broader audience.

VCB: Like a brewery, Sly Clyde experiments with many different flavors. Part of tis approach is to keep your consumer base engaged and coming back for what’s new, isn’t it?

We’re always looking to really develop and bring out excitement around cider with different flavor variations. One of the things that may unique about Sly Clyde compared to larger national brands is we don’t use any concentrate. We are using 100% Virginia apples. The intension is to flavor the ciders in a modern way but still make sure it’s the apple that’s leading.

That why for something like Inkjet, which is an award-winning cider, people will often remark it doesn’t taste like blackberry on the front-end, but they get both blackberry and mint tastes on the back.

The reason we do this is we simply don’t want to be slapping people in the face with concentrated flavor and an overly sugary drink.

What we want to do is create something that’s an experience for the consumer and really give people something to talk about while they’re together enjoying a beverage.

VCB: From when you first started your business model and projected where Sly Clyde would be in the first three to five years, have you already exceeded those forecasted expectations or are you right on track?

DS: We are 14 months into what we think of as the start of Sly Clyde. We started in August of 2018. It would be fair to say we are already working on year three plans and volumes.

We were able to meet an unmet need with local cider and really good cider. The community as a whole has really rallied behind Sly Clyde.

VCB: How are sales in the taproom verses what you move in packaged product in the marketplace?

DS: We have an incredibly robust experience in the taproom. It’s driving vastly more sales than we expected and we are now distributing in Virginia, North Carolina, and in Europe.

VCB: Where in Europe?

DS: We’re going through a distributor in The Netherlands. They’ve had several orders from us and we expect they will continue to expand the footprint in Europe. They import into The Netherlands and then they distribute to shops in central Europe.

VCB: Which brands are you exporting?

DS: That’s a good question. They will take as much as we will send them.

They really love the Inkjet, Submersive, and they took tons of our Reserve Series — Gold Rush and Stayman & Rome.

VCB: When you look at Bold Rock Hard Cider and the success they’ve had, how do you draw a distinction in products, with Sly Clyde being more craft, small batch? Are they complementary to Sly Clyde or do you see them as stiff competition vying for space in retail and restaurants?

DS: Whether it’s Bold Rock or Angry Orchard or Crispin, all of these massive brands have really made a name for themselves and introduced people to cider.

Bold Rock is the number two cidery in the United States.

Sly Clyde doesn’t aspire to be the number one or two cidery in the country. Angry Orchard and Bold Rock can have that space.

We’re very focused on local, craft, modern, interesting ciders that people like to gather around and to share. As long as we are continuing to satisfy customers we’re going to be happy for what we are.

We do hope to continue to expand, but we will never be eager to get cider into Oklahoma or Montana. These are not our aspirations.

Tim, my brother and business partner, really just wanted to do something in Hampton Roads to lift up the idea of a coastal cider. I think we’ve really been able to do that with Sly Clyde and we’re just scratching the surface.

VCB: Sly Clyde has been a part not only of the rebirth of cider, but also the renewed vibrancy of downtown Phoebus. Can you comment on that?

We are very familiar with Phoebus. We love Phoebus. We were quite concerned to see that Phoebus was struggling for an identity within Hampton.

When we decided to make this investment in Phoebus one of the reasons we were doing that was to really tell other people in the community that Phoebus was ready to grow and expand, and become a lot more funky than it has been for the last 20 or 30 years.