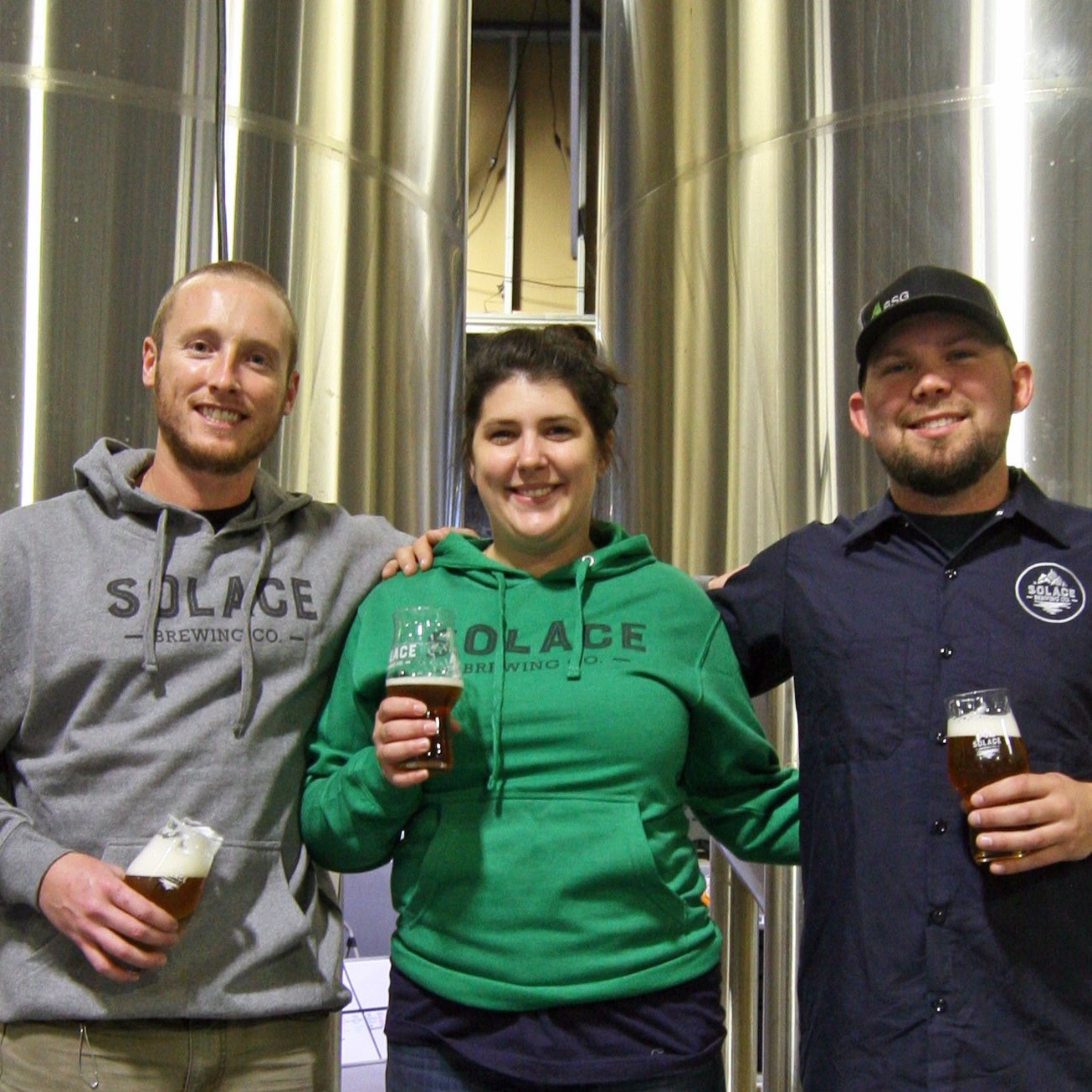 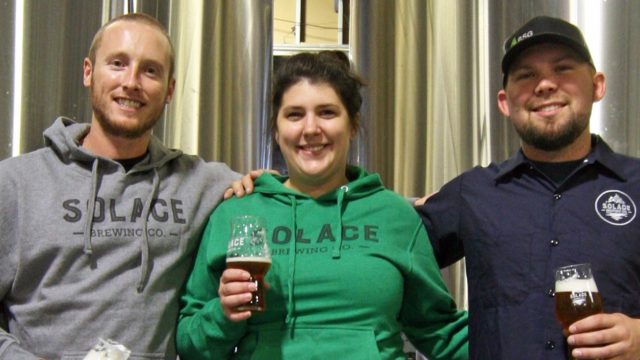 There is a feeling you get when you walk into a place and in relatively short order you realize the place is nice, well-designed and cared for. You notice the people working there are enthusiastic, genuinely like each other and are creating a product they enjoy and take pride in. Solace is such a place, and in the end, I came to consider the name ironic because, damn, if they don’t seem some pretty satisfied brewin’ folk who work in a brewery that might be better named Field of Dreams Brewing.

Coulda sworn it is heaven.

Ok, that might be a bit of an exaggeration, but for now the motto remains “Find Your Solace.”

“We crazy over-engineered the floor,” said head brewer Drew “Wiley” Wiles. I add that to the notes about the over-engineering of the chiller, and the air-compressor, and the boiler.

“Getting the engineering correct and having in place a brewing process that is executed consistently, that’s what I’m OCD about,” said Wiles.

He and lead brewer Bridgette Turner both mention that the glycol system is already ready to handle eight additional tanks and that 80-barrel fermentation tanks are in discussion for future expansion.

Solace has over 15,000 square feet of space, with roughly 5K of that dedicated to the tasting room and 10K dedicated to the brewing space. This baby has some serious growth potential, and part of the need for that growth will come from the intent, as Bridgette tells me, to “not be just a great tasting room but also be well-distributed.” The efforts of each of the owners – Drew, John Humerick (director of operations), and Mike Arms (director of finance) – towards this goal have so far resulted in over 100 accounts from Purcellville, VA to Washington D.C.

Solace’s makes its home in a new building that didn’t even have a roof when the fellows first laid eyes on it, though it was big, modern, and conveniently located almost halfway between Drew and John’s houses. They signed a lease in October 2016 and opened to the public in June 2017.

The impressive facility sports a 20-barrel brew house outfitted with four 40-barrel fermentation tanks and one 40-barrel bright tank. The system is new and was bought from Craftwerk Brewing Systems out of Detroit, Michigan.

As is most often the case, the paths that brought Bridgette, Drew, Mike, and John together were varied. John managed company-wide operations at a home healthcare company. Mike went from public accounting to executive at an IT Company. Drew was a genetic medicine researcher whose family founded Paradise Springs Winery in Clifton, VA – the first farm winery in Fairfax County. And Bridgette had bartended for years when, during a “figure out what I want to do with my life” staycation, she saw a Samuel Adams commercial on TV that gave her an “a-ha” moment which lead to her researching how to get into the beer brewing business. Fate seems to have played a role in bringing three of them under the same roof when Bridgette, John, and Drew all ended up working at Sten Sellier’s Beltway Brewing in Sterling, VA. Bridgette worked in the tasting room and volunteered back in the brewery. John became director of operations, and Drew became the quality assurance/quality control manager and set up Beltway’s brewery lab. John and Drew became very good friends while working under Sten, with Drew overseeing production and John overseeing financials.

After 6 months, with Sten’s support, Bridgette left for the Brewlab Training and Analysis Services in Sunderland, England, where for 12 weeks she trained to be a brewer. She was the only woman student and finished first in her class.

After returning, Bridgette worked full-time in the Beltway brewery for a couple of years before taking a job in Florida as a brewer at Tampa Bay Brewing Company. In her heart, however, she knew she was likely to return, saying perhaps “it was naughty of me” taking the Tampa Bay job knowing it would be a relatively short stint.

She stayed in touch with John and Drew as they eventually left Beltway, teamed up with Mike, and began looking for the brewery space that would become Solace.

When Bridgette did return, the lease for Solace had been signed and that crazily over-engineered floor was being finished. Drew handled the brewing of the first four beers, but Bridgette has been the lead brewer on every beer since.

The first beer she brewed was called “Long Vacation” as a humorous homage to her time away in Florida. She thinks it was helpful to have that time at Tampa Bay Brewing as it meant she was the only one in the group who had brewed professionally somewhere other than Beltway, and showed her that successful businesses can have significantly different approaches to the same process.

As for Solace-brewed beers, their stout, session IPA, wit, and brown ales have been the staples. Quickly gaining popularity is the lager. Beyond that there is often a seasonal beer and at least an additional IPA/DIPA or two. The brewing philosophy at Solace is that they largely brew beers they enjoy and which are “fairly approachable.”

For their barrel-aging program, Solace recently had eight Cabernet Franc barrels from Paradise Springs Winery in which they were aging some of the Manhunt Stout. Next up will be aging some beer in bourbon barrels and doing a number of kettle sours. Canning is on the horizon and eventually bottling a few beers, such as high-gravity and/or barrel-aged beers of the types appropriate for bottling in 750ml bottles.

Solace joins a cluster of craft breweries within close proximity. It is just 3 miles from Ocelot Brewing, 7.3 miles from Lost Rhino Brewing, 7.5 miles from Mustang Sally Brewing, and 9.5 miles from Crooked Run and Beltway Brewing. This community of breweries also help each other out. As an example, Jasper Akerboom of Lost Rhino has provided Solace with yeast. Being part of this brewing community is a slice of heaven.

“For me, it was the greatest thing ever,” said Bridgette.