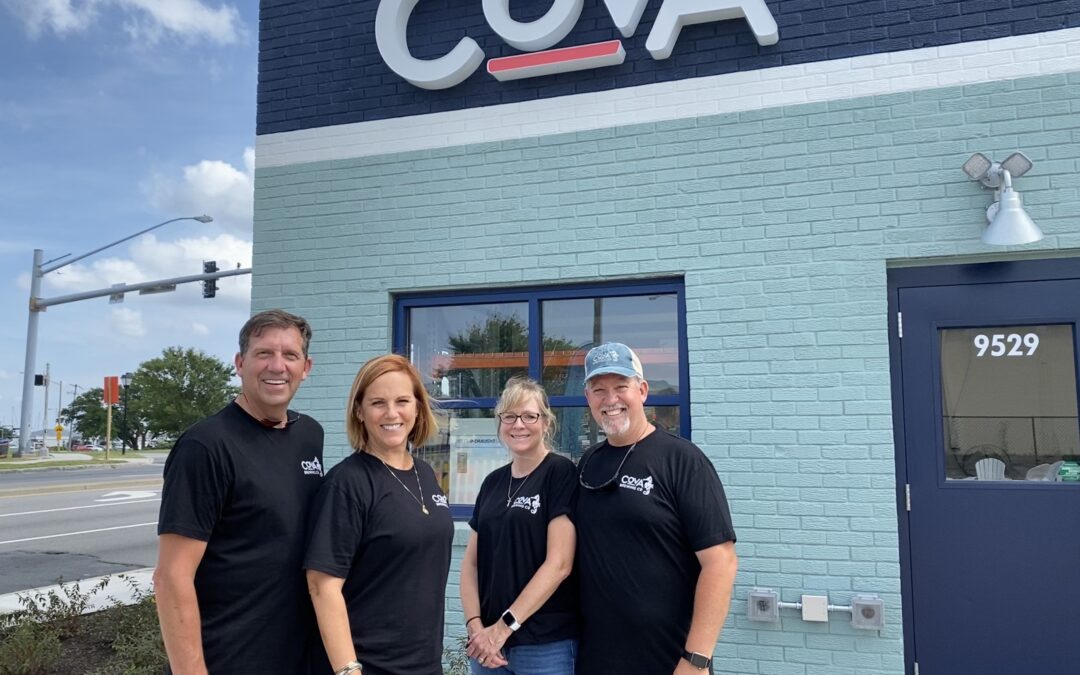 To brew or not to brew? That is the question.

For Scott and Susan Bateman, the answer was “two brew.” Blending the family’s love of craft beer and daughter-in-law Corrie’s barista experience, they decided to open a brewery where they could brew both beer and fine coffees in the Ocean View section of Norfolk. COVA (short for “Coastal Virginia”) Brewing Co is at 9529 Shore Drive, across the street from the marinas near East Beach and Joint Expeditionary Base Little Creek.

Scott and Susan are both Norview High School graduates, and Scott is an ODU alumnus, class of 1985 and a Theta Chi. Back in 2017, the Batemans were sitting in a brewery in Norfolk and thinking about the need for a brewery in their native Ocean View. Like many homebrewers, they had a dream of opening a brewery, and at that time Ocean View was a ‘craft beer desert’ without a single brewery or craft beer bar. Scott and Susan took a leap of faith and decided to open a hybrid brewery-coffee bar that would give the community a place to sip their beverage of choice. In addition to beer and coffee, COVA has wine, cider, and delicious homebrewed kombucha.  They are family friendly, pet friendly (outdoors), and even wine-drinker friendly.

Partners Phil and Karla Smith are relatively new to the neighborhood, having relocated to the Norfolk area from Ohio. They learned about the Bateman’s vision and joined forces to help make the dream a reality. Phil’s dad is a part of advertising history; perhaps you’ve heard some of the slogans he did for Miller Brewing, like “Tastes Great, Less Filling” and “Everything You Always Wanted in a Beer and Less.” Pretty cool, huh? That’s, like, beer-famous!

The highly skilled artisans at Spacemakers did the build out, and this former tire supply shop now boasts a gleaming seven-barrel brewhouse, a light-filled tasting room with blond wood tables, self-serve taps, and a coffee bar. The interior is bedecked with subway tiles in white and a pale aqua-mint reminiscent of sea glass or clear Caribbean waters. Outside is a very spacious seating area with well-spaced picnic tables, Adirondack chairs, high-top four-tops, and a covered patio.

Every brewhouse needs a brewer. Matt Topping was Head Brewer at Coelacanth Brewing, and after that brewery’s demise he found a home at COVA. We’re happy to say that Matt is doing a fantastic job and the beer at COVA is delicious. In early July four of their beers were on tap; a Pilsner, an IPA, a gose, and a coffee stout.  There was also an Extra Special Bitter collaboration with Elation Brewing, a Blue Toad Hard Cider, and a session IPA from Brothers Craft Brewing. While the specific beers will rotate and vary, they plan to always have the range of styles cover light, hoppy, sour, and dark. We were delighted with the quality of the beers.

The Pilsner is crisp and clean, and sessionable at under 5% ABV.  An easy-drinking, beautifully balanced, well carbonated people-pleaser of a beer. Great before, after, or instead of the beach.

The IPA was a knock-out. With four pounds of Comet and Citra hops per barrel, it has a lot of hops flavor, moderate bitterness reminiscent of grapefruit, with tropical notes.  While billed as a West Coast IPA, this hazy drinking companion would fit right in with the New England-style crowd. If you’re a “hops head,” this is the beer for you. If you’re not, it might convert you.

The passionfruit-lime Gose was tart and tasty. It had the requisite pucker-factor but was more approachable than many. If you are a sour fan, you will want to try the gose.

The Coffee Stout was outstanding. This isn’t a heavy imperial-type stout but is lighter-bodied than you’d expect, with a hint of roastiness, moderate coffee flavor, and wonderful coffee aroma. It would be a nice breakfast stout any time of day.  There is a regular version on tap as we write this and also a nitro version.

Speaking of breakfast, this is the first brewery to our knowledge in the region to open in the morning for the coffee-crowd. The fancy Italian LaMarzocco espresso machine will provide the brew for a killer latte, cappuccino, mocha, macchiato, etc. There are homemade chocolate, vanilla, and caramel syrups, and cow, soy, oat, or coconut milk. It’s a real coffee bar, with a few nibbles in the case like muffins, cupcakes, and large German-style pretzels. Chris had an iced caramel latte which he thoroughly enjoyed, and Diane relished a hot latte. You can get a regular drip cuppa joe, or hot chocolate. The coffee served at COVA comes from a gourmet roaster, Counter Culture, of Durham, NC.

The tasting room at COVA is unique for a brewery in our region as it is self-service. You receive a plastic card that you place in a slot above the tap-handle. The screen tells you about the beer. You open the tap and pour your own beer. We love choosing exactly how much of a beer to drink rather than have ‘set’ serving sizes. You can pour yourself a full glass, an ounce, or anything in-between. When you are ready to leave, you turn in the plastic card and pay by the ounce.

In these COVID days, with our collective awareness of fomites at a heightened state, aren’t there risks in letting us put our hands on the taps? The nice folks at COVA have expertise based on experience in the health care industry and have taken steps to minimize these risks. When you enter the building, you’ll need to have a mask on; if you don’t have one, they will sell you one for a buck. Next, you’ll be directed to wipe your hands with hand sanitizer. You will be given the plastic card which operates the taps. You’ll get a clean glass and proceed to the dispensing area. Staff will then instruct you on how to pour a beer without touching the glass to the tap. The tap-handles are made of copper, which can be a germicide. In addition, the tap, the top of your glass, and your plastic beer card are all under a UVC light; the ”C” wavelength of UV light won’t harm you, but is a known germicide. You get a fresh glass for each beer. No re-using the glassware.  So, actually the COVID risk would seem to be either the same or less risk than being served by another person.

Do check out COVA Brewing in Ocean View. You’ll be glad you did!