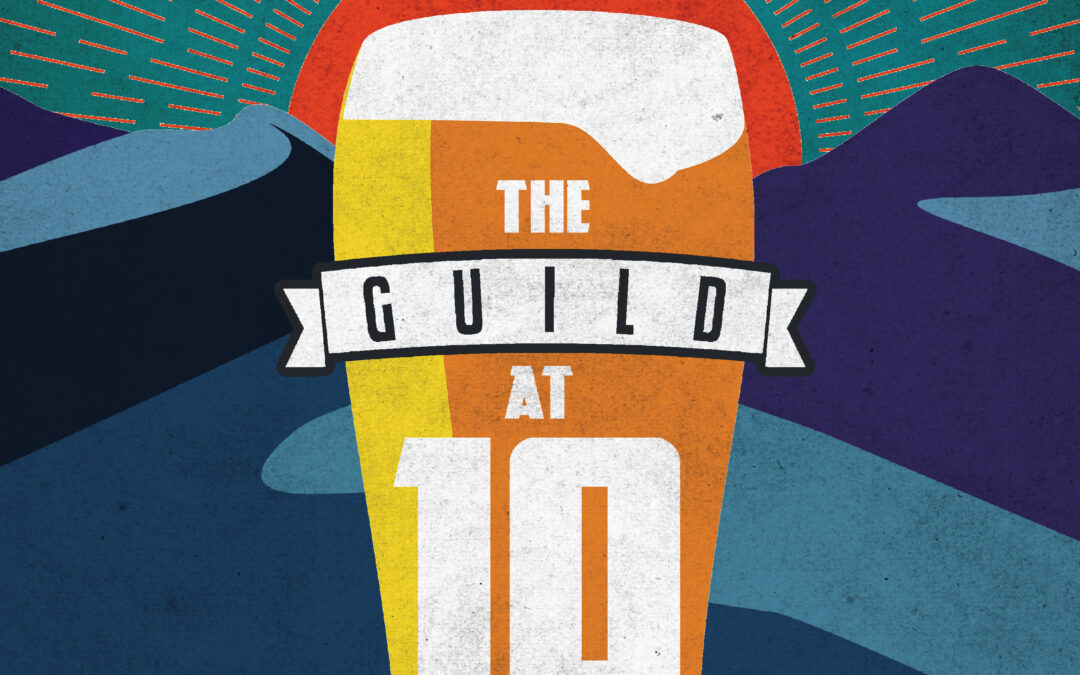 This year marks the 10th anniversary of the Virginia Craft Brewers Guild’s formation. All of its original mission objectives have largely been accomplished, and certainly there is much to celebrate as we look back and peer into the future.

Can you share your memories on how the Virginia Craft Brewers Guild got its start?

Brett Vassey: In July 2010 we began to see the growth of craft beer. Brian McNelis (retired CEO of Starr Hill Brewery) and I went on a road show for most of 2010 meeting with brewers, owners, and prospective brewers. We did research on the former Mid-Atlantic Brewers Association, which had failed.

We then got an introduction into the Brewers Association and an understanding on how they provided support.

In that process we met Mike Killelea, who was at Legend Brewing. Mike wanted to start a Guild and had already started to talk to some of his peers.

We all came together around a business plan with a common set of goals, primarily around government affairs and marketing.

We founded the Guild to launch in January 2011 with 11 members.

Janell Zurschmeide: Joining the Guild as Dirt Farm Brewing, a brewery in planning eight years ago, I was able to witness the small group of passionate craft beer pioneers…I still remember the 11 founding members and their tremendous enthusiasm. It’s because of them; they saw the need for the legislative changes that would ensure the growth of craft beer in Virginia that we are here, where we are today.

In your view, what have been the Guild’s key success during its first 10 years?

Bill Butcher: I believe the biggest success that our Guild has had is the push to pass SB604, which allowed Virginia breweries to pour pints for customers in our brewery tasting rooms. This was a game changer for our industry, and it helped develop brewery tourism and expand the tax base for the state. It also helped Virginia develop a craft beer culture and put us on the national map as a craft beer destination.

Another major success has been the Virginia Craft Beer Cup. This competition has evolved and grown into a pretty big deal. I remember the first one in 2012, there were about 34 beers in the competition, and it took about 10 minutes to announce the winners and hand out the medals. Now it is a major event, drawing hundreds of entries from all over the Commonwealth, and has put a spotlight on the high level of quality of Virginia independent beer.

Janell: SB604, for sure, is on top. The “pint law” has allowed the incredible expansion of breweries that allows for a true taproom experience and they’ve become assets to communities all around the Commonwealth. The Farm Brewery Statute opened enormous possibilities for farmers and brewers to blaze the trail bringing “plow to pint” products as an added sense of place to our countrysides.

Brett, was SB604 the number one objective in the beginning?

Self-distribution of some form was part of the original design. That was a driving force. It was giving independent breweries an identity and a voice; organizing them around key governmental affairs legislation, really trying to elevate attention to independent craft beer in the marketplace — these were all three goals when we started.

We didn’t know on January 1, 2011 what form of self-distribution would end up like. It wasn’t until we went through the business model of brewpubs and looking at other states’ tasting room-based breweries that it became immediately apparent the most profitable, fastest way to grow the industry was to enable unlimited tasting room sales. We knew we had to change the law. That’s the way SB604 came about.

SB604 was signed into law by Republican Governor Bob McDonnell, and the craft beer industry has been supported wholeheartedly by Democrat governors ever since. Is craft beer’s non-partisan attributes part of its success in the eyes of the Guild?

This is this very purposeful design of the Guild in making sure both parties understand and benefit from craft beer without it becoming a partisan industry and the regulation of beer. We try to be very deliberate, and we’ve been so fortunate as an industry that we’ve had broad bipartisan support.

Governor McDonnell signed SB604 at Hardywood in Scott’s Addition. He allowed us to come on the (Governor’s Mansion) property to do our annual August craft beer celebration.  Every governor since has been incredibly supportive, most notably Terry McAuliffe.  Under McAuliffe,  we clarified the role of the Department of Health and Department of Agriculture & Consumer Services as to who regulates the restaurant space at a brewpub and who regulates the brewery in a packaged brewery or tasting room brewery.

From your business perspective, how do you see the current state of the craft beer industry? What are the opportunities for growth and/or potential threats?

Zurschmeide: We are “stabilizing” after COVID-19. Virginia lost 6 breweries in 2020. Opportunities for growth are in expansion breweries, expanding markets in Southside and Southwest, and farm breweries.

Butcher: From our perspective, the current state of the industry is all about recovery from the COVID-19 pandemic. The closure of restaurants across the country has obviously been devastating for their industry, and it has been tough on small breweries like us which rely on sales of draft beer to those restaurants. The recovery is underway, and will continue, but it is not a quick and easy fix. We anticipate that it will take well into 2022 for our keg sales to fully recover.

Recently, social media sources have revealed alleged sexism and harassment in the workplace across the brewing industry. What steps should the Guild take in addressing these issues as well as diversity as a collective industry?

Butcher: While it is troubling to read these stories, and learn of these instances of harassment and sexism, I am glad to see these stories come to light. It is important that victims have a way to be heard, and hopefully it can lead to change. I would like to see more breweries hiring and promoting women and people of color to senior positions. The Brewers Association has implemented a mentorship program to help this effort, and I’m proud that members of our team have been selected for the initial cohort. It is an important step, and our industry needs to invest in these efforts.

Vassey: One of the most important roles the Guild plays is professional development and education. This falls within that. The issues involving diversity, inclusion, sexual harassment, and sexism are all part of making sure you have a safe workplace.

One of the ways we have done that over the years is our own quality and safety qualification. We’re the only Guild in the country that has that.

As a practical solution at our annual Virginia Craft Beer Conference we hold in July we have a complete workshop on this issue; it is diversity and inclusion sessions. Dr. J Nikol Jackson-Beckham is the instructor. She is the Brewers Association’s Equity & Inclusion partner.

What should the Virginia Craft Brewers Guild focus on in the coming year to 5 years?

Zurschmeide:  While the craft beer market continues to grow, its challenges come from the competition, “crafty” brand confusion, other alcohol category competitors, and distribution and retail challenges. We will work to expand authentic independent craft beer branding with consumers through the BA’s “Independent” label, and VCBG’s programs to ensure economic growth and move Virginia’s ranking into the “Top 10 U.S. States for Breweries Per Capita.”

Butcher: I think we need to find ways to encourage a more diverse base of craft beer drinkers, and continue to diversify the industry. I would also like to see the Guild continue to provide training and programming for its members to continue to develop their beer quality, as well as promoting and training for worker safety in the brewery.

Vassey: One of the big issues for us in the future is continuing to focus on how to introduce craft beer to non-craft beer drinkers. That has become the basic theme of our marketing and tourism activities. That would include all of our beer festivals, promotional activities and beer media. That is a fundamental of our future.

We see an opportunity to expand our partnership with NASCAR. We are in discussions to expand beyond the Richmond market to Martinsville and Bristol.

We love competition and we love to partner with our peers in the other space. So we are in discussions with North Carolina to do a Battle at the Border with Virginia and North Carolina independent craft breweries at a joint festival where we would invite beer enthusiasts to come. We think that’ll be a very novel idea.

Another big piece of what we want to accomplish in the next two years is related to the Outdoor Refreshment Area legislation that we helped craft. It was passed this year but didn’t end up the way we wanted exactly. Our desire is to help localities that want to support craft beer create local ordinances and designate certain geographic areas for permanent  outdoor refreshment as a way to create more interest in craft beer tourism.

So you could walk brewery to restaurant to brewery with your beer in-hand that would be a real entertainment district. We’ll work on that for 2022 and 2023.

We also see real opportunities for investment and growth in Danville, Roanoke, Lynchburg, and Bristol. And farm brewery growth. We see that as the next big wave of investments and we want to help facilitate that.