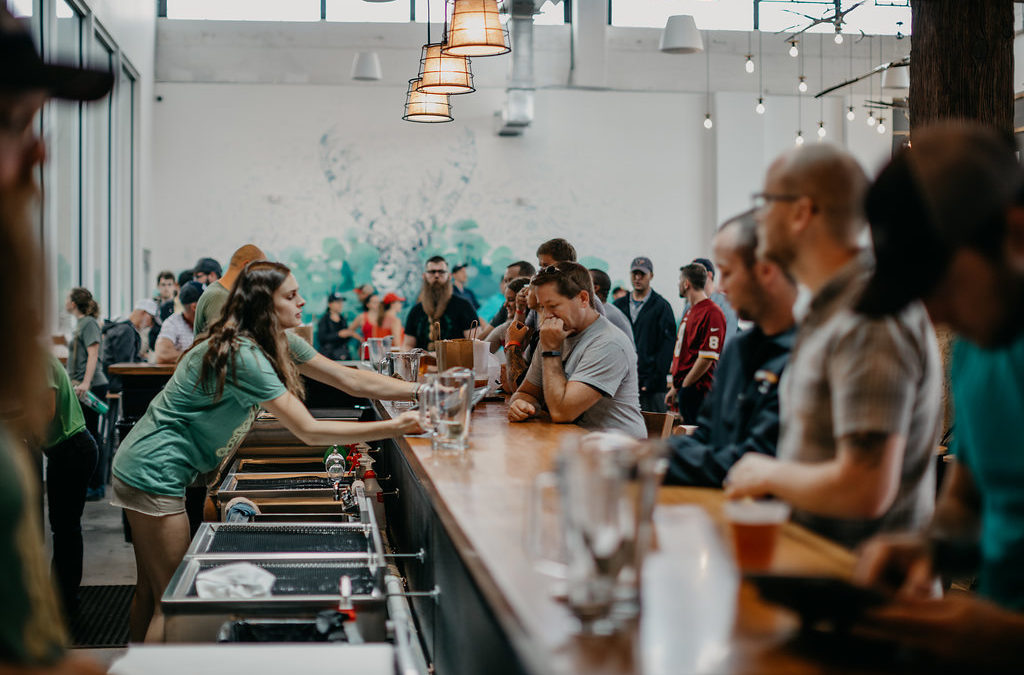 Breweries, like people and other businesses, adapt and change. You may drop in to a brewery from time to time – or see a friend around town – but unless you go deep, you may miss significant changes.

I first interviewed Väsen Brewing co-owners and cousins Joey Darragh and Tony Giordano in July 2017, just before the Richmond brewery opened. I’ve visited Väsen Brewing in Richmond multiple times since then, but I wondered how much had changed behind the scenes.

I met with Darragh in early July to catch up.

As a little background, Giordano and Darragh grew up in Northern Virginia. Giordano moved to Colorado, where he worked for Boulder Beer Company, and Darragh to California. When they decided to scratch the itch to move back, closer to family, they decided to open a brewery.

“In visiting Virginia over the years, it seemed like all of the beers that we were enjoying out west were eventually going to make it to Virginia,” recalled Darragh. “It was just a matter of time before things like sours and farmhouse beers grew in popularity, so we saw it as an opportunity for us to get ahead of that and try to become one of the breweries that is most closely associated with those styles of beer in the state.”

The branding at Väsen has a Scandinavian focus to celebrate the cousins’ heritage: “väsen” means essence or spirit in Swedish, and the beers were to have a Northern European väsen: farmhouse beers and sours, plus Belgian and German styles.

THE SPIRIT OF VÄSEN BEERS

But popular beer styles don’t stay static; nor has the Väsen line-up. “We’ve branched out a bit since we first opened,” said Darragh. They still use two 80-barrel wooden foeders, visible from the tasting room, but they’ve expanded the selection, too.

The tap list includes darker beers and lagers year-round. By volume, crowd favorites have been the Läger, the house double IPA and the Norse double IPA. “But in terms of excitement, it’s beers like Smoked Blood Peach Sour, a very unusual and very strange flavor combination that works,” Darragh said. “The sours in general stir a lot of excitement because we’re trying to do unique flavor combinations.”

The Triple Berry Sour is another crowd favorite, especially among the bar staff. “A lot of these beers that we bring back for a second or third round, it’s usually because our bar staff asks for it, and sometimes they’re the proxy for the customers.”

Väsen’s biggest change is the addition of IPAs. “We opened with no IPAs,” Darragh said. “We told ourselves, we’re never going to make a traditional IPA … on a large production scale.” Customers would ask for a hoppy beer, but bartenders would suggest something similar.

Then they discovered kveik, a Norwegian yeast passed down from generation to generation in traditional farmhouse brewing. “It was different enough that we felt like we were branching out into our own version of IPAs … It had that Scandinavian connection, and the Norwegian kveik yeast is a farmhouse yeast strain, so it checked all the boxes for us and ended up making incredible hazy IPAs.”

From the start, Väsen has had an in-house scientist, Jon Warner. Given the brewery’s dozen-plus strains, Warner spends much of his time propagating yeast. Darragh said they hope to bring on additional staff in the next year or two so Warner can pursue other experimental avenues, including more cultivation of wild yeast and bacteria.

“We’ve already done a few trips around town and into the mountains and collected random samples,” he said, “and we got some things that seem like they have potential. They’re sitting in storage waiting for us to have the bandwidth and resources to really experiment with them.”

In the brewery, additional small fermenters have been added for use with the small-batch pilot system and wild beers, and the brewery still has room for growth. Väsen began canning in May, which expanded its distribution beyond kegs, festivals and limited-release bottles. Besides Richmond, beers now reach Charlottesville, Hampton Roads, Northern Virginia, D.C. and Fredericksburg.

A PASSION FOR THE OUTDOORS

From its inception, an important component of Väsen was an environmental focus, in practicing sustainability and in promoting the outdoors. The 20-barrel brewing system was designed to be environmentally friendly, and they’re looking for opportunities to become even greener.

The tasting room, which hasn’t changed much in two years, reflects the outdoor theme. In the center sits a faux tree and boulder with bar seating. One side of the room contributes a beer hall feel, with tall ceiling, communal tables and a wall mural by Emily Herr of a caribou, plants and petroglyph-like symbols. The other side houses the service bar and cozier seating, with a cabin-like feel.

Väsen’s initial intent was to connect with local individuals and small organizations related to their mission. Accordingly, they’ve homed in on partners such as Keep Virginia Cozy, Blue Sky Fund and James River Outdoor Coalition and sponsored clean-ups and outdoor competitions.

Väsen also initiated the Vagabond program, enlisting outdoor sports enthusiasts as brand ambassadors. “We’ve got an amazing group of folks participating in that right now,” said Darragh, including an ultra-runner, climber, triathlete, guide and hiker. The program continues to evolve, as the athletes carry the Väsen name out on their adventures and onto social media and volunteer at brewery events.

“Now that we’ve put our beers into packaging that’s a little easier to take,” said Jamie Frieling, Väsen brand director, “we’ve had some groups take our cans to Colorado and Idaho … states we might not be able to [reach].” Väsen is also ordering new branded stickers and patches featuring outdoor activities. “Sometimes you’re not able to drink a beer when you’re climbing a very intense wall,” she laughed, “but you can have a sticker on your water bottle.”

Whether a close friend or a business, it’s nice to catch up. And it’s gratifying to hear, as with Väsen Brewing, of positive adaptations and continued growth.V