Views and Brews High Above Bluemont at Dirt Farm Brewing 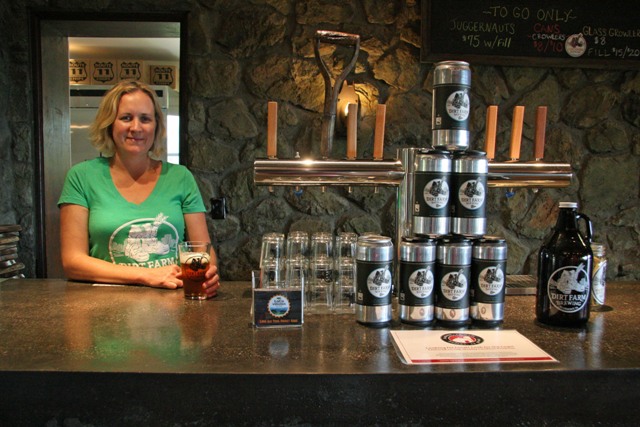 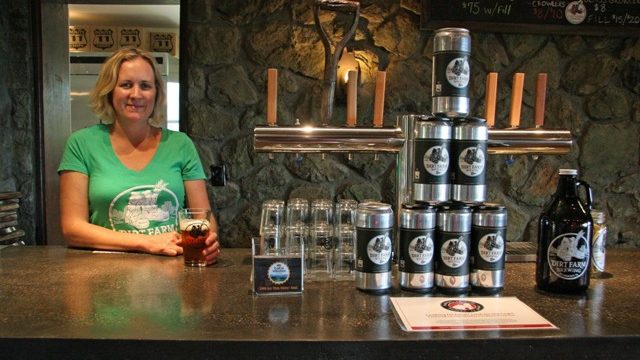 (Janell Zurschmeide behind the bar in the Dirt Farm tasting room)

Travel out to the far western edge of Loudoun County and you will find yourself in a region that knows the name Zurschemeide well. That is what happens when you run three popular businesses – a farm, a winery, and now a brewery – in a manner that seems to celebrate family, hard work, creativity, and fun all in great measure.

The farm came first, and to quote the Great Country Farms website, “The Zurschmeide Family has been farming in Loudoun County since the 1970s and Great Country Farms was started by the second generation of Zurschmeides in Loudoun in 1993. The farm started with a Community Supported Agriculture Program (CSA) which has grown over the years and delivers produce to homes as far as Alexandria and Arlington.

In 1996, and again in 2007, the Loudoun County Chamber of Commerce voted Great Country Farms “Agribusiness of the Year” for its unique efforts to farm in a difficult climate through innovation, rather than selling out and growing houses.

“We are thrilled to still be a family farm in our growing county!”

Next up was the winery. From the farm, Mark and Bruce Zurschmeide would look up at the mountain and think about growing grapes and having orchards. In 2003 the family was able to purchase 100 acres and in 2006 Bluemont Winery opened for business. The family had no previous winery experience but brought-in Doug Fabbioli, co-founder and winemaker of Fabbioli Cellars, to help out as a consultant, a productive arrangement that continues to this day.

As Bruce tells me, “Doug still holds our hands from time to time.”

The winery now grows seven varietals of grapes and produces about 6,500 cases of wine a year.

Bruce and his wife, Janell, will straight up tell you that during this timeframe they were not beer drinkers. In fact, when they bought the 100 additional acres that are now the brewery, the thinking was to open a second winery. But as it happens, it was a visit to Dogfish Head Brewing and a case of Tweason’ale that changed their thinking (the couple were in a gluten free mode at the time and Tweason’ale is a sorghum based beer with buckwheat honey).

Riding back from Delaware on Route 50 the couple started talking. They had done the wine thing already. What about a brewery, especially given the seemingly never cresting craft beer wave? A couple of phone calls to see who would be onboard with the plan and suddenly they were talking possible brewery names. As Janell tells me, she and Kate (Bruce’s brother’s wife) had always joked about being married to dirt farmers. They had their name.

Now about the whole brewing thing…step one was Bruce becoming a reasonably skilled homebrewer. As he was learning, his nephews Nick Zurschmeide and Wes Schoeb were graduating from school and didn’t have a firm path set as to their careers, so Bruce invited them to come onboard as assistant brewers with the possibility of one or both of them taking over the primary brewery responsibilities down the line. Both have obtained Siebel Institute brewing certification complimented by lots of on-the-job training on the new 10-barrel system Dirt Farm obtained via a broker based out of Seattle; it includes four 12-barrel fermenters. Also in the brewhouse now are six bourbon barrels from Kelvin Cooperage out of Louisville, Kentucky. Four of the barrels hold a barleywine they hope to pour in November, and two contain their Som-Peach Golden Ale that will likely be released in conjunction with the Peach Fuzztival at Great Country Farms.

The Zurschemeides know fruit. The main farm grows a variety of fruit, including peaches, cherries, strawberries, apricots, plums, all of which has found its way into Dirt Farm’s beers.

Generally, these beers will feature a particular fruit, but sometimes, say if it is near the end of the season, they’ll do a beer like their Flustercluck Ale, which includes apricots, peaches, strawberries, and nectarines. Such a beer depends on circumstances, and Bruce mentions, “We lost a lot of fruit to frost earlier this year.”

Dirt Farm is licensed as a farm brewery and already have about 2.5 acres of hops established (Nugget, Centennial, Chinook, and Cascade) and will have just recently harvested their first 10 acres of 2-row barley.

Bruce has a goal of “producing at least one beer that is 100% sourced from this property.” The hops and grain are well established and the yeast is in the works, thanks to none other than Northern Virginia’s yeast guru, Jasper Akerboom of Lost Rhino and Bright Yeast Labs fame. The brewery set out jars of yeast all over the 100-acre property and ended up turning over six of the jars to Jasper to see if a local yeast could be isolated. Jasper reports that there are several promising candidates.

As to the beer lineup, generally, the Tart 31 Cherry Ale, Work Session IPA, and Scott Brown Ale are intended to be the core beers with the rest varying depending on the seasonable availability of ingredients and whatever Nick and Wes want to brew.

Besides well-made beers and great views, Dirt Farm has always put out well reviewed flat bread pizzas, nachos, and boiled peanuts, supplemented by the occasional outside vendor for BBQ or oysters on special occasions or for special events.

Dirt Farm has successfully passed its one-year anniversary and the whole crew seems to be enjoying the ride. On a nice weekend day the place can be busy, and the ride up and down the mountain should be done…with due care, but up top you’ll find a comfortable rustic spot with plenty of room inside and out. There will probably be a goodly number of kids running around but they have the room and they make it work. The views are beautiful and the staff is always friendly. A farm, a winery, and a brewery on 400 acres in close proximity to each other and offering something for everyone. Just do it.

Find Dirt Farm on Facebook and online at dirtfarmbrewing.com.