Yeast is the Beast: How three scientists in Virginia are improving your craft beer 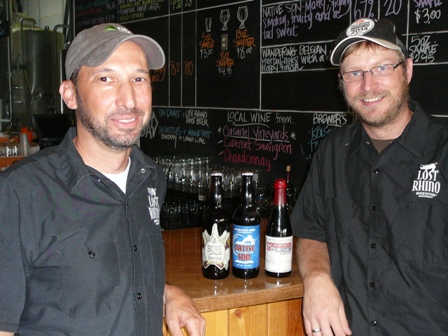 Yeast is like the “Rodney Dangerfield” of craft beer.   It doesn’t get any respect.  Craft beer drinkers talk endlessly about hops.  For a dark beer, you might even hear them mention the wonderful chocolate malt.   Doubtful you’ll hear much about what great yeast this is or where it came from.   Three scientists and their labs are starting to get yeast a lot more attention in Virginia.   Would it surprise you to know that the yeast in that beer you’re drinking may have come from a backyard in Ashburn or a farm in Goochland?  Would you believe it came from a 30 million year old whale skull or from a beer barrel used by a DC brewery that closed in 1917?

Reinheitsgebot, commonly referred to as the German Purity Law dictated that beer could only contain barley, hops and water.  Since this was first issued in 1487, it’s understandable that yeast was omitted.   It wasn’t until the 19th Century that Louis Pasteur confirmed the role of micro-organisms in fermentation.     Brewers now understand it is yeast that turns the grain sugars into alcohol and carbon dioxide.   No yeast, no beer.   So how did brewers make beer before they understood the science?    If you expose certain foods and beverages to the open air under the right conditions, they will ferment.   This is how pickles and sour kraut are made “no vinegar style”.   It’s also how wine, mead, and beer were first made.

A common fermentation practice is to “use a little” from the batch before.    Flavors and fermentation are more consistent using this process compared to using wild yeast.   Commercial brewers primarily use yeast that comes from a commercial lab.   Yeast libraries at these labs read a like a beer menu.   They are first divided into Ale or Lager strains and then grouped by style such as India Pale Ale.  Drill down to the yeast strain and you’ll get a name / description citing a specific beer and brewery.   In a way, brewers still borrow from the “batch before,” just not necessarily their own.   Since living organisms are difficult to patent, this is allowed.

Yeast impacts the flavor of beer.  If you have ever tasted a Bavarian Style Hefeweizen, you can’t have missed the yeast.    Hefe means yeast and weizen refers to the wheat in the beer.    Hefeweizen’s distinctive clove, bubble gum, and banana flavors derive from esters produced by Hefeweizen style yeasts.   Jason Ridlon, co-owner of RVA Yeast Labs, explains that even in beers where the yeast is not noticeable; the yeast impacts the flavor of the other ingredients.   Brew two beers exactly the same changing only the yeast and the beer will taste different.

Like your local chef, many craft brewers strive to use fresh local ingredients.   Virginia farmers are increasing their crops of hops and barley to feed this demand.   Favio Garcia, Director of Brewing Operations and Co-owner of Lost Rhino Brewing Company points out that brewers in legendary locations like Belgium didn’t set out to establish a style.  They were just brewing with what was locally available.   Garcia believes that as he and other Virginia Brewers use more local ingredients, such a “sense of place” will develop in the Commonwealth.    Until he met Jasper Akerboom at a Lost Rhino “neighborhood open house,” he saw yeast as the biggest obstacle to brewing  a 100% Virginia beer.   Akerboom told him about and later shared some of his home brewed beers made with yeast strains he had gotten from his back yard in Ashburn.   Garcia said “it was eye-opening that they were tasty”.  He was surprised that the local ingredient “that he thought would be hardest (to get) turned out to be the easiest.”

One of the strains of yeast Akerboom isolated from his back yard in 2008 (JY31-Nova Ale Yeast) was used to make Lost Rhino’s Farmwell Wheat in the summer of 2013.  Akerboom believes this was the “first Virginia sourced commercial yeast since prohibition.”  Because yeast is a living organism, it changes with each generation.  Sometimes the brewer likes the change and sometimes they don’t.    Although Garcia was happy with the flavor of Farmwell Wheat, there were problems with the early generations of the yeast.   “The first time we used it, it would not flux at all, bartenders thought we were crazy, (it was) like a milk shake,” according Garcia.   Akerboom explained that the rate that yeast sticks together and falls to the bottom of liquid is flux.  The faster it falls, the easier it is to work with.   Later generations performed better.  Akerboom freezes the yeast about every ten generations so that he can return to a previous preferred version if need be.

Native Son, Garcia’s realization of an all Virginia Beer was first released in August of 2013.  The second release of Native Son was in August of this year to mark Virginia Craft Beer Month.   Akerboom’s “back yard yeast” was used for both.   Native Son’s hand-crafted malts come from Copper Fox Distillery in Sperryville, its unmalted wheat is from Billy Dawson’s Bays Best Feed in Heathsville, and its hops were harvested in Leesburg at Sage Hill Farms.    Hop Harvest is available this month (October) from Lost Rhino.   Although the hops are from Madison County, the yeast was harvested the old fashioned way.   Akerboom got the “British style strain” from a beer made in Michigan.

Akerboom, originally from the Netherlands, wasn’t just your average home brewer.   When he first met Garcia, he was a chemist at Janelia Farm Research Campus.   Akerboom is now head of Quality Control for Lost Rhino.  He has also launched Jasper Yeast LLC. to supply yeast to other brewers.    Garcia is pleased that a brewery of Lost Rhino’s size has a full time microbiologist on the team.  He believes Akerboom’s addition supports Lost Rhino’s desire for quality and variety.   Garcia expressed “Experimentation is critical, is essential for a brewery to thrive, (we) have to make our core beers and make them well, but we also need to experiment – need an outlet.  Things you learn along the way help to make your core brands better. Everyone makes pale ale and IPA’s; (we) need something to stand out”.

At the request of a friend, Akerboom took yeast from fossils including an ancient whale bone.  The yeast he isolated “doesn’t like high alcohol, it just stops and starts.  Tested five times before we found a strain that worked” according to Akerboom.   The aptly named Bone Dusters Amber Ale was made using this “whale” yeast in June.   The second release of Bone Dusters is planned before year end.   Akerboom is now working with yeast isolated from a beer barrel that Alexandria Archeology believes came from a Washington, D.C. brewery that closed around 1917.  In both cases, Akerboom points out that the age of the yeast is unknown.

In December, 2013 two scientists launched RVA Yeast Labs LLC in Richmond.  Malachy McKenna has a Masters of Science in Chemical Ecology and teaches biology.   Jason Ridlon has a PH.D in Molecular Biology and teaches undergraduate and graduate classes in microbiology and fermentation.   He also does research for the Department of Veteran Affairs.    McKenna and Ridlon have been home brewing together since 2011, often using yeast they isolated in the wild or from beer bottles.   Since the U.S. brewing renaissance started in the west, that is where most domestic yeast labs are located and where most Virginia brewers get their yeast.    McKenna and Ridlon believe that they can help east coast brewers make better beer.   Ridlon explains their role this way; “The health of the yeast is critical to how they perform.  That’s what we’re about…a local producer where people order it and we grow it up fresh.”

McKenna and Ridlon are already impacting the craft beer you drink in Virginia.  Big Lick Brewing Company in Roanoke used only RVA Yeast Lab yeasts for their grand opening beers in September.   Bryan Summerson, Big Lick’s owner and brewer, has been pleased how the yeasts have performed with his American Home Brewers Association medal winning Cream Ale and English Brown Ale.   He used RVA 104 yeast derived from Alchemist’s Heady Topper for his Double IPA and RVA 262 Saison yeast to make a dark Saison.  Summerson says he bought from RVA Labs because it’s local, costs are good, and you can’t get much fresher with such a fast delivery.   Jeremy Wirtes, Brewmaster and Co-Owner of Triple Crossing Brewing Company in Richmond shared the same sentiments.  In mid-August, Triple Crossing brewed a seven barrel batch of Falcon Smash IPA using RVA Yeast Lab’s American Ale strain RVA 105 for the first time.   Wirtes says from the “beginning pilot batches he has been more than impressed with the performance of RVA Yeast Labs strains. As a total yeast nerd, having these guys (Mckenna and Ridlon) open their business in central Virginia is huge for all of the craft breweries.”  Isley Brewery used one of RVA Yeast Lab’s “Belgian” strains for a Belgian Style Double around Labor Day.   Brewer Brandon Tolbert has been experimenting with RVA’s strains in pilot batches for the planned Answer Brew Pub brewery.

The RVA Yeast Labs web site lists four lager strains and twenty-four ale strains available for purchase. RVA 804 Orchard Brettanomyces is listed under “Native Yeasts” as the “first yeast strain isolated in the 804”.  McKenna and Ridlon sourced this yeast from Carters Mountain Orchard in Charlottesville.   Earlier this year, McKenna and Ridlon isolated yeast from a beech tree at Lickinghole Creek Craft Brewery in Goochland County.  They then brewed a Triple Ale with this yeast and shared it with the team at the brewery.   Sean- Thomas Pumphrey, Co-Founder and Chief Beer Officer at Lickinghole Creek Brewery admits he “was pleasantly surprised how good it was, candidly I had low expectations.”    McKenna and Ridlon have provided the brewery a quantity of this yeast for pilot batches.  Pumphrey and team plan to brew what may be Virginia’s first modern estate beer.    All ingredients would be sourced from the brewery’s 260 acre farm including the yeast.   You can’t get any more local than that.   Maybe that will get yeast a little more respect.