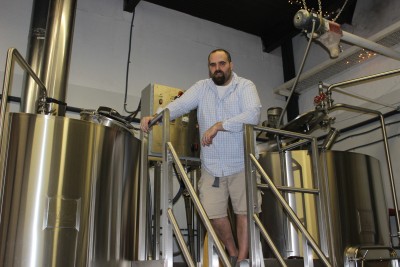 “The British are coming! The British are coming!” Paul Revere, right? Well, yes, but did you know that there was another lesser known, but equally important hero who also warned of an impending British attack. His name was Jack Jouett. In June of 1781, Jouett learned that General Cornwallis ordered the capture of Governor Thomas Jefferson and his fellow legislators who had retreated to Monticello after an attack on Richmond. Jouett rode forty miles along a moonlit trail marked with three notches axed into the trees to warn Jefferson of the impending attack. The trail became known as Three Notch’d Road and it is from these origins that Three Notch’d Brewing Company takes its name.

As with many breweries, Three Notch’d Brewery started with three friends who were looking for a way to pay for their drinking habit. Derek Naughton, Scott Roth, and George Kastendike first started talking about the idea of a brewery in April 2012, when they were out socializing at a local restaurant. After crunching the numbers, they realized that they could really make this work and take their miniature basement brewery idea and expand it to a full-fledged brewery. In August 2013, their dream became a reality!

I had the opportunity to sit down with Dave Warwick, Head Brewmaster, and learn more about their journey, mission, and fine line-up of beers. Warwick started our conversation by saying, “I have always been attracted to the beer industry.” He tells me that since 1997, he has had various jobs related to beer from bouncing to restaurant management to retail. He even worked for a Coors wholesaler in Pittsburg. He says, “I loved the beer industry, but got burned out from the sales side.” In 2006, Warwick was accepted into the competitive craft brewing apprenticeship program at Rock Bottom Breweries. After two years, he was given his own brewery in Colorado and shortly after that relocated to Virginia where he was the Brewmaster at Rock Bottom Brewery in Arlington for 3 years. It was at the Virginia Craft Brewers Fest held at Devil’s Backbone in 2012 that Warwick first met Naughton, Roth, and Kastendike. Warwick explained that the three are a really well-rounded team each focusing on their area of expertise whether it’s marketing, operations, or finance. Warwick completes the team as head Brewmaster.